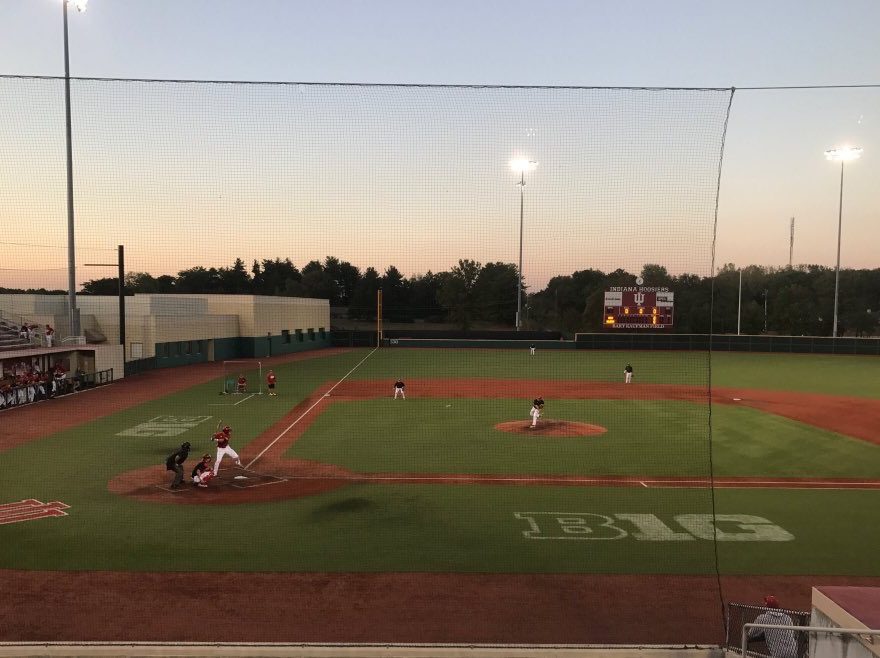 Our statistician, Cassady Palmer, took a quick break from the Numbers and gave us this to share with everyone.

Twas the night before baseball when all through the stands
Not a creature was stirring, not even the fans.
All the jerseys were hung in the lockers with care.
With plans that the players soon would be there.

The Hoosiers were nestled all snug in their beds.
While visions of Omaha danced in their heads.
And the staff with game plans and Coach Lemo in hat
Had just settled in to review the at-bats.

When out on the field there arose such a clatter,
They sprang to the Bart to see what was the matter!
Away to the concourse they flew like a flash!
Then down to the diamond they ran with a dash!

The glare of the lights on the turf we all know
Gave the luster of midday to the ballpark below.
When what to their wondering eyes did appear
But an impromptu game with the season so near.

With a pair of captains so ready to play,
They knew that the team could not wait another day.
More rapid than Boilers their teammates they played.
Ryan and Pauly shouted and called them by name:

As dry leaves that before the wild hurricane fly
When the bat meets the ball, it is launched to the sky!
So back to the dugout the players they flew,
To trade bat for glove and talk to Coach Z too.

And then, take a look, who’s joining the group?
But the man with the hustle, the one they call Coop.
As the game resumed and pitches flew from the mound
Coop ran after foul tips and never backed down.

Now Coach Z was in charge, giving lots of direction
To make sure that the team could pass his inspection.
He sat in the dugout and thought of the past,
Of all the old teammates who had been quite a blast.

Of course there was Skip, the man with the plan,
And Schwarber, and Travis, and of course the Scatman.
There was Johnson, and Deeds, and Kyle Hart too.
Oh how he could list off the players he knew!

Back to the game on the field here and now
The players were ready to bring on the wow.
Coach Z smiled and grinned and turned right around,
For he knew they were ready to be Omaha bound.

He caught sight of Coach Lemo and shouted his praise
And encouraged the team to continue its ways.
Coach Lemo gave a wink and a twist of his head,
Which gave me to know I had nothing to dread.

He spoke not a word, but went straight to his work,
And thought of the season with his own little smirk.
He knew that the stands would be filled soon enough,
And the fans would yell “BALK” and other fun stuff.

He went to his office, to his team gave a whistle,
And home they all flew like the down of a thistle.
But I heard him exclaim, ‘ere he drove out of sight
“Happy Season to all, and to all a good night!”