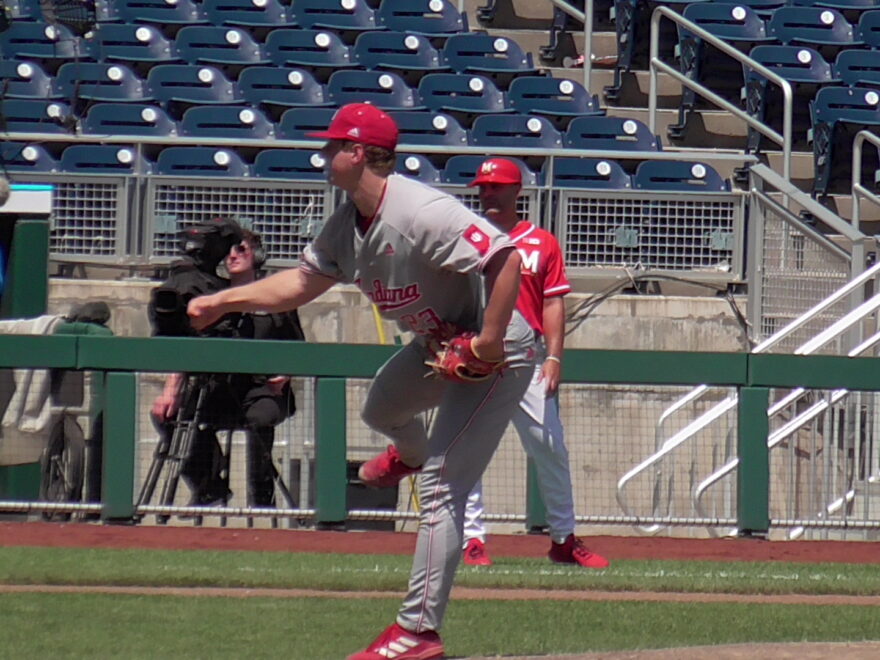 The Indiana University Baseball program has become known in recent years for developing professional pitching prospects. After a year under new pitching coach Dustin Glant, who coach Mercer hired out of the coaching ranks of the New York Yankees, the trend continues. Jack Perkins, Bradley Brehmer, and Reese Sharp all got called in the 2022 MLB draft this past week.

Jack Perkins came to IU as a grad transfer. The right hander out of Kokomo, Indiana, finished his degree in three years at Louisville, but had been relegated to the bullpen there while battling injuries. At Indiana, Perkins earned a weekend rotation spot and was solid start to finish culminating in a great performance starting on short rest against Maryland as Indiana became the only 8-seed in Big Ten Tournament history to eliminate a 1-seed.

Perkins joins Brown (2021 3rd round) and Jonathan Stiever (2018 5th round) as recent Hoosier pitchers to be drafted in the top 5 rounds. Perkins was tabbed by the Oakland Athletics. Perkins utilized five different pitches in 2022 to keep hitters off balance.

The remaining Hoosiers were both tabbed by the Baltimore Orioles. Brehmer was taken in the 12th round, and Sharp heard his name in the 20th and final round. It was the second time Baltimore has tried to woo Brehmer as they attempted to sign him in 2018 out of high school. This is also the second time Sharp has been drafted, though he didn’t sign a pro contract coming out of high school and elected to go to college.

Bradley Brehmer was originally recruited by Coach Jeff Mercer to pitch at Wright State. After a solid run in Ohio, Brehmer got to actually pitch for Mercer as a transfer student. Brehmer struggled with command in both a fall matchup against Cincinnati and the 2022 opener at Clemson. He quickly got it together in a couple of appearances. By the time he earned a start he was proving to be a very reliable and deep Saturday starter. Brehmer finished the season on a huge high note, with an All-Big Ten Tournament performance in a 1-run, 4-hit, complete-game that setup the Hoosiers for the epic take-down of Maryland the next day.

Reese Sharp rounds out the 2022 Hoosiers drafted. Sharp also had a remarkable improvement to his season and shined under the lights in Omaha during his final outing. His 5.1 inning, 9 strikeout relief effort against 1-seed Maryland in the first round gave the Hoosier offense an opportunity to mount a comeback that forced extra innings. Sharp was almost un-hittable once he got command of his elite stuff. He was raising eyebrows among pro scouts with elite spin rate in summer league play in 2021.