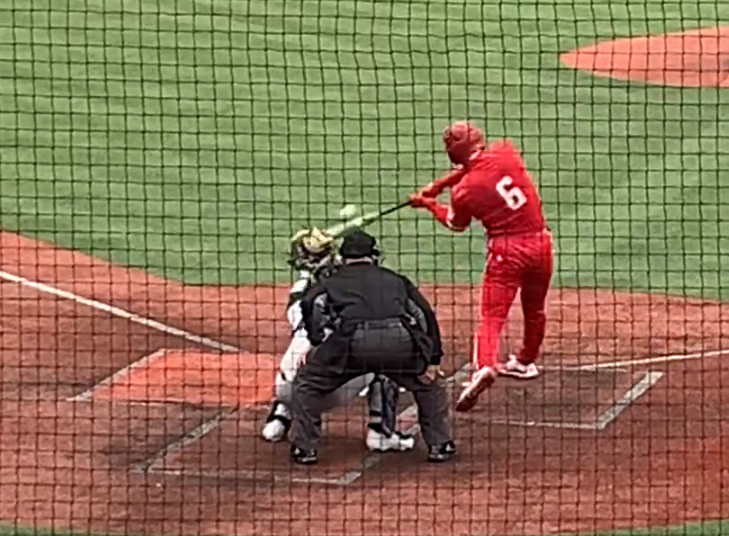 It was a cold day in East Lansing with the wind blowing in. Indiana was set down 1-2-3 in each of the first two innings. Michigan State managed a lead off walk in each of the first three innings off Gabe Bierman. The first inning saw no damage, but Bierman gave up two RBI doubles in the second and a sacrifice fly in the third.

Michigan State’s freshman lefty Nick Powers was very effective with two 1-2-3 innngs to start the game. Sam Murrison started the hitting for Indiana with a single to lead off the third inning. Collin Hopkins moved Murrison over with a nice sacrifice bunt but he was left there. Cole Barr did the same in the third, but again no runs.

Bierman managed to get the lead-off man in the fourth and got out of the inning with only a base runner and no runs. Lefty Ty Bothwell took over the pitching duties in the fifth.

Bothwell kept the trend up by walking the lead-off man, but managed to get that guy out on a botched suicide squeeze that Bothwell fielded and forced a run down. He then ended the inning with a looking strikeout.

Bothwell also faced trouble in the sixth with a lead-off double. A defensive miscue extended the inning where the Spartans scored two unearned to take a commanding 5-0 lead.

Hoosiers finally responded in the top of the seventh. Jordan Fucci got a double and Jeremy Houston had a big hit to right to drive in the Hoosiers’ first run. That also forced Spartan Coach Jake Boss to go to the bullpen for the first time in righty Burrell Jones.

Bothwell produced the first 1-2-3 inning for Hoosier pitchers in the bottom of the seventh. The eighth started promising when Richardson lead off with an HPB. However, Barr struck out and Toetz hit into a double play to end the inning.

Bothwell allowed a lead-off double in the bottom of the eighth but worked out of it with two strikeouts and ground out. Fucci got on via his second hit to start the Hoosiers with one out in the ninth. Murrison kept the inning alive with a single, but Jones got two more outs sealing the win for the Spartans.

Ashley extended his on base streak to 39 games, but the Spartans snapped the full season hit streaks for both Ashley and Toetz. The loss drops Indiana to 11-3 on season and cuts the Hoosiers’ lead over Michigan in the Big ten to only a half a game.

Indiana has a big test as the road swings shifts to Columbus, Ohio, next weekend when the Hoosiers have a 4-game set against the Ohio state Buckeyes.