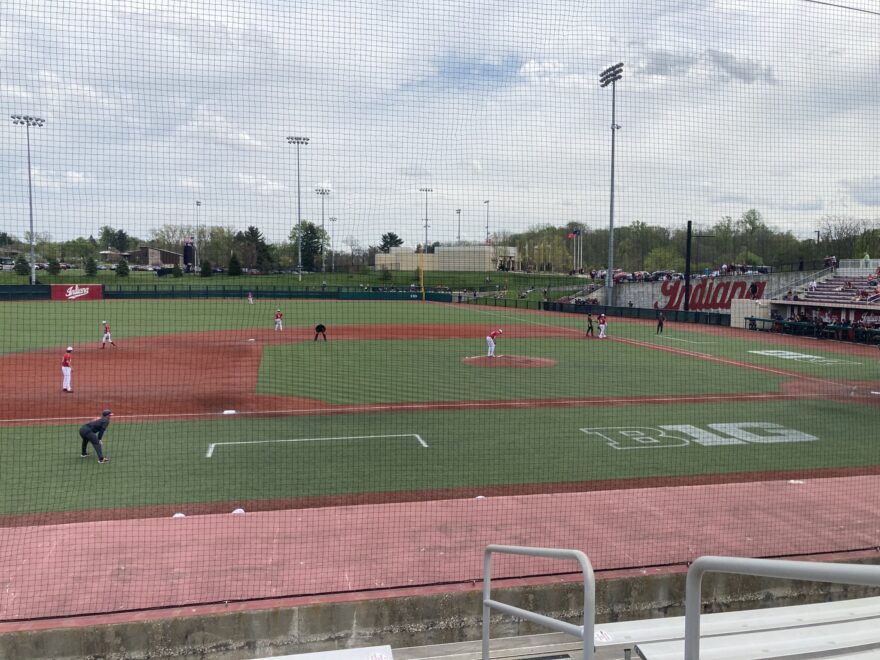 The Illini scored Saturday before Hoosier starter Bradley Brehmer could record his first out, with back-to-back hits putting them on the board to lead off the game. Brehmer was roughed up for eight hits and eight runs, though only 6 runs were earned on a day Indiana’s defense might wish they could have back. Brehmer still hung a few breaking balls though and got hit hard.

Indiana’s offense hit the ball okay, but mostly right at Illinois defenders. Illinois starter Jack Crowder went six innings, giving up five hits and only one run (a Carter Mathison moonshot in the bottom of the sixth).

The Hoosier’s best chance to score early came in the second Crowder walked the bases loaded with no outs but escaped unscathed. The sophomore has struggled with his command at times this season but only walked one on the day outside of that second inning. Indiana stranded 13 runners over the course of the game.

“I would say primarily because the line drives that were hit, they caught ’em, and so that makes it a little harder to have a big inning. Our first four outs were line-drive outs and they made a couple really nice plays,” said Coach Mercer. “And then that guy did a good job. He executed pitches when he had to, and we weren’t able to breakthrough.”

Brehmer started the top of the sixth, but Illinois knocked him out of the game with a walk and single. Ryan Kraft entered the game in the sixth for the Hoosiers with runners on the corners and one out. He forced two quick ground balls, but both led to runs instead of outs. The inning included a number of difficult defensive plays that were ruled as hits but probably should have been handled better by an infield.

‘“The big thing they [Illinois hitters] do is they don’t give any at-bats away. They don’t strike out and hit the ball the other way with two strikes. When they put enough balls in play, you gotta be able to defend. So maybe Brad wasn’t as sharp as he has been, but we also had plenty of opportunities to make plays behind those guys,” said Coach Mercer.

Trailing 9-0, Kraft missed a throwback from Ellis (which scored a run), walked a guy, then gave up a three-run bomb to all but seal the Hoosiers’ fate. The Illini would go on to score 10 total in the inning off eight hits and go up 16-0 in the game. The bad luck inning didn’t end until Max Johnson caught a ground ball that ricocheted off of Tyler Doanes and dove to beat a runner to second base.

From there, with much lower stakes, Indiana’s fortunes changed slightly for the better. The circumstances allowed for the deployment of some lesser-known faces, and Indiana’s offense started finding gaps late in the game. Evan Goforth (three hits, five RBIs) doubled home Max Johnson in the seventh. Peter Seruto (two hits, two RBIs) had a pinch-hit two-run blast in a five-run eighth. Jack Walker only gave up one hit in 2.1 innings of relief (it happened to be a 2-run homer but that guy had five hits today). David Platt pitched a clean ninth and the Hoosiers managed three more runs in the bottom half to make make it 18-10.

“It’s a talented offensive group up and down the lineup, which makes it hard sometimes to make the lineup, but I was really happy to see those guys get in there and have success and compete because they’ve worked their tail off,” Mercer said.

It’s still really, really hard to win a game though when you don’t score till you’re down 16. The comeback stalled and Illinois tied the series.

Up next on the docket is a massive game three rubber match at Bart Kaufman Field Sunday. Indiana, now 19-24 overall and 5-9 in B1G play, badly needs conference victories. The game is set to start at 1 PM with Indiana’s starter still TBD. Riley Gowens will pitch for Illinois.