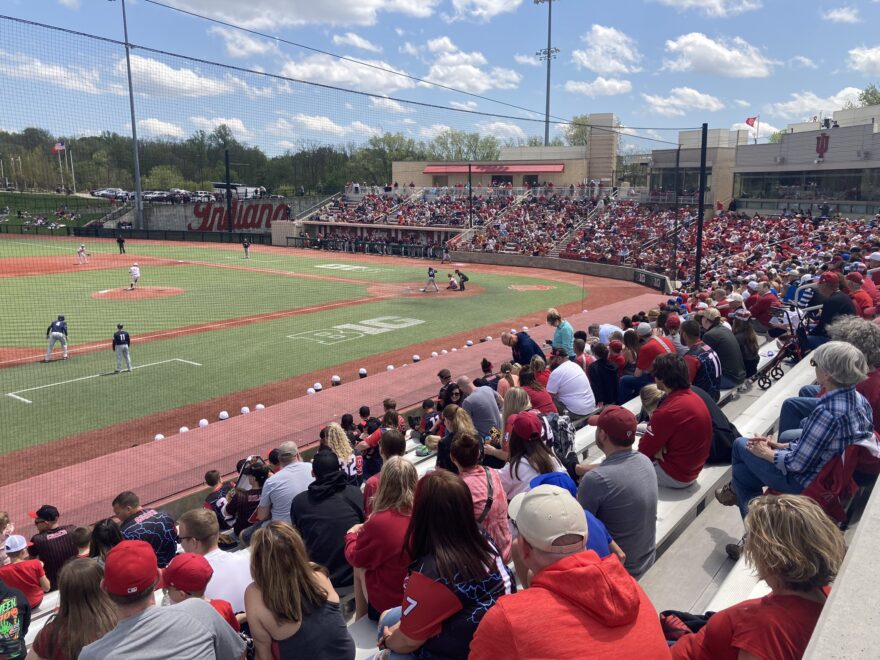 Five days after leading the Hoosiers to a win in his start at Victory field, Braydon Tucker took the mound for the Hoosiers in game three.

He struggled out of the gate with his first two batters reaching base and later scoring, but he battled to limit what could’ve been much worse. Though it was evident early that he didn’t have his best stuff today, he held the Illini to two in the top of the first.

After falling into an insurmountable 16-0 hole a day ago, the Hoosier offense wasted no time firing back in the rubber match. A couple of free bases for Hunter Jessee and Josh Pyne set up Carter Mathison for one of his two home runs on the day in the bottom of the first. Mathison’s bomb put Indiana in front 3-2 and moved him to second all-time in home runs for IU freshmen (trailing only Alex Dickerson’s 14).

“Carter is a guy that has an incredibly high ceiling, but there was some length to his swing and the velocity of the game was abrasive to him in the fall,” Mercer said. “You’re seeing the power come because he does have such a large engine and the ceiling is so high. What’s happening is as he’s tightening his swing up, he’s getting a better feel for the game, and there’s not as much drift in his body and as much length in the bat…Early in the year, you could beat him in and you could beat him up. You could go hard in, you could go hard up and he would get beat on both. Now that he’s tightened that up and moves a lot tighter, there’s just no hole.”

Tucker would breeze through the second with no issues but a 2B, HBP, HR, 2B start to the third forced him out of the game. Ty Bothwell took over with a runner on second, still needing three outs. A quick ground ball gave them one but moved the Illini baserunner to third, then a tough balk call on Bothwell scored that runner. Two hits and an error plated one more before the end of the inning and the Illini led 7-3 after three.

On the offensive side, Hoosier bats went cold for innings 2-4 but erupted in the bottom of the fifth for eight hits and eight runs. Evan Goforth, Peter Seruto, and Bobby Whalen opened the frame with three-straight singles for Indiana.

Hunter Jessee and Josh Pyne followed with back-to-back doubles, then Mathison went deep again, his 13th longball tying Matthew Ellis for the team lead. Not to be outdone, Ellis stepped in two batters later and launched a 465-foot two-run shot of his own to right. It was his tenth 400+ foot bomb of the season and gave Indiana an 11-7 lead.

That score would hold for the duration of the game thanks to a superb (sharp?) outing by Reese Sharp. Facing an offense that had put up 25 runs in its last 14 innings (with the wind blowing out), Sharp tossed 4.1 innings of brilliant relief for the Hoosiers to close out the game.

Sharp is the latest reliable arm to have emerged from relative obscurity for the Indiana bullpen. After a slow start to the season, Coach Mercer said the team has played with his usage recently, opting to mix in both of his off-speed pitches against all opposing batters instead of primarily throwing the slider to righties and curveball to lefties. Sharp has closed out wins in each of his last four outings for the Hoosiers and shown noticeable improvement pitching with runners on base.

“[That was] one of the best pitching performances I’ve ever seen…When a kid’s having the performance of a lifetime, just get out of his way. When a superstar is being a superstar, just get out of his way. That was the thing for Reese today,” Mercer said. “The growth of the bullpen is predicated on getting those guys out there. I know sometimes it’s gotten ugly, but they gotta grow up. There’s just no substitute for experience.”

Earning a series win over a serious conference contender in Illinois is no small feat, but to a  team that’s displayed steady improvement over the course of the season, it comes as no surprise. Coach Mercer’s squad has been forced to demonstrate depth at key positions due to injuries, but the likes of Max Johnson and Evan Goforth have made the most of their opportunities in place of veteran starters.

The much-maligned bullpen has shown significant progress this season, adding a name to their list of trustworthy arms almost weekly. From Holderfield to Bothwell, and now to Sharp, the Hoosiers sport a staff that can confidently hold down the back end of most games for a team whose offense (largely powered by more talented freshmen in Mathison and Josh Pyne) has proven capable of scoring double-digit runs any given day.

If current trends continue, it’s not out of the realm of possibility that Indiana could not only qualify but make some real noise in the B1G tourney.

The win improves the Hoosiers’ record to 20-24 overall and 6-9 in conference play. Up next the boys head to Ann Arbor for a set with Michigan where they’ll attempt to continue their journey back to .500. As things stand right now, Indiana is still battling it out for one of the final seeds in the tournament. Game one is scheduled for Friday at 6 PM and should be broadcast on B1G+.