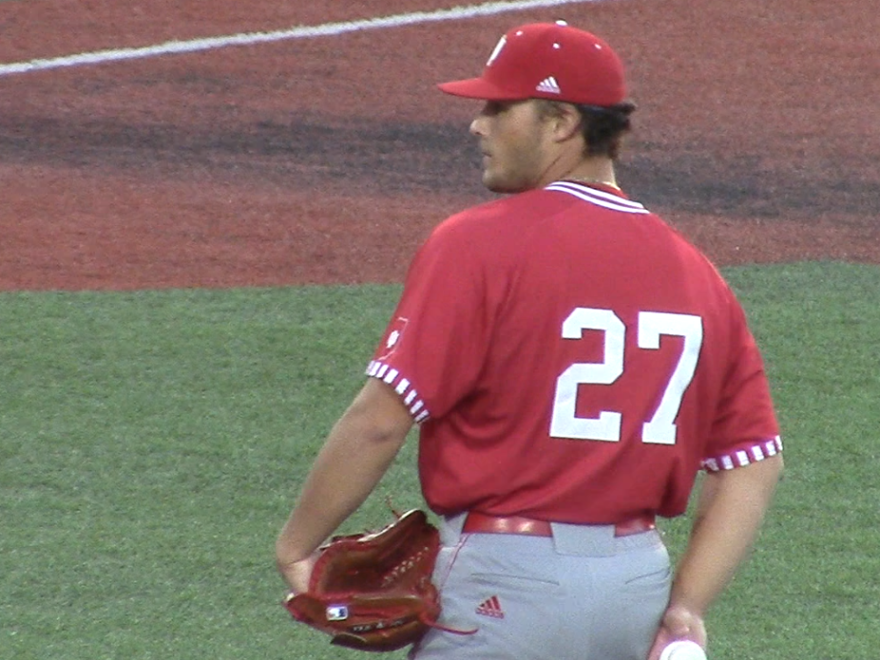 Reese Sharp at Cincinnati – photo by Carl James for iubase.com

For the second time in the doubleheader, wild starting pitching was the story for the Hoosiers. In the second game of the day John-Biagio Modugno, despite starting with a 3-0 lead in the bottom of the first, walked the first three Trojans he faced, gave up four earned runs, and was pulled with only two outs recorded (both by strikeout).

That lead was built up with every Hoosier stepping up to the plate in the top of the first inning. Bobby Whalen and Matthew Ellis reached by singles before Brock Tibbitts took a walk. Hot hitting Josh Pyne hit a two RBI single and then Morgan Colopy got his only hit of the entire weekend, plating Tibbitts. The bases got loaded up again before catcher Peter Serruto made the final out with a pop up. Indiana tied the game with a 457′ Tibbitts solo home run to left in the third inning.

The bright spot for the game fro the Hoosiers on the mound was Reese Sharp who was dominant for 5.1 innings of work. Sharp struck out seven Trojans, and gave up only one run on a walk and double in the sixth inning. He had multiple pitches working including great movement on his breaking ball paired with good location of his fastball.

The Hoosiers were down 7-4 going into the ninth inning. Indiana managed to bring Matthew Ellis up to the plate representing the tying run. Troy pulled their closer for a left handed match-up option in Rigsby Mosley to face the B1G home run leader. Mosley won the match-up by getting Ellis to ground out to end the game. Indiana got 9 hits on the day, compared to only 5 for Troy.

The loss drops the Hoosiers to 6-9 on the season. Indiana will now come home to play 12 straight games at Bart Kaufman Field. The first of those will be Tuesday at 5pm against SEC foe Kentucky.