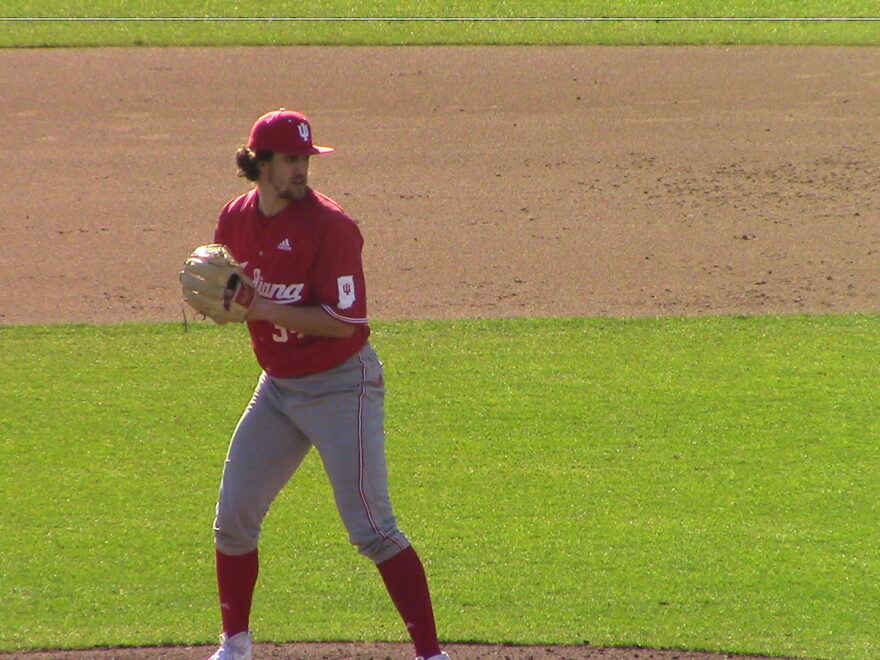 A wild start for Brehmer opens the double header

photo of Braydon Tucker at Clemson by Carl James for iubase.com

Bradley Brehmer was a bit more wild in his start this week and it was costly for the Hoosiers. Going only 3.2 innings to open up a double header, Brehmer gave up five runs, all earned, walking three, hitting one, and throwing three wild pitches. Brehmer was effective in his first two innings, but one of his walks scored on a two RBI double to tie the game in third inning.

Offensively, Indiana jumped out to an early lead in the top of the first inning. Tyler Doanes got on with a single and scored on error following a Phillip Glasser single. A pair of productive ground outs plated Glasser. Hoosier bats then really came alive in the top of the fourth inning. Matthew Ellis lead off with a double. Josh Pyne and Carter Mathison each had RBI hits to give the Hoosiers back the lead at 4-2. That would be the only production for Indiana.

The game was essentially decided in the bottom of the fourth when Brehmer was unable to get a shutdown inning. A lead-off single advanced into scoring position on a ground out. Then two wild pitches plated the run. A walk put another runner on and Head Coach Jeff Mercer then went to Braydon Tucker out of the bullpen. Tucker hit his first batter with a pitch and gave up an inherited run on an RBI single before ending the inning with a flyout.

Tucker ended up giving up a run of his own in the sixth, but managed to save the bullpen in hopes of salvaging a game on the road trip by pitching a total of 4.1 innings and finishing the game. Together, Brehmer and Tucker only gave up six hits in eight innings but the costly mistakes seemed to mount up.

The Hoosiers will attempt to leave Troy on a better note when John-Biagio Modugno starts the series finally after a short break.