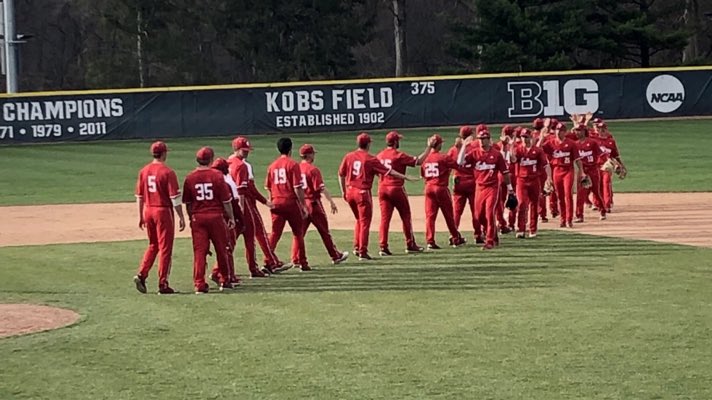 Sparty pitchers silence the Hoosier bats in game one, but can’t find an answer in the rubber match.

After a dominant win Friday night, the Hoosiers were hoping to come out on Saturday to win the series and set up a sweep on Easter Sunday. Well, the weather had different plans and washed out Saturday, and perhaps the momentum of the 9 game winning streak, setting up a doubleheader on Sunday.

The first game on Sunday started as a pitchers’ duel with both teams held scoreless through 5 innings.  The Hoosiers drew first blood in the 6th via a Matt Lloyd RBI double, and a Cole Barr Sac Fly to take a 2-0 lead.

The Hoosiers then added to that lead in the 7th with a Justin Walker solo HR to take a 3-0 lead. MSU came alive in the bottom half and put up 5 runs, capped off with a 2 run suicide squeeze! As anyone who follows baseball knows, each game you watch there is the possibility of seeing something that you’ve never seen, or even thought of before.  Definitly add that to the list.

That would be the end of the scoring for both teams as the Hoosiers took the 5-3 loss, giving Sparty their first B1G win of the season.

The Hoosier bats came out on fire right out of the gate in game two on the day, with Matt Gorski giving IU a 2-0 by mashing his 11th HR of the season. IU added two more in the 4th on a 2 run RBI double by Eli Dunham, and tacked on one more in the 6th on Justin Walker’s second solo shot on the day.

While this was happening, Andrew Saalfrank was doing exactly what he has been for his last handful of starts… absolutely dominating, with his lone hiccup being a solo shot in the 6th inning. His final line was 7.0 IP, 1 ER, 2 H, 1 BB, and 11 K.

In the 8th IU took advantage of Michigan State miscues and added on 4 unearned runs highlighted by a Gorski 2 RBI double, and Lloyd RBI single. MSU did manage to answer with a single run in the bottom half via a bases loaded walk.

Wyatt Cross put the exclamation point on the day by crushing a no doubt 2 run HR in the 9th, setting up a final score of 11-2.

With the win, the Hoosiers are now in first place in the B1G over Nebraska with a .750 vs .733 win percentage in conference play.

Next up for the Hoosiers is a meeting against Ball State at Victory Field at 7:00 on Tuesday night where they will be looking for the season sweep after knocking them off last Tuesday at The Bart.