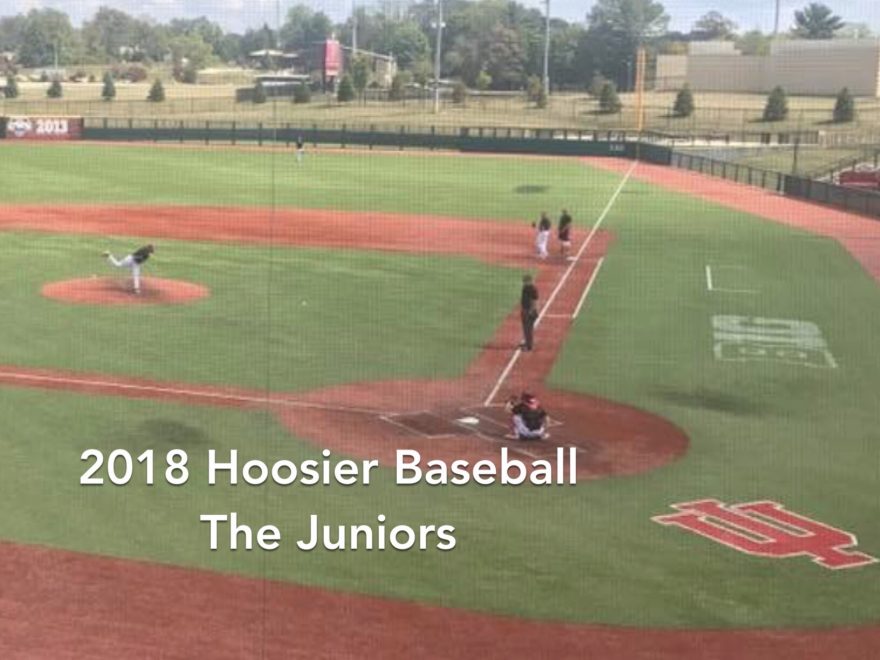 InfIelder, JuCo transfer from Madison College. Made 16 starts for Kansas State his Freshman year (2016). In ‘17 for Madison College he started 37 games and His splits were .291\.413\.575 while leading the Wolfpack in Homers (8) and second in RBI (37). Has a great chance to take over for his childhood friend and fellow Cheesehead Tony Butler at 2B.

Lefty Relief Pitcher.  Plus plus slider (just ask Brendan McKay). Had a 15 inning scoreless streak in ‘17. Has proved to be a multiple inning guy, with the possibility of breaking into the starting rotation this season.  3 multi inning saves in ‘17.

Weekend Starter, voted a co-captain by his teammates for this season. Became a starter in late March. The Hoosiers went 8-1 in games he started to close out the season. His 9 punchouts in the 2017 Regional vs NC State, was a season high for the team. Named Hoosier Baseball Pitcher of the year for ‘17.

Starting Catcher, also voted a co-captain by his teammates. Big time arm behind the plate that has mastered the back pick. 23 multi hit games in his career, 70 grade bat flip. His first career triple coming in ‘18. Personal Season Goal ? ‘To Dogpile’

Friday Night Starter, an experienced power arm and outstanding control. Had a 17 inning scoreless streak in ‘17 including two 1-0 wins and the rain shortened Maryland start. Velo was up in the fall (hit 95), and he led The Cape in K/BB ratio in’17. Threw a complete game shutout in NCAA Tournament Elimination Game last season vs Ohio U.

Transfer From John A. Logan, projected to start in CF. Great speed. Splits last season were .354/.431/.530, with 11 doubles, 3 triples, 6 homers. 17 steals and only caught 4 times. Showed great defense, speed and power in Fall Ball and so far in the preseason

Up next in the series will be the 2018 Sophomores.