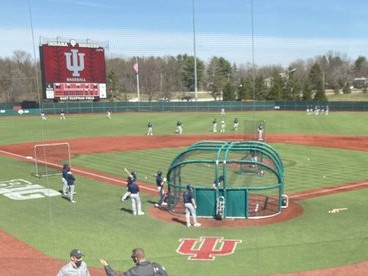 According to the release Coach said, “This morning I tested positive for COVID-19. I’m experiencing minor symptoms and will now enter my 10-day isolation period. I look forward to communicating with the team during my absence and rejoining the team when it’s safe to do so.”

At 9:09 pm Friday night, the program released an updated schedule for the weekend, seemingly indicating that further COVID-19 concerns from additional testing were not significant.

Saturday will see a doubleheader starting at 1pm, Sunday at 12 noon. Both will feature a 7-inning opening game, followed by a 9-inning nightcap.

The Hoosier pitching rotation was announced to be Tommy Sommer, Gabe Bierman, McCade Brown, and Ty Bothwell in that order. When this was originally announced that would have meant that only Bierman was pitching in a 7-inning game. The schedule has changed twice since. Now with the current announced schedule Sommer and Brown will have the 7-inning games. If length of game was part of the rotation strategy, it is possible the order of the rotation might change.

iubase.com as credentialed media will have representatives at Bart Kaufman Field covering the series. We will continue to update you on information via @iubase17 on Twitter throughout the weekend as we get it.