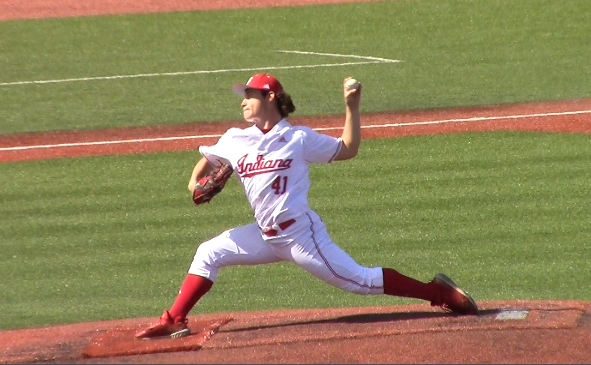 Hoosier bats stifled as the losing skid extends to 4 games

Indiana had five hits is the first two games of the series but started the third game of the series with Drew Ashley and Grant Richardson getting on with hits. Then the ghost of the earlier game came back with three straight strikeouts.

Ty Bothwell took the bump for Indiana and struck out the first two hitters to start the first inning. Then the Buckeyes’ Zach Dezenzo hit his second solo shot of the day to get Ohio State on the board first. Bothwell walked the next two batters and then gave up an RBI single.

Hoosiers threatened again in the third when Ashley walked and Barr got on via a hit-by-pitch. Again Ashley was stuck on third as Indiana batters went down on strikes.

The fourth inning both teams chalked up a solo home run. Grant Macciocchi hit one oppo in the top and Mitchell Okuley answered in the bottom. Cole Barr added his second home run of the series and season to cut the Buckeye lead to one. The Hoosiers would not score again.

Bothwell almost got through 5 full, but a Paul Toetz error extednded the inning and pitching coach Justin Parker went to the bullpen in Nathan Stahl.

Ohio State added two key insurance runs in the eighth, one unearned, after Stahl loaded the bases. The Hoosiers loaded the bases for Cole Barr in the ninth but was put out via infield pop up.

The Buckeye’s are now only a half a game behind Indiana who just fell to third place in the Big Ten standings. Tomorrow’s series finale will determine which team has the advantage over the other heading into week six.