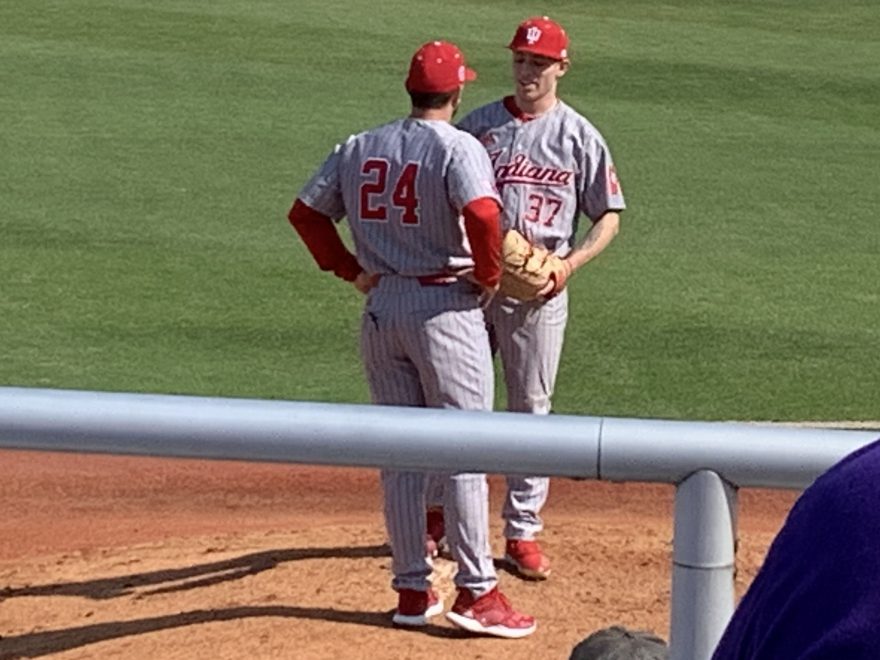 Before Sunday, Gabe Bierman had not looked like the ace pitcher we remembered from the brief, but strong 2020 campaign. He was absolutely that today, but it takes more than a good starting pitcher to win a nine inning baseball game, and almost nothing else worked right for Indiana as Ohio State walked off the Hoosiers 4-3 to complete a devastating 4-game sweep.

In the sixth inning Ohio State’s Mitchell Okuley got on via and error by catcher Collin Hopkins. A single and a walk loaded the bases. Bierman gets Kade Kern to pop up in foul territory on the right side. What looks like an easy play for Jordan Fucci, becomes more difficult when second baseman Paul Toetz collides with Fucci who still makes the grab. The collision allows Okuley to tag up and score.

Prior to that Indiana had a 1-0 lead thanks to an error on a Houston ground ball which allowed Grant Macciocchi to score. The Hoosiers appeared to have scored in the top of the 7th on an errant throw by the pitcher, but Toetz was ruled out by interference for running inside the base line.

Morgan Colopy hit a ground rule double and then scored on an error in the top of the eighth. Drew Ashley then doubled to drive in another run. That gave the Hoosiers a 3-1 lead with 6 outs to get.

John Modugno was given the ball for the bottom of the eighth. He had pitched two innings in Friday’s loss. Modugno struck out Sam Wilson, but walked Okuley and then gave up three straight hits to allow Ohio State to tie the game.

The bottom of the ninth inning started much the same with an out and a walk. Two singles secured the sweep for the Buckeyes. Of the four runs scored by Ohio State, 2 reached by walk, one by error.

The Hoosiers entered the series in the lead of the Big Ten standings. The sweep dropped the Hoosiers into fourth place, two games behind league leader Nebraska. The Hoosiers have 26 games left. Over one third of those are with the teams ahead of Indiana in the standings. The good news is there is plenty of opportunity to inflict damage on those teams. The bad news is that with 8 out 11 wins coming from the bottom three teams in the league, Indiana has yet to demonstrate an ability to beat top teams.