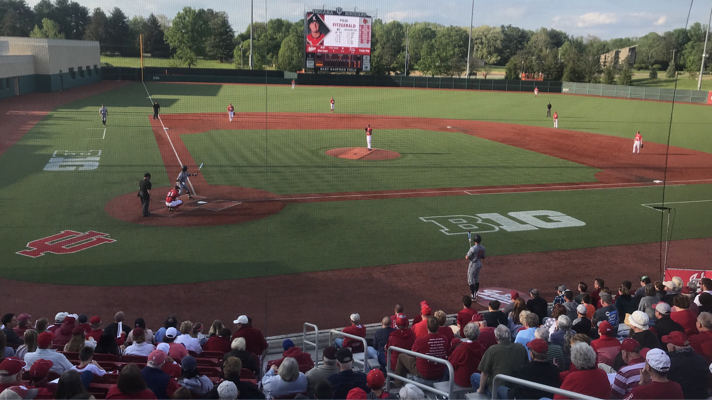 Indiana battled back from a 6-0 deficit to take things in to extra innings, but mental mistakes and untimely blunders canned the Hoosiers’ hopes against seventh-ranked Louisville.

Fresh off bullpen appearances in their series win against Michigan, Gabe Bierman and Tommy Sommer were the first two pitchers to face the deadly Cardinals lineup. Bierman allowed two earned runs on four hits in two innings while Sommer surrendered two earned runs in just one inning of work.

Arguably the ACC’s hottest hitter in Alex Binelas hit a three-run homer off Sommer in the third stretching Louisville’s lead to 5-0, leaving Indiana looking like they were in route to a blowout loss.

Alex Franklin was Sommer’s relief in the fourth and unlike both Bierman and Sommer, he wasn’t getting hit but rather he just wasn’t locating pitches. He walked in a run making it 6-0 with Indiana showing just one hit in the top-half of the fourth.

That didn’t last long. Matt Gorski lead things off with a triple and floodgates swung open for the Hoosiers. Matt Lloyd plated Gorski with an RBI-double, Elijah Dunham plated Lloyd with a double of his own and then Indiana just started grinding at-bats on a once seemingly dominant Louisville starter in Jack Perkins.

A throwing error and multiple wild pitches added pressure to the Cardinals staff and the walks followed. Cole Barr, Sam Crail, Wyatt Cross and Matt Gorski would all end up walking in the bottom of the fourth. The Hoosiers managed five runs on just three hits thanks to a midgame meltdown from Louisville making it 6-5 in the Cardinal’s favor still.

Braydon Tucker came in and threw two huge scoreless innings where he managed to give up just two hits. His relief, Conner Manous, didn’t have the same luck. Manous went 1.2 innings and gave up an earned run on two hits and a walk. Louisville held a 7-5 lead for not even a half inning before Indiana fought back.

Yet again the Hoosiers took advantage of sloppy play from Louisville. Gorski lead off the inning by reaching on an infield error to spark some momentum. Elijah Dunham walked and Gorski found himself in a lucky situation. He was caught sleeping at second and when he was picked off. He ran to third where he should’ve been out by a mile, but the third baseman dropped it and Gorski went from an out to being 90 feet away from scoring.

Cole Barr slapped a single into left field and Indiana pulled within one. Sam Crail was next up in a big spot with Elijah Dunham on third. Crail slapped a ball fairly deep down the left field line in foul territory and although it was caught, it was deep enough for Dunham to tag and tie the ball game at 7-7 in the bottom of the seventh.

Grant Sloan would replace Manous, throwing 1.1 scoreless innings recording two strikeouts over both of Louisville’s stars Logan Wyatt and Alex Binelas. Braden Scott was Sloan’s relief and he raised Sloan’s 1.1 scoreless with two scoreless innings of his own as the Hoosiers made it to the twelfth inning, tied at 7-7 with one of the nation’s best in Louisville.

Matt Lloyd took over on the mound in the top-half of the 12thand his throwing error opened the door for some sloppy Hoosier baseball as Tyler Fitzgerald reached base. Fitzgerald stole second and was beat by the baseball, but Justin Walker couldn’t hold on, so Fitzgerald stuck on second with nobody out.

A wild pitch moved him to third with nobody out. Lloyd walked Logan Wyatt and that’s when the costliest mistake of the game came. A chopper to Cade Bunnell looked like it could end the threat at third, but instead of throwing it immediately, Bunnell looked at second for the double play and when he realized he should go home, it was too late, and Louisville went ahead in the top of the twelfth 8-7.

The Hoosiers couldn’t answer in the bottom half and they took their 19th loss of the season moving to 33-19 on the year.

Indiana regressed with sloppy infield play and 23 strikeouts at the dish but showed great fight throughout the game. The Hoosiers weren’t allowing big hits, but they weren’t making the easy plays.         They’ll look to get back on track with a huge series against Rutgers with a Big Ten Title looming in the distance.