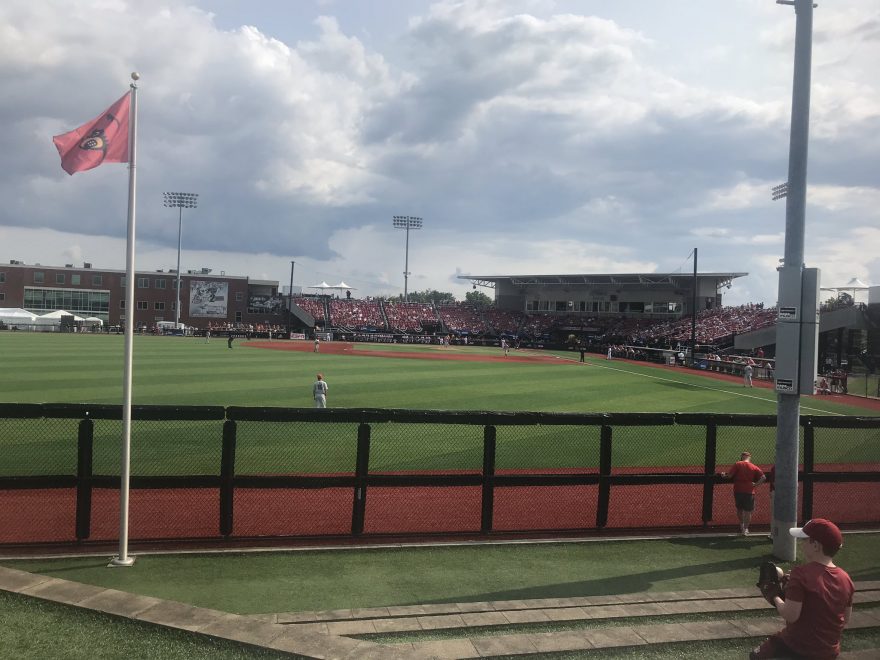 An offensive explosion in the 7th inning was not enough for the Hoosiers to overcome a barrage of hits by Illinois St., as they lose 7-8 in the first game of the Louisville Regional.

As has become all too familiar for Indiana, an opposing Friday starter looked like a Cy Young pitcher. Illinois St.’s Brent Headrick worked six innings of three-hit baseball, giving up just two runs on an Elijah Dunham home run in the 1st inning. During those six innings, the Hoosier bats struck out 14 times, and didn’t manage to have an at-bat with a runner in scoring position until the 6th.

But then the 7th inning happened. After a shutdown inning from Gabe Bierman on the mound, the Hoosiers chipped away at the Redbird lead until Ryan Fineman got plunked with the bases loaded to tie the game. Hoosier bats drew four walks in the inning to pair with three hits, scoring five runs. The next half-inning, however, Illinois St. retook the lead with a single and double, and while the Hoosiers left a runner at 3rd base in the 9th, the Redbirds never really looked back.

On the mound, Indiana ace Pauly Milto struggled, giving up 14 hits and seven runs in 5.1 innings of work. Many of the hits were not particularly hard-hit; the Redbirds simply did a spectacular job of hitting it where the Hoosier defenders were not. Bierman took over for Milto in the 6th, and while he did allow both of his inherited runners to score, he did not let any more Redbirds cross the plate. Connor Manous replaced Bierman on the mound in the 8th and gave up the run while stranding a pair of runners. In the 9th, Tommy Sommer allowed a leadoff double before stranding the runner at 3rd with a pair of strikeouts.

At the same time as the Hoosier pitchers were struggling on the mound, the Indiana bats were getting a whole lot of nothing at the plate. The Hoosiers struck out 18 times while collecting just seven hits. The saving grace for the offense, and the reason the game became an actual game at the end, were the eight walks drawn by Indiana, including one with two outs before the Dunham home run and another two with the bases loaded in the 7th. Dunham had a particularly strong outing, going 3-5 with a homer and three RBI. Matt Lloyd and Scotty Bradley also each reached base three times, with Lloyd working a trio of walks and Bradley walking twice with an infield hit.

The Hoosiers will look to survive and advance on Saturday at 11am ET, as they face the loser of the Louisville-UIC game. In order to make it out of the Louisville Regional, Indiana will have to be damn-near perfect, as another loss sends the team back up the road to Bloomington before heading out for Summer Ball or the Draft. A particular concern for the Hoosiers moving forward is the status of centerfielder Matt Gorski, who injured his wrist in the 6th inning trying to make an amazing diving snag. He was removed from the game at the time, but Coach Mercer indicated after the game that Gorski wanted to stay in the game and that the team hopes he will be good to go on Saturday. The team will likely not announce a starter until they know which team they will be facing, but my guess would be that All-American Andrew Saalfrank gets the nod, as he did not pitch in the Big Ten Tournament; if it’s not Saalfrank, Tanner Gordon will be the starter.