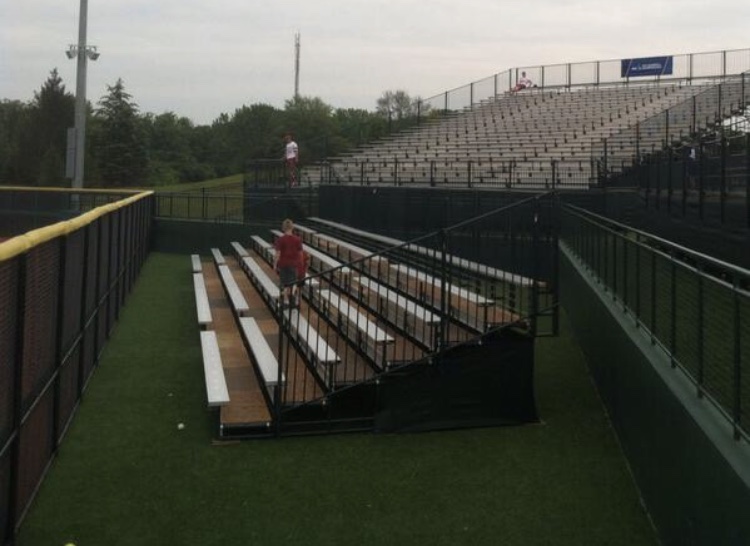 If you caught the Talking Hoosier Baseball podcast on Monday (April 2nd), you heard my talk about offense with runners in scoring. To recap:

Note: Baseball Reference looks at something similar for MLB, but not quite the same. It looks at the percent of chances in this situation that are converted. Which means that they are punishing things like non-bases-loaded walks for not scoring the runner. This would also not include scoring the runner with two outs. For example, say there is a runner on 3rd with one out and the batter strikes out. The next batter (who is now in a 2-out plate appearance) hits a single to score that runner. That plate appearance would not count toward the Baseball Reference statistic. I was trying to simplify by just looking at the percent of those runners who score, not the percent of plate appearances that score those runners.

With the Baseball Reference measure, in 2017 the Colorado Rockies were the top of the MLB at 58% and the Arizona Diamondbacks were the bottom at 45%. These numbers are smaller than the ones that I calculate. Comparing these with the 76% of runners scoring for the Hoosiers is sort of like comparing a granny smith apple with a gala apple; they’re obviously related to each other, but with enough differences that you wouldn’t confuse one for the other. That being said, this does give a little bit of context, and makes me feel pretty good about where the Hoosiers stand.

I also looked at pitching with RISP, but didn’t have time to get into it during the podcast. Most of the pitching staff with meaningful innings have better opponent batting averages with RISP than in general. This is a good thing, and exactly what you want, as they are locking down more in pressure situations. Both Tommy Sommer and BJ Sabol have not yet given up a hit with RISP (and Sabol’s overall opponent batting average is a ridiculously low .069!). I’ve come to expect this consistency from Sabol, and he seems to always deliver, but the see the freshman Sommer do this is really impressive.

Another pair of pitchers, Andrew Saalfrank (.154) and Cam Beauchamp (.182) are holding batters under .200 with RISP, and two more pitchers, Pauly Milto (.207) and Brian Hobbie (.208), are just over that mark. Both Cal Krueger (.240) and Timmy Herrin (.292) are holding batters under .300 with RISP. There are only two pitchers, Jonathan Stiever and Connor Manous (both .308), who have opponent batting averages north of .300, but the former’s numbers are on the way down after a rough first week and the latter’s are inflated by giving up a pair of hits with RISP in his last outing (he has only given up four such hits).

I also took a quick peek at runners left and runners inherited, and how many of each go on to score. These numbers are all still pretty small, as the Hoosiers have been much more likely to change pitchers between innings rather than during an inning.

The way I have been tracking these data has opened up the possibility of a little quirk, one that only shows up if there is more than one pitching change in a single inning. In those cases, it is possible for a relieving pitcher to inherit a runner, allow that runner to advance (but not to score), and then be relieved himself before that runner eventually comes around to score. This causes issues trying to compare the percent of runners scoring between the pitchers that left the runners and the pitchers inheriting the runners (If you want more info on this, just reach out and let me know and I will try to come up with a non-confusing way to explain it.).

I wouldn’t try to read too much into these numbers, especially on the level of individual pitchers, but it can be interesting to see who is being used in different situations. For example, Krueger is the only pitcher to inherit a runner at 3rd base more than once; he’s inherited three of the staff’s eight total, and has only allowed one to score.

On the other end, Stiever has left just three runners upon exiting the game (one at 1st and two at 2nd), and two of them have scored. The only other pitcher with a similar percentage of runners left scoring is Kade Kryzsko, who has left one on 2nd and two on 3rd (both of whom scored). Milto, at the opposite end of the spectrum, has left one runner on each base this season, and none of them have come around to score.

Again, these numbers are ridiculously small because we just haven’t seen too many runners left/inherited. In fact, the Hoosiers are averaging under 1.5 left/inherited runners per game, which may actually be a good sign; perhaps fewer pitchers are getting into insurmountable trouble within innings and are more likely to be able to escape it rather than relying on a new pitcher to do so.