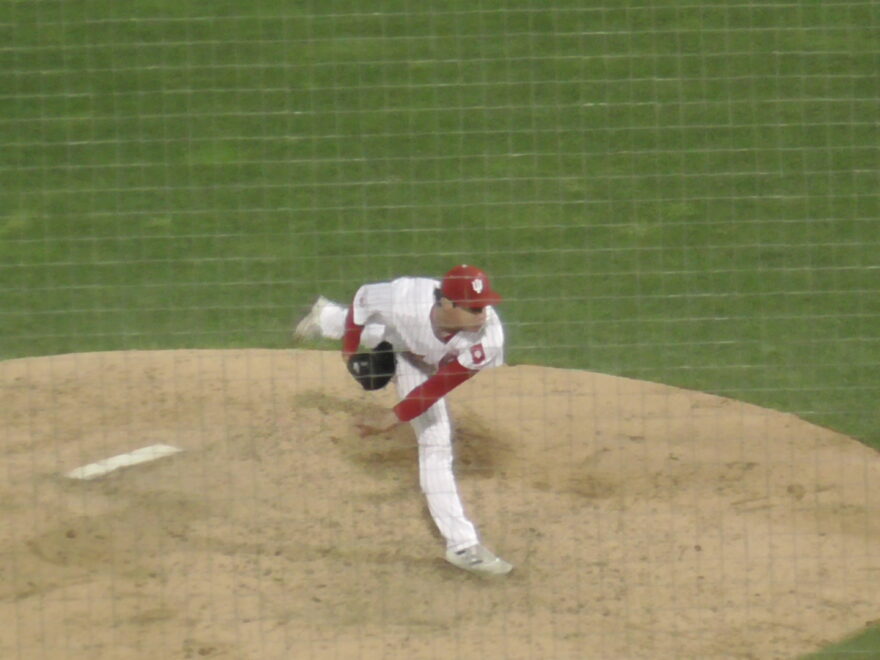 Every spot in the order hit, Bothwell was electric in a win to keep the season alive

It was a game that had the feeling of a real do-or-die situation for Indiana, just trying to stay in the hunt for one of the final spots in the B1G Tournament after letting a lead slip away on Friday. Bobby Whalen got the game started with a single and then stole second with two outs. A Carter Mathison walk setup two on and two out for Matthew Ellis who hit an opposite field, two RBI-double to get Indiana the early two run lead.

Bradley Brehmer got off to a concerning start with a hit batsmen in the bottom of the first. A one out single put runners on the corners with only one out. An RBI-groundout and an RBI-single tied the game. Brehmer was already using his full assortment of pitches. The bottom of the fourth would be the killer inning for Brehmer. With the bases loaded and one out Brehmer got a key strikeout. Of course, both teams excelled at two-out hitting on the day and indeed a bases clearing double would give Michigan a 5-2 lead.

Indiana had a huge opportunity to immediately respond with a bases loaded situation in the top of the fifth. With two outs Josh Pyne got things started with a double. Doanes managed an RBI infield single to drive in Pyne, but unlike Michigan, Indiana could not convert the bases-loaded opportunity into a crooked number.

Brehmer would manage to come back out and hold Michigan scoreless in the fifth. Over a hundred pitches, Brehmer handed the ball over to Ty Bothwell for the sixth inning. Ty Bothwell’s improvement continued. Throwing near 93 MPH with his fastball he cut right through the Michigan order, going 2.2 innings, with 5 strikeouts and only giving up two hits and no free passes.

Indiana bats final strung something together in the top of the seventh inning. Three straight singles loaded the bases for Matthew Ellis who wore a pitch to get an RBI. Tyler Doanes grounded into a double play after a Michigan pitching change, but the tying run came home. Brock Tibbitts then drove in Mathison to give Indiana the lead.

In the bottom of the eighth, with two outs, no one on and a one-run lead, Mercer pulled Ty Bothwell, in favor of Reese Sharp who has clearly taken over the role of the Indiana closer. Sharp got the Hoosiers back into the dugout quickly, and got some cushion for his one-run lead. Pyne and Mathison got things going with a pair of doubles and Ellis drove in a run with an RBI single. Tibbitts added another run with an RBI-single and Evan Goforth drove in the Hoosier’s ninth run with an RBI-double, his third hit of the game in which he came in off of the bench.

Sharp had a 4-run lead to protect in order to earn the save. He go one quick out, but a single and a Goforth error at shortstop gave the Michigan offense some hope. Sharp battled and ended the game with the Hoosiers victorious 9-5. Bothwell earned the victory.

In total, every slot in the Hoosier batter order got at least one hit. Indiana outhit Michigan 16-11. In addition to Goforth, Mathison and Pyne each got three hits as well. Tibbitts had the other multi-hit day. Those four freshman Hoosier bats matched Michigan’s whole lineup with 11 hits.

The win brings the Hoosiers up to 7-10 in the B1G, 21-25 overall. The 8-line in the B1G is still muddled as of the time of this writing as weather has delayed many games this weekend in the league. Some series will not conclude until Monday. Indiana and Michigan are on track for a critical rubber match in Ann Arbor Sunday at 1pm. Indiana has not announced a starting pitcher. Expectations are that Braydon Tucker and Jack Walker may see significant innings. Sharp might be available for one inning. Luke Hayden pitched only two batters on Friday and looked good, so he might be available as well.