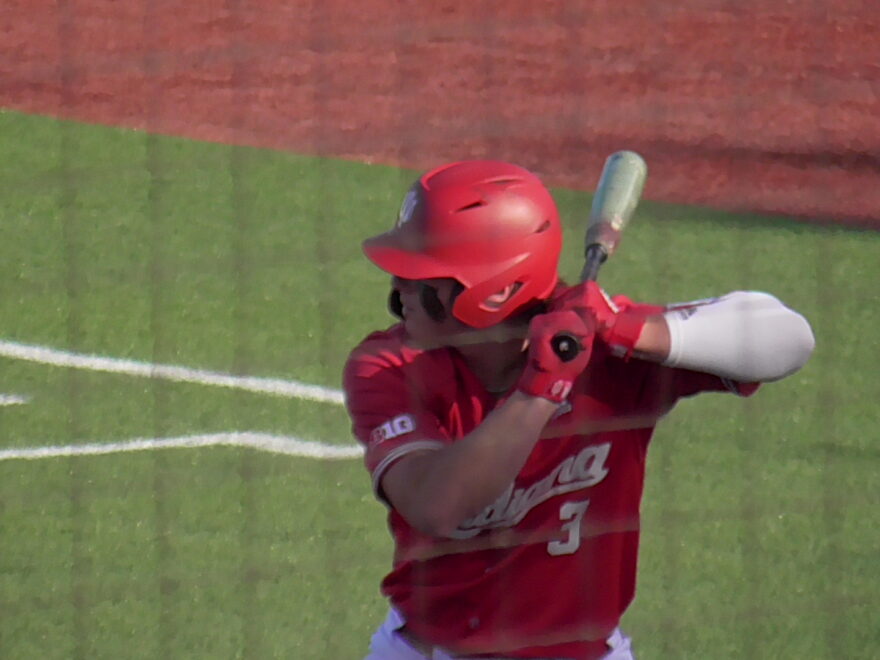 Conventional wisdom has the Hoosiers needing to go 12-12 in B1G play to make the B1G Tournament. At 6-9 heading into the Michigan series that only allows for 3 more losses. Every game matters. Indiana took a 4-3 lead into the seventh inning stretch of Friday night’s game but could not secure the final nine outs. Michigan hit middle reliever freshman Grant Holderfield hard and won the game 8-4. Now at 6-10 in the B1G, Indiana needs to demonstrate the short term memory they have shown so many times and find a way to win Saturday and Sunday to take the series.

It was another quality start for Indiana ace Jack Perkins. He went 6 full innings, giving up 3 runs (all earned). Perkins has become the model of consistency for an Indiana staff that has largely been anything but consistent. Perkins was throwing 95 MPH fastballs and mixing his off-speed assortment well, keeping a solid Michigan offense off-balance.

Perkins’ Michigan counterpart, lefty Connor O’Halloran had an interesting day. He gave up 4 runs (all earned) in 5.1 innings. The crafty lefty had all of his problems with the three left-handed Hoosiers in the lineup. Hunter Jessee lead the attack with three hits (all smoked) one rocket of a home run and an RBI double. Matthew Ellis managed an opposite field solo home run, and Carter Mathison tied Alex Dickerson’s freshman record of 14 home runs with a no doubter of his own. The three Hoosiers left hitless on the day were all right-handed.

At the seventh inning stretch, the Hoosiers needed to hold the Wolverines for nine more outs to secure the win. The strategy seems to be to get the ball to closer Reese Sharp in the ninth with a lead. The choice was made to use freshman lefty Grant Holderfield to bridge those first six outs to get to Sharp. It did not go well. Holderfield’s low-slot delivery is very tough to adjust to especially early in his appearance. However when he struggles to locate pitches, good hitting teams like Michigan adjust pretty quick. Michigan was aided by a one-out infield single and poor attempt to catch stealing. That extended the inning long enough to allow Michigan catcher Jimmy Obertop to blast a two-run home run to give Michigan what would be a permanent lead.

Michigan piled on against Holderfield in the eighth. Freshman RHP Luke Hayden had to come in stop the bleeding (which he did with two quick outs), but the IU offense suddenly needed to score 4 runs in the ninth, when Michigan had RHP Noah Rennard already pounding the strike zone hard. An error by Rennard and a Josh Pyne single made the inning intersting, but in the end the Hoosiers did not plate a single run and dropped the series opener.

With losing on the day of Perkins’ start and Holderfield not looking like a realistic option this weekend, the Hoosiers have a huge task ahead of the them to win the series. The good news for Indiana is that Michigan pitching after O’Halloran has been hit pretty hard all year. The Hoosiers will need to run up the score, and come up with enough good pitching from the likes of Bradley Brehmer, Reese Sharp, Ty Bothwell, and Braydon Tucker to keep the games within reach. First pitch for game 2 is Saturday at 2pm.