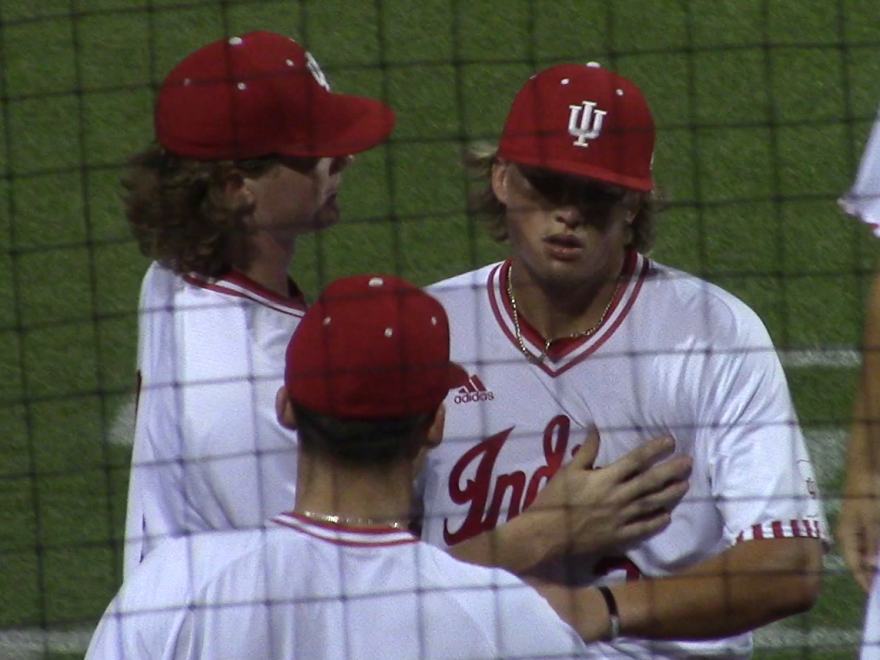 The Indiana Hoosier Baseball team faced off against one of the midwest’s premiere junior college programs on Friday night. In all 29 Hoosier players saw action including 13 pitchers who each pitched one inning.

The scoreboard broke it up into two games. The first game went 7-innings. John A Logan scored in the first frame with a solo home run off of Indiana starter John Modugno. The Hoosiers responded in their half of the inning when Morgan Colopy drew a full count walk, was moved to second when Matthew Ellis was hit by a pitch and scored when Bobby Whalen skied a fly ball into short center that Logan fielders lost in the bright sun.

Jack Walker gave up run in third on a wild pitch after allowing a 4-pitch walk and a stolen base. He battled back to end the frame with a strikeout.

Again the Hoosiers answered. The top of the order came through with second baseman Tyler Doanes (grad transfer from West Virginia) lead off with a full count walk. Indiana shortstop Phillip Glasser (transfer from Youngstown State) moved Doanes to third with a single. Morgan Colopy drove in Doanes with a groundout to third base. DH (and later catcher) Matthew Ellis drove in Glasser with a well hit single to give the Hoosiers a one run lead.

Braydon Tucker faced some trouble in the fourth inning. He made a great defensive grab on a short ground ball, but commited an error on the throw to first. He also gave up a single, but got out of the jam with three strikeouts.

True Freshman Grant Holderfield had the first 1-2-3 inning for Hoosier pitchers with a groundout, a flyout, and a strikeout of the top of the Logan order. Holderfield has a huge hand from Doanes who made a glove only grab and toss from the right side of the infield to get that first out.

Logan tied the game in the sixth inning with an RBI single off of Reese Sharp. The Hoosiers answered for the third time when Ethan Vecrumba got on with a hit and scored on an Evan Goforth sacrifice fly to get the lead back.

The top of the seventh was an impressive 1-2-3 inning from Wright State transfer Bradley Brehmer who sat down Logan on groundout and two strikeouts. Since it was an exhibition the Hoosiers batted in the bottom of the seventh with game already won. Hits from Glasser, Ellis, and Whalen padded the score to 6-3.

Nathan Stahl opened game two with a 1-2-3 inning and two strikeouts. Indiana jumped out to a 3-0 lead thanks to a walk by Doanes, triple by Glasser, three walks and RBI single from true Freshman catcher Brock Tibbits.

Ty Bothwell got into full counts on his first two batters and walked both prompting the only mound visit of the day from new Indiana pitching coach Dustin Glant. Bothwell got another lengthy break when a Logan player was injured on a foul ball. Bothwell regrouped and struck out three straight batters.

Doanes continued his impressive day with a single to lead off the second inning, scoring when Glasser reach with a hard hit ball that was misplayed for an error by the Logan right fielder.

True freshman local star Luke Hayden made his much anticipated debut in a Hoosier uniform. After giving up a walk with two outs, Hayden ending his frame with a strikeout showing off his electric mix of pitches that clearly had Logan hitters off-balance.

A double and a sacrifice fly off of Brian Gaffney in the sixth got Logan on the scoreboard in game two. Two more runs in the top of sixth off from a walk and two hits given up by Blayne Deaton got John A Logan within a run before Deaton set the last two batters down including a strikeout to seal the Hoosier’s 4-3 victory in the six inning affair.

Indiana hit .265 on the day, earning 11 free passes and struck out 13 times. Hoosiers saw a total of 14 full counts in 13 innings. After the game head coach Jeff Mercer said, “A bunch of full counts, those guys were really competitive. I thought we did really good job once we settled in after the first inning or two.”

Glasser was the star offensively going 3 for 5 with 1.8 OPS. Doanes had a .500 on base percentage and scored three runs at the lead-off spot. Matthew Ellis in the clean-up spot drove in two runs. Kip Fougerousse had a great day as well going 2 for 4 with a double and a walk for a 1.6 OPS.

Mercer summed up the hitting, “We really competed, getting guys in the strike zone. We didn’t chase. As far as where we are offensively, at this point, I though we did a good job.”

Hoosier pitching at first glance seemed to lose no momentum after seeing the entire weekend rotation and closer go in the MLB Draft and change in pitching coaches. 13 different Indiana pitchers saw a full inning and none let John A Logan hitters put together a big inning.

Most notably statistically, Logan hitters were held to a 0.156 batting average. There were 18 strikeouts in 13 innings compared to 8 walks.

The Hoosiers will be back to fall workouts for the next few weeks. Then on Friday, October 15th, the Hoosiers will travel to Cincinnati, Ohio, for a Division I fall exhibition with the University of Cincinnati Bearcats. No time or length of play has been announced as of yet. iubase.com plans to have similar coverage of that matchup as well.