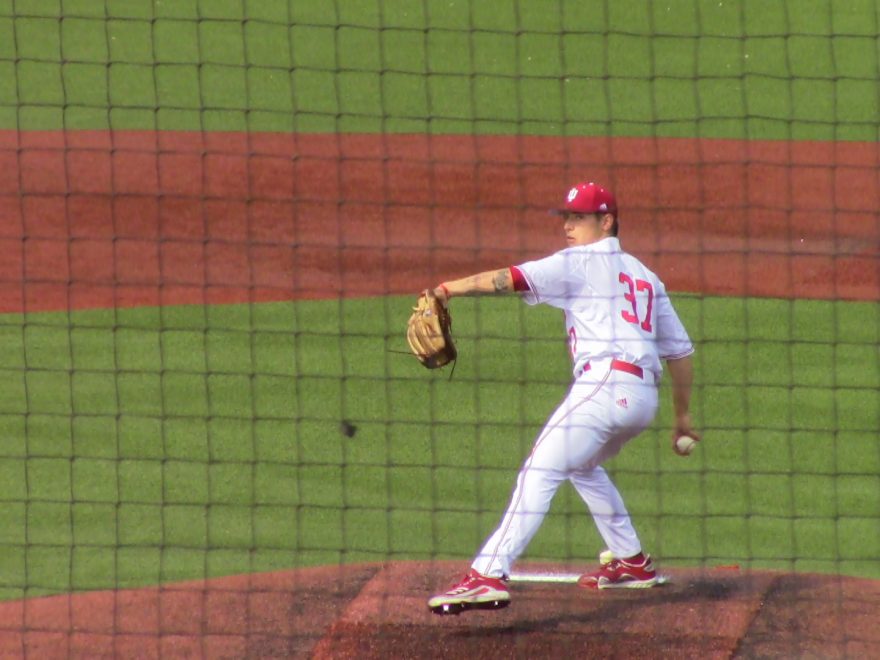 Two things happened in the Big Ten Conference (B1G) of note yesterday outside of Indiana’s fifth straight loss. Nebraska clinched the B1G Title in a 9-0 win over Ohio State in the early afternoon at Bart Kaufman Field. Then the Minnesota Golden Gophers ended their 15 game losing streak with a victory over Purdue.

After giving up 20 runs in two games to Nebraska, Ohio State needed a huge start from Garrett Burhenn to try to save some bullpen arms for the final game of the Bloomington pod on Monday night. They got just that. Not only did Burhenn pitch a complete game, he never threw ball 3 to a Hoosier batter. In three Indiana games in the pod so far, the Hoosiers have only walked two times. That’s a shocking statistic for a team that usually relies on free passes to get men on base to score runs.

Burhenn’s Hoosier counterpart Gabe Bierman also mostly stayed in the zone. Bierman only walked two, and one of those was intentional. However, one of those walks along with a barely hit batsmen turned into two runs. Add Conner Pohl’s home run and Bierman took the loss for the Hoosiers. Bierman pitched five innings, giving up five hits and striking out six Buckeyes. Hoosier pitchers in total struck out 11. They have totaled double digit strikeouts in each of the last four games despite losing each one.

It was the batters for Indiana that did not come through. Jeremy Houston’s double in the first inning was Indiana’s only extra base hit and produced the Hoosier’s only run of the game. Drew Ashley’s hit scored Houston. Ashley got to third base with one out, but was unable to score after two strikeouts. In the fourth inning, Cole Barr got to second base with one out, but was left after two more strikeouts. In the ninth runners on the corners and two outs also ended in a strikeout.

Indiana’s bullpen was once again just stellar. Nathan Stahl and Reese Sharp gave up no runs, hits, or walks in four innings of work.

Sharp tears through the top of the Buckeye order. To the bottom of the ninth.

2 to tie
3 to win pic.twitter.com/Qwlg0h0Lzb

With the loss Indiana remains in 4th  place in the Big Ten standings    now a game and half behind Michigan and no 25 Maryland.  The Hoosiers have an opportunity to cut that to one game Monday night  at Bart Kaufman Field with the final game of the Bloomington pod against Ohio State. That would set up the possibility of a series win in College Park next week over a ranked Maryland team to tie in the B1G standings to make a case for an at-large bid.