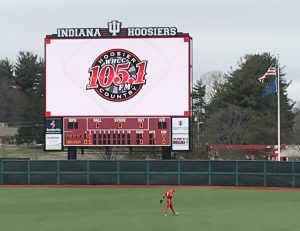 (Via IUHoosiers.com series preview)
The rest of the IU Series Preview is here

(Via IUHoosiers.com)
There were a lot of firsts for Hoosier Baseball players during last season’s sweep at Northwestern last March.
Brian Hobbie – first career complete game
Logan Sowers – first career 5 RBI game
Luke Miller – first career 4 Hit game
Matt Lloyd – first career 3 HR game. Lloyd had 4 total in the Friday double header sweep. His performance on the week earned him B1G and National Player of the week Honors.
By May though, The Wildcats made a huge run in the B1G Ten Tournament beating the 2, 3, and 4 seed to make the Tournament Final. They did lose to Iowa in the title game finishing just 1 Win short of the NCAA Tournament.
The Daily Northwestern points out that the last time NU beat IU their Friday night starter was in 8th grade. You can read about that here

Northwestern is coming of a 2-0 win at Notre Dame on Wednesday night. Before that they were swept by Michigan at home including being shutout twice and out scored 16-3 total.
B1G Standings