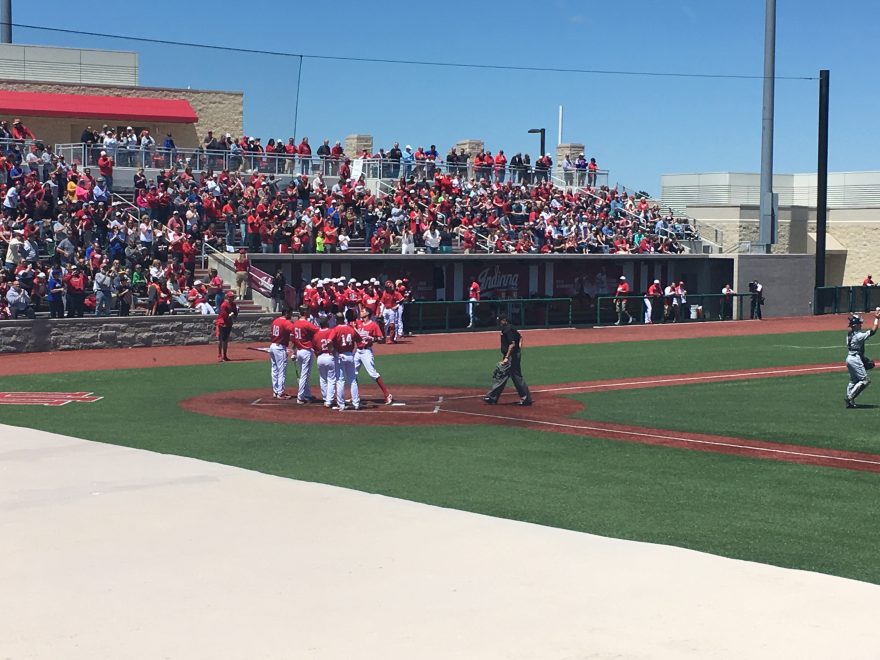 The major media outlets have looked favorably on the improvements to Indiana’s real-time RPI and projected that Indiana will get a top-16 national seed and host a regional. This did come with the caveat that the Hoosiers would win the regular season B1G title. While I have no question that Indiana is the elite team of the B1G, the fact of unbalanced scheduling (only 8 series among a league with 13 teams) could easily lead to the best team not winning the conference title.
We are now 2 weeks into B1G play, but given that a lot of the bye weeks are front-loaded and one game (Indiana-Iowa rubber match) has been cancelled, it is difficult to glean anything from the current B1G standings.
On top of that, you have a ton of decent teams in the league this year, a few very poor performers, and only one real stand-out in Indiana. I developed a model that takes three of the most well known methods of ranking all of Division I baseball (Nolan’s ELO, Boyd’s ISR, and the NCAA’s RPI) to get a national rank from each team. I then assign each team the 2017 RPI of the corresponding team of the same rank. I put that through some calculations, applying the 2018 B1G schedule to get a prediction of the final results in the conference.
I still have not directly factored in the actual conference results, but what came out was not inconsistent with what has happened so far. I have run this exercise each of the last 3 weeks and the changes in the rankings have produced different vastly differing results each week. Below is where the prediction model sits now. 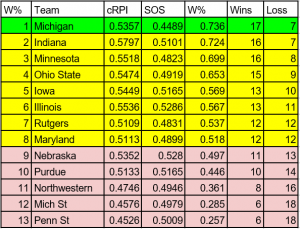 Of all of the teams being discussed, I had not seriously considered Michigan, but here they are now as the mathematical favorite. Michigan in this model is benefiting from what is now an extremely easy B1G schedule that includes all three of the league’s worst performing teams. Minnesota benefits from an easy schedule as well to help get a third place finish.
This prediction shows Indiana finishing half a game behind Michigan for the B1G title, despite Indiana being a much better team overall. Indiana has a somewhat difficult B1G schedule per this model. Now, I have no history with this model, and it is very possible that there is a significant flaw in it.
Prior to running this model I made a conservative series-by-series prediction for the Hoosiers and interestingly enough came up with the exact same result (16-7). I will reveal the aggregation of the prediction now:
So to win the B1G, I believe that the Hoosiers only need to slightly outperform this model by one game. This means either avoiding that 1 series loss I have above or turning one of those four 2-1 series wins into a sweep. I think there is no question that the Hoosiers have the ability to do this, but we all know that baseball can be full of surprises.
CJ