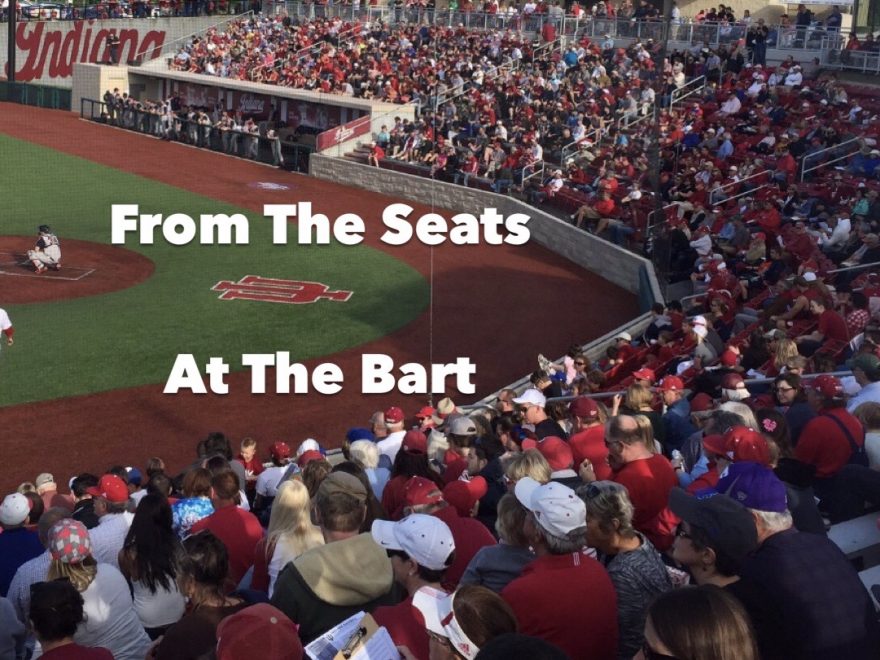 Our next entry for From The Seats At The Bart comes in from Cassady Palmer. If you’d like to add an fan story, experience or just talk about your Hoosier Baseball fandom just contact the site or the twitter account @iubase17. Thanks

So, how did I become an IU baseball fan? Like a lot of people, it really started with that magical College World Series run of 2013. Yeah, I had been to some games at old Sembower (and watched some from my dorm room on the top floor of Briscoe), but I went to a lot of sports events on campus without becoming a diehard. Granted, a lot of times I was working the games as an usher, which led me to Bart Kaufman Field in the Spring of 2013, its first year. I had made my way onto the Olympic sports staff (the non-football/basketball sports), and so was a regular in the outfield area that season. I fell in love with the team and the excitement buzzing around the Bart.

Fast forward to the Regional, the first one Indiana had ever hosted. I was working the area between the press box and 3rdbase suite for that first game against Valpo. You know the one. Bottom of the 9th, one out, trailing 1-4. Michael Basil hits an infield single. Dustin DeMuth brings him home with a double. 2-4. Casey Smith brings him home with a double of his own. 3-4. Enter Chris Sujka as a pinch runner with Chad Clark at the plate. You couldn’t script it any better. You’ve got the guy who hadn’t hit a home run all season. The one who, just a half inning earlier, had committed the error which allowed Valpo to tack on a pair of runs. And now facing a pitcher who had given up just one run in 25 innings all season.

Again, you know what happened. For a brief moment, time froze at Bart Kaufman Field, everyone holding their breath, all eyes tracking the ball out to the bullpen. And then chaos. 5-4, Hoosiers win, game over. The stuff of legends.

Now, it could end there, with that magical game turning me into a life-long fan. But it doesn’t end there. Fast forward another couple of years to my first year of grad school in 2015. I’ve been following IU baseball religiously, coming to every home game and even a few away games. And I’m now in a data analytics class. I decide that I want to work on my own statistical project on my own time, just to help me learn the concepts and software better. And what better data to use than IU baseball stats. But hold on a minute, I want more advanced stats than I can find online. So I start bringing scorecards out to the games, gathering my data. I start to analyze it, and even write about it a bit.

And in this process, I meet the most amazing people. I get to know the team, their families, the long-time fans. People who don’t even question why a college-aged woman is out at the ballpark with a scorecard. People who understand my passion and even encourage it. People whose crazy matches my own. And it’s those connections that help keep me going now, keep pushing me to get better and improve my stats each year, even now that I live 335 miles away.

There are all kinds of stories I can tell from my time following IU baseball. From sitting through all kinds of weather, to road trips to catch away games, to teaching my new coworkers in Missouri about Hoosier baseball, it’s the family surrounding this program that stands out the most. It doesn’t matter whether you live near or far, whether you’re brand new or have been following for years. Everyone is welcomed and embraced. Even the crazy girl with scorecards and flip flops in Indiana in March who has way too many numbers running through her head all the time.