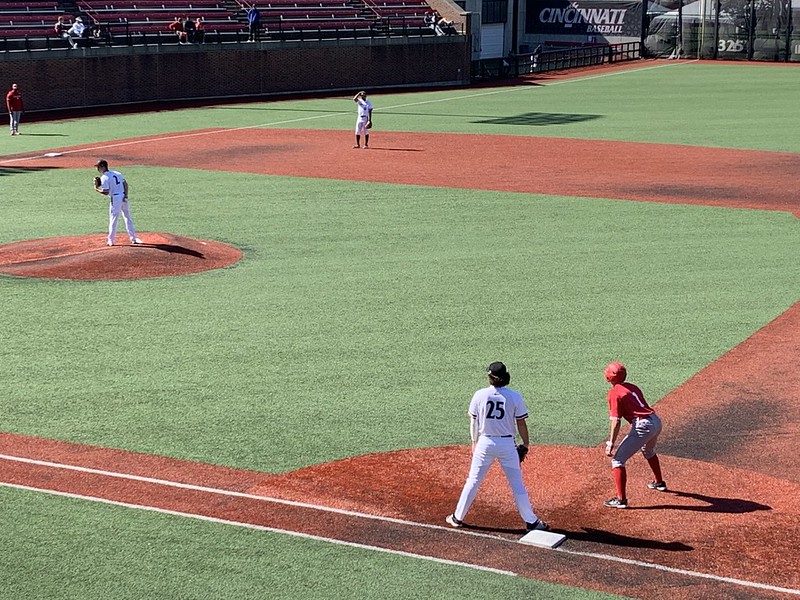 The highlights of the schedule happen early and have been known for a while now. Indiana will open the season with a series at Clemson. While the ACC program was not an NCAA team last year, they are poised for a bounce back season, and should be a good barometer out of the gate for the Hoosiers.

The next week Indiana will be on the big stage of the annual Round Rock Classic in Round Rock, Texas. The three-game slate starts Friday against what may be the best program in the country in Arkansas. The weekend is concluded with a Sunday game against Pac-12 powerhouse Stanford, a 2021 College World Series team.

The Big Ten (B1G) schedule is back to the typical slate of eight three-game weekend series. With an odd number of baseball programs (Wisconsin does not field a team) and no three-team pods like 2021, there is a bye-week for each team. Indiana has its bye week on the league opening week and will host Evansville in a non-conference series.

The highlights of the B1G schedule include hosting defending B1G Champ Nebraska and road trips to Purdue, Iowa, and third trip to Ann Arbor in three B1G seasons to face Michigan. Paired with a road series to Piscataway and hosting Minnesota, Indiana’s B1G schedule looks balanced upon first glance. I plan to look at every team’s schedule in the near future and determine who has any easy or tough road to a B1G title.

The neutral sites include the three games at Round Rock and a welcome return to Victory Field in Indianapolis to face off against the Butler Bulldogs.

Every season I make an RPI analysis of the schedule to get an idea of how many wins the Hoosiers will need to get an at-large bid on Selection Monday in May. I usually go by the prior season as a guide. This tends to be accurate – not because every team is identical year to year – but because the slate is diverse enough that if one team on the schedule has a better year, usually that gets offset by another team that has a worse year.

The tricky part of this process is that 2021 does not model straight to 2022. All B1G teams played a B1G only slate in 2021. IU has five games against ACC and Big East teams (Butler, Clemson, and Louisville) who also played a non-typical balance of conference/non-conference in 2021. To get a comparable record, I used a method that mixed elements of 2021 (conference) 2020 (to model early season), and even a bit of 2019 (to model later non-con).

This is the result of the adjustments compared to the 2021 record for those teams: 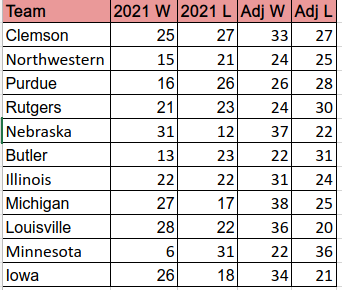 After running all these numbers, the result that pops out is almost identical to the last three seasons I have run this. Indiana needs about 36 wins to get into the NCAA at-large conversation via the RPI metric. This schedule does not have the swings prior schedules did. There is only one game against a 40-win team: Arkansas. There is only one game against an adjusted team with less than 20 wins (midweek versus Purdue Fort Wayne). Yes – Minnesota only won 6 games last year and it is hard to imagine that team winning 20 even with a typical schedule. This could be a flaw in my methodology, but it is also unlikely that a program like Minnesota will be that bad two years in a row. Only one sub 20 win team isn’t too bad.

The higher mix of true road games also balances a bit of the lack of top end competition. The biggest hope overall is that the anecdotal evidence of stronger B1G pitching in 2021 will equate to the league improving its non-con winning percentage in 2022 which would help the RPI of every team in the league.

If Indiana does need 36 wins, how do the Hoosiers get there? I have mapped that out. I have the Hoosiers gaining 2-1 series wins against Clemson, Troy, Evansville, Northwestern, Purdue, Rutgers, and Illinois. Add to that sweeps of Missouri State and Minnesota and a 3-1 series win over Xavier. Taking a win in 1-2 series losses to Iowa, Michigan, Nebraska, and at Round Rock. In mid-weeks I have the Hoosiers with 2-0 sweeps of Miami (OH) and Illinois State, 1-1 splits with Cincinnati and Indiana State, typical split of Louisville and Kentucky, losing at Evansville, defeating Purdue Fort Wayne, and defeating Butler at Victory Field.

This exact resume would be troubling for a lack of marquee series wins. In a real season with ups and downs, there would be more bad losses balanced by better wins that would wash the RPI but give the Hoosiers the resume boost they were hoping for. It is too hard to pick those out, just know that they are going to be there. After that the Hoosiers would still have the B1G Tournament in Omaha to put the finishing touches on an NCAA caliber resume.

I really like the opening two weekends. Clemson and IU are about in the same place heading into the season and it should make for a good opening barometer. If the Hoosiers pass that test then a national level test awaits in Arkansas and Stanford at Round Rock.

As an RPI guy, I love true road games and the numbers boost it gives. I even love scheduling at Miami (OH) for a midweek in February. Yes – there is a very good chance that game gets cancelled, but there also a chance it will be warm enough to play and it is a way to get closer to 56 games without too many arm-punishing two-game midweeks.

What I do not like is that the state of Indiana’s two winning-est teams in 2021 are nowhere to be found on this schedule. Indiana plays neither defending ACC champion Notre Dame nor a Ball State team that went 38-18. I love that the Hoosiers are getting back into Victory Field, but 13-23 Butler had to be the fallback position, not the first option. And of all of the in-state teams to schedule in a midweek, 11-35 Purdue Fort Wayne would be at the very bottom of my list.

As a local baseball fan, I dislike only 25 games scheduled at the Bart. Yes, this goes against my RPI brain, but home games are so important after almost three years since Hoosier fans have been able to watch spring baseball in person. At least there is a 3 game series in West Lafayette. Say what you want about Purdue, but they do have a nice ballpark in Alexander Field and it would be great if a lot of Hoosier fans show up for that series.