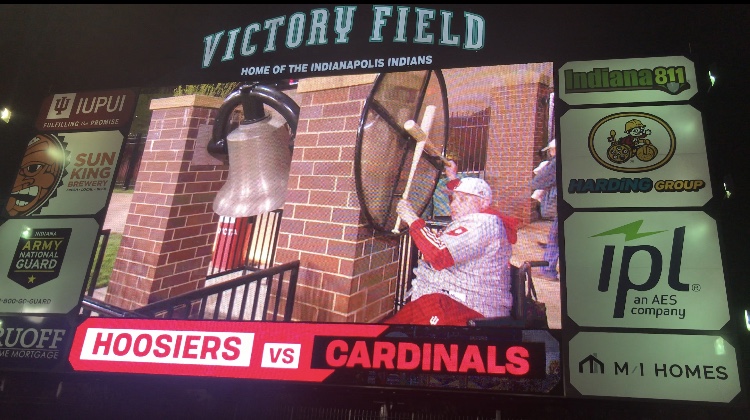 The Hoosiers completed their sweep over the state of Indiana with a 9-3 win over Ball State at Victory Field. They have now beat Purdue, Indiana State, Evansville, Ball State, and Butler in route to their now 28-13 overall record.

After a 14-3 thrashing in the first game, Ball State went with a different approach at Victory Field on Tuesday. The Cardinals started their typical Friday starter, Drey Jameson, who took the bats out of the first three Hoosiers’ hands with three straightstrikeouts.

In the other dugout, it was Gabe Bierman who got the start for Indiana. Bierman had a rough start after two singles and a double gave Ball State a quick 1-0 lead, but he turned in a solid performance. Ryan Fineman returned to the lineup and made an immediate impact with perfect bunt coverage with two outs to throw the runner out and keep it at one run for the Cardinals in the first.

Ball State kept it going in the second, but it wasn’t Bierman’s struggles that led to a run rather a throwing error by Cole Barr that allowed the Cardinals’ leadoff hitter to reach second on a sure out. He would come in to score and it was quickly 2-0 and the Hoosiers couldn’t find the bats.

In the first three innings they totaled just one hit while striking out five times. Meanwhile the Cardinals just kept rolling with an RBI triple that made it 3-0 at the end of three.

Indiana hasn’t played from behind much this year but scoring runs sure hasn’t been a problem for this club. A fourth inning double by Matt Gorski followed by an RBI single from Scotty Bradley cut into Ball State’s lead making it 3-1.

Once the Hoosiers tasted one, everything started clicking again. Grant Richardson led off the fifth with a double and Elijah Dunham added to Indiana’s count of 71 home runs with the 72ndto tie the game at 3-3.

Gabe Bierman would post his second consecutive scoreless frame before Coach Mercer brought in Conner Manous who was lights out. Manous threw three scoreless innings of one-hit baseball while striking out five. It was the exact performance Indiana needed in a tight 4-3 ballgame.

The score held at 4-3 into the ninth and that’s when Mercer’s crew tacked on the insurance. A Cole Barr single started the rally and Ball State’s pitching took over from there. A hit batter, a walk and a wild pitch brought Barr home to make it 5-3. Then it was back-to-back RBI singles from Drew Ashley and Matt Gorski that made it 7-3. Matt Lloyd had already warmed up to close it out in the ninth, but he figured he would just add some insurance himself with a two-RBI double to make it 9-3.

Lloyd still came out to pitch in the ninth and struck out the first batter, but in the middle of the second batter he appeared to injure his back and was pulled for Braden Scott who closed it out.

Gabe     Bierman battled through sickness to pitch five innings allowing two earned runs, five hits and totaling six strikeouts to earn the win and the Hoosiers will carry this momentum into the weekend series against Minnesota.