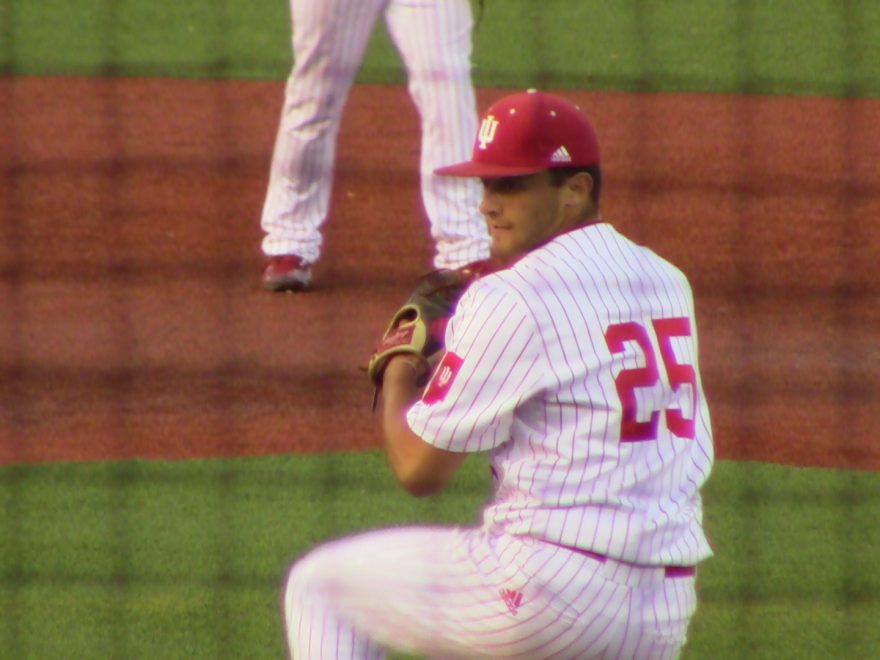 Nebraska had extended their Big Ten lead over Maryland and Michigan to 2.5 games and 3 games over Indiana with a come from behind win Saturday afternoon. After going down 9-2 to Ohio State, the Huskers came roaring back once Seth Lonsway was no long on the bump. Nebraska had to deal with a lot of key bullpen innings. The question was could Indiana put that advantage to work in the nightcap.

McCade Brown got into a 3-0 hole to the first batter, but threw three straight strikes to set him down. Jaxon Hallmark hit a single and Spencer Schwellenbach followed that up with a double into the right center gap to get the Huskers on the scoreboard first. Brown gave up another run in the second inning on a solo shot by Brice Matthews.

Huge STRIKEOUT for Brown. That curveball is wicked! #iubase pic.twitter.com/k9ZCUhLghP

Brown settled in and made great use of his high spin rate curveball to strikeout eight Huskers, giving up just the two runs in five innings of work.

Brown’s counterpart, Nebraska righty Chance Hroch, had a career game against the Hoosiers. Hroch, knowing his team’s bullpen was depleted by the earlier game, pounded the strike zone. The strategy worked very well. Mercer stated after the game that, “Once he establishes that he can control the strike zone, we have to be more aggressive.” The Hoosiers went from looking at good pitches early in the game, to swinging at a more competitive pitches early in counts in the middle innings. This was a recipe for the disaster that happened: Hroch dealing for nine innings and giving the Hoosiers no crack at that depleted Husker bullpen.

The Hoosiers managed only three hits on the day. Grant Richardson had two including the Hoosier’s only run, a solo shot with two outs in the ninth inning. The other hit was by Freshman Tank Espalin. Richardson and Espalin were the only left handed hitters in the lineup. The right handed Indiana hitters were a combined 0-21 on the day.

Nebraska scored once more in the sixth off of an RBI triple. Mojo Hagge avoided a tag at home to score the Huskers’ third run of the game. The Hoosier defense was outstanding with Collin Hopkins throwing out two runners and doubling off a runner at third after catching a bunt pop up. Jeremy Houston had a stellar diving play and throw out at shortstop late as well.

Connor Manous pitched the last two inning and was stellar. He rewally had the 12-6 curveball working, striking out four. Indiana pitchers recorded 15 strikeouts on the day.

Connor Manous with four strikeouts in two innings. No hits and only one walk. #iubase pic.twitter.com/KtZZzGTeRJ

With the loss Indiana remains in fourth place in the Big Ten standings and are eliminated from the Big Ten title race. The Hoosiers are facing off against Ohio State Sunday at 5pm at Bart Kaufman Field. Coverage will be on the Big Ten Network.