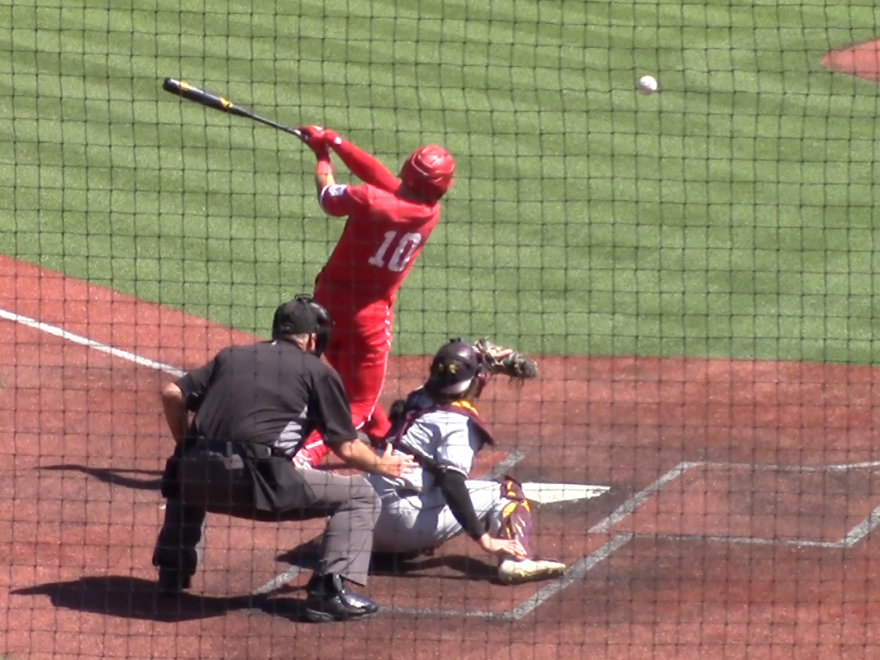 Morgan Colopy was the offense for the Hoosiers. It wasn’t enough to counter the Michigan bats and poor defense.

Gabe Bierman fought through a couple of jams giving up 4 runs in 7.1 innings of work while striking out six Wolverines.The worst trouble was the seconding inning with two singles, a sacrifice fly and a double that scored two runs. Michigan hitters in the middle of the order did most of the damage putting good swings on Bierman’s pitches.

Bierman settled in nicely and was effective until giving up a ground ball hit on his 110th pitch. Bierman was mostly working the zone with his wide arsenal of pitches. When Bierman did get a bit wild, he got under control and get the walked runners from scoring.

Michigan left-handed starter Jacob Denner had all of his pitches working. Coming off three losing efforts, Denner had a mix of breaking balls and an effective low-90s fastball that Indiana hitters were unable to do much with. Indiana’s only run came off of an opposite field solo home by Morgan Colopy. Colopy also had a double for Indiana’s only multi-hit player of the day.

After Grant Macciocchi came in to relieve Bierman, a series of poorly defended plays (though only one official error) lead to three runs scoring, giving the Wolverines a 5-run cushion into the final frame. After a tough series from the Michigan bullpen, Will Proctor finally had the answers and shut the door on the Hoosiers earning the save in Michigan’s 6-1 win.

Nebraska was idle today as Northwestern did not have enough pitching for the full series as some players are still isolating due to COVID-19. Nebraka’s Big ten lead extends to one full game. No. 21 Indiana is still in second place in the Big Ten standings   with Michigan, zero games ahead with a slight percentage lead.

Next up for #21 Indiana is the only midweek game of the season: a make-up game vs Illinois. This will be at Bart Kaufman Field on Tuesday at 3pm. Given his lack of use this weekend, we might assume that left handed pitcher Ty Bothwell with likely start for Indiana.