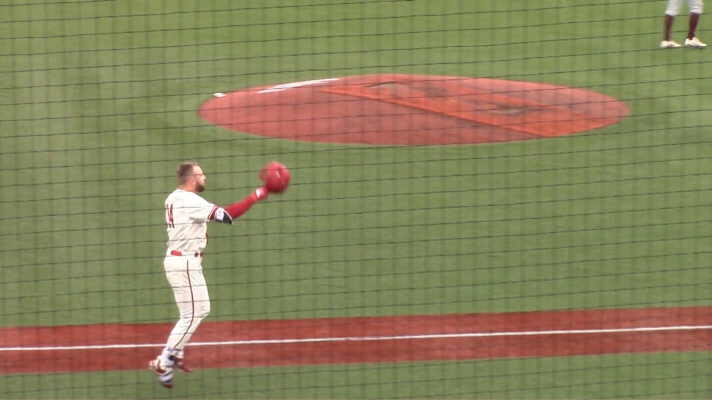 Indiana steals game two after a wild walk-off from Senior Matt Lloyd in the ninth inning propelled the Hoosiers to a 7-6 victory.

It was almost the exact same storyline as yesterday, but with a slight twist to the ending. Indiana started hot. A Drew Ashley single, followed by a pair of walks drawn from Matt Gorski and Matt Lloyd set up a bases loaded, no-out jam for Minnesota’s Sam Thoresen.

Much like Max Meyer on Friday, Thoresen was able to keep his composure by forcing a double play ball, allowing Ashley to score from third and getting Cole Barr to flyout to limit it to just one run.

After that, it was all Minnesota. They consistently were driving balls into gaps and taking advantage of Tanner Gordon’s fastball. Gordon didn’t have his best stuff by any means today, but still gave Indiana five innings of work that saves their bullpen for the rubber match on Sunday. Gordon gave up four earned on eight hits and struck out nine.

Braden Scott was his relief, making his second appearance of the series and it didn’t quite resemble the first. Scott came in facing a 4-1 deficit and left with the scoreboard reading 6-1. He was tagged with one earned instead of two, due to a fielding error by Cole Barr.

During Minnesota’s tear, Indiana was put on mute at the plate. After Drew Ashley’s single to lead off the bottom of the first, the Hoosiers did not record another hit until the sixth inning. In that stretch, 10 Hoosiers were sat down on strikes. The offense was yet again contained by a solid breaking ball exhibited from Thoreson.

Indiana didn’t start making its comeback until the seventh. An Elijah Dunham single set up a two-run jack from Ryan Fineman that brought Indiana within striking distance at 6-3.

Pivotal relief efforts from both Grant Sloan, who went 1.1 innings with three strikeouts, and Alex Franklin allowed Indiana to hang around. Franklin found himself in some trouble, giving up three singles, but Ryan’s Fineman’s return behind the dish came in handy yet again as he hosed another runner trying to steal second. Franklin would strikeout the last hitter and keep it at 6-3.

Sloan and Franklin weren’t the only unsung heroes. Tommy Sommer’s top-half of the ninth inning was just about perfect. He mowed through three hitters, striking out the side and breathing some momentum into a seemingly lifeless team.

Grant Richardson was one who needed that momentum. He had some fielding blunders in the outfield earlier in the game but made up for it in the ninth with a leadoff solo shot to pull Indiana within two runs with some dangerous bats looming. Back-to-back strikeouts from Justin Walker and Ryan Finemanmade the comeback seem impossible, but this club proved otherwise.

Walks by both Drew Ashley and Matt Gorski set the table for Indiana’s hero. Commonly referred to as “Batman” by Jeff Mercer, Matt Lloyd came to the plate as the winning run and in dramatic fashion pulled it off. On a 3-2 count with two outs in the bottom of the ninth, Lloyd sent a no-doubter over the right field fence to even the series at one game apiece.

The Hoosiers will look to take the series in the rubber match on Sunday with Andrew Saalfrank getting the start on the mound.