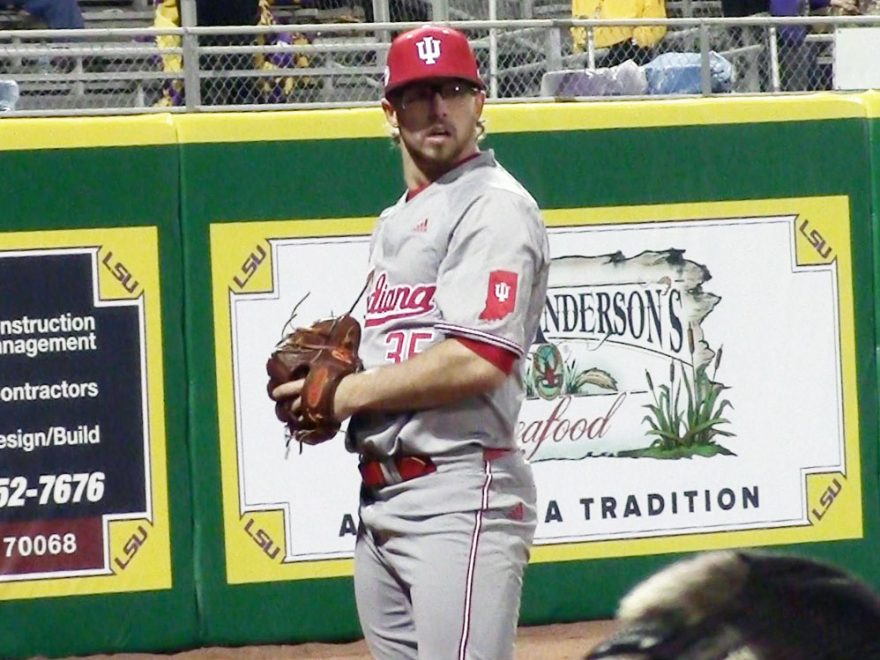 A clash between the biggest power bats in the Big Ten (Northwestern) and the league’s best ERA team (Indiana) proved to be quite an entertaining affair.

Morgan Colopy got the first hit of the game with an opposite field flair in the second inning. Collin Hopkins worked the count full but flied out to end the top of the second and strand Colopy. Tank Espalin was the fourth Hoosier in the first time through the order to work a full count.

Drew Ashley was hit by a pitch from Northwestern starter Mike Doherty to become Indiana’s third base runner of the game in the third inning. Grant Richardson hit a chopper up the middle to put Ashley into scoring position. The second full count walk to Barr of the day loaded the bases. Toetz was unable to deliver, striking out with one out. Then Kip Fougerousse did what Kip Fougerousse does: a two-out base hit on an 0-2 pitch to drive in two runs and get Indiana the early two-run lead. Doherty was at 56 pitches through the first three innings.

It only took Hoosier starter Tommy Sommer six pitches to get the side out in the first inning with fly outs. Two of those went to the warning track. Sommer started the bottom of the third with four pitch walk, but followed it up with a strikeout. Barr made a fantastic play to get the second out of the inning on a short chopper. Sommer finished the inning with a strikeout and only 30 pitches.

Tank Espalin got the first hit of his collegiate career in the top of the fourth inning with a two out double but was left stranded.

Northwestern got their first hit of the game with a lead-off double in the bottom of the fourth inning by Shawn Goosenberg. Sommer struck out Stephen Hrustich but a wild pitch to Michael Trautwein got Goosenberg to third. Sommer then struck out David Dunn and the inning ended with a fielder’s choice and no runs scored.

The Hoosiers ended Doherty’s day after getting two on in the seventh. Paul Toetz drove in one with an RBI double. Morgan Colopy drove in another with a sacrifice fly, and DH Tyler Van Pelt got a two out single to bring Toetz home giving Indiana what felt like a solid 5-run lead.

Sommer walked Dunn to start the seventh inning. After a fly out it went downhill for Sommer. He surrendered four straight singles before pitching coach Justin Parker turned to Nathan Stahl. One of those singles was a bases load grounder to Cole Barr that looked like an easy force out at home. Barr elected to go to first and the runner was ruled safe. With two runs in, Stahl got a critical strikeout of Goosenberg. Northwestern needed two out hitting of their own and got it from Hrustich who drove in a couple with a ground rule double to bring the game within one.

Stahl gave up one hit in the eighth but kept the Wildcats off of the scoreboard. Then after several weeks of not using his closer, Parker turned up the heat and got Matt Litwicki in to finish the game. Litwicki got 0-2 to Leo Kaplan and then tried to pull a string on him, but left the pitch up enough for Kaplan to hit it back up the middle for a single. Litwicki mostly stuck with the gas the rest of the inning but varied his locations. Goosenberg got on with a fielders choice and stole second base with two outs. Litwicki then struck out Hrustich to end the game, earning Litwicki his fourth save of the season.

Sommer got the win to move to a team best 4-1 on the season. Richardson, Toetz, and Fougerousse each had two hits. Barr had three walks. 4-7 in the order produced all five RBIs, all but Van Pelt’s produced by a freshman. Every Hoosier batter reached base at least once.

The win moves the Hoosiers to 14-7 on the season. The Hoosiers will remain one game behind second place Michigan who are still taking batting practice at the time of this writing up 21-3 over Minnesota in the ninth inning. League leading Nebraska  and fourth place Ohio State are both in tight games. Indiana and Northwestern face-off again Saturday at 2pm EDT. McCade Brown will get the ball for the Hoosiers, coming off last week’s combined no-hitter.