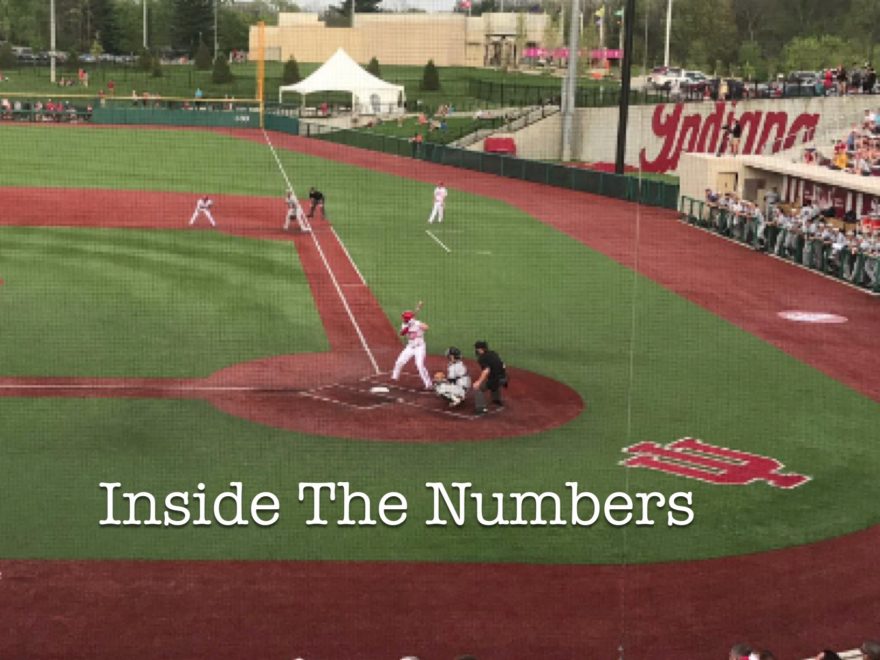 I don’t know about you, but watching the series against Pacific it seemed that the Hoosiers were getting tons of leadoff guys on but not really having a lot to show for it. Earlier in the season, however, it seemed like not as many leadoff guys were getting on, but the ones who did usually came around to score. So I looked at these numbers for the season (and for each week of the season individually) to see if there was anything to it.

This was highest during the second weekend of the season, where 82% of the leadoff hitters who reached base scored, including 100% of those who started on first base. However, only 11 leadoff batters reached base, the lowest of any week. This was also against the likes of Rutgers, Boston College, and Chicago St, so the Hoosiers were able to capitalize when they did reach.

On the other hand, last week the Hoosiers had 19 leadoff guys reach base, the most of any week so far. Only five of them would go on to score, for a season low 26%. Many of those who did not score were eliminated by either the double play or fielder’s choice. Even when runners started on second base they struggled to come home, with only two of the four scoring.

But where do these numbers stand in the grand scheme of things? Well, turns out that is kind of difficult to answer, at least recently. Evidently, this is not something which is often tracked. The most recent data I found for the MLB comes from the 2010 season, where around 40% of leadoff hitters who reached base came around to score (37.5% from first base, 58.5% from second base, and 83% from third base). So all things considered, the Hoosiers are sitting pretty well a month into the season.

This led me to take a look at the pitching side of this question. When the IU pitchers let the leadoff hitter reach base, how likely is that runner to score? Evidently the Hoosiers are better than would be expected on this side as well, allowing only 32% of those leadoff hitters who reach base to score (27.9% from first base, 44% from second base, and 1-for-1 from third base).

The numbers have fluctuated from week to week, with the worst week being the San Diego weekend at 43% of leadoff runners who reach base scoring. The best week on the pitching front matched the best week on the offensive front during the second week, where only 20% of the opponent leadoff batters who reached base scored (compared to 82% for the Hoosier bats).

So what does all of this mean? Right now, not necessarily a ton. It’s still early in the season, and as we’ve seen, the numbers are changing a lot from week to week. But it should be noted that the first time the IU offense really obviously struggled was when they were getting their leadoff guys on base but not bringing them home. While I trust the bats to pick it back up, this could be something to watch over the next few weeks.