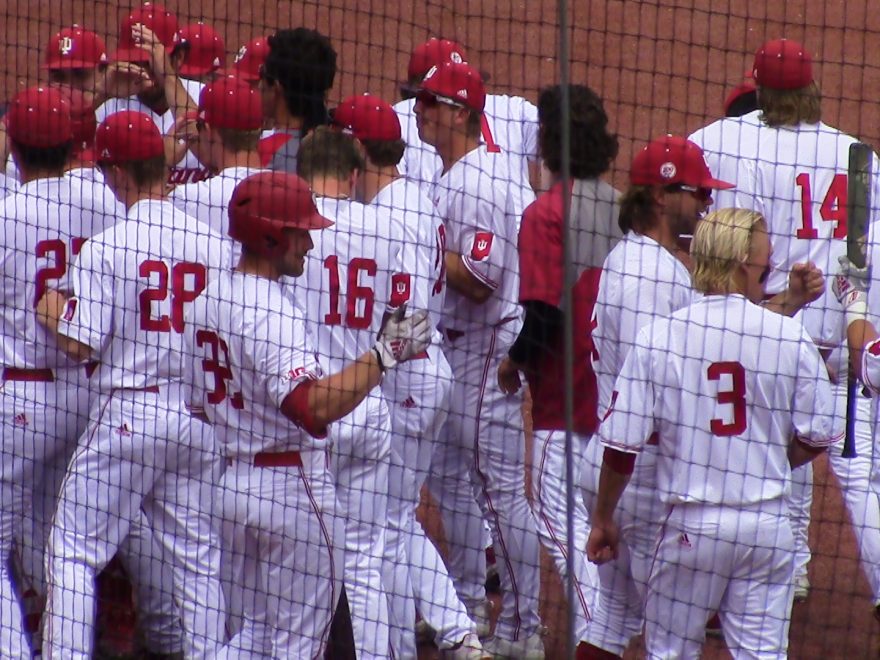 The Indiana University baseball program honored academic and athletic seniors before the first pitch of the final straight series at Bart Kaufman Field (the Hoosiers still host a 3-team “pod” later in the month). The ceremony showed the seniors getting their framed jerseys. 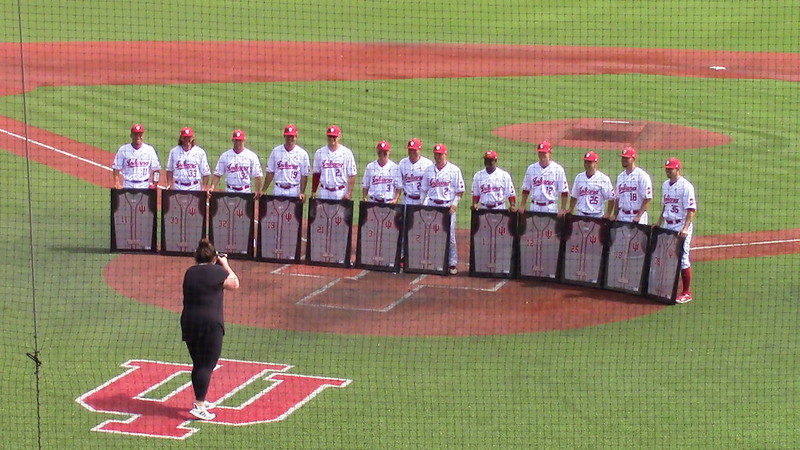 Indiana Sunday starting pitcher Gabe Bierman provided the Hoosiers with just what they needed to conclude a battle of weekend at Bart Kaufman Field. Both offenses were doing a great job of usually avoiding pitches off the plate and punishing pitches in the strike zone. 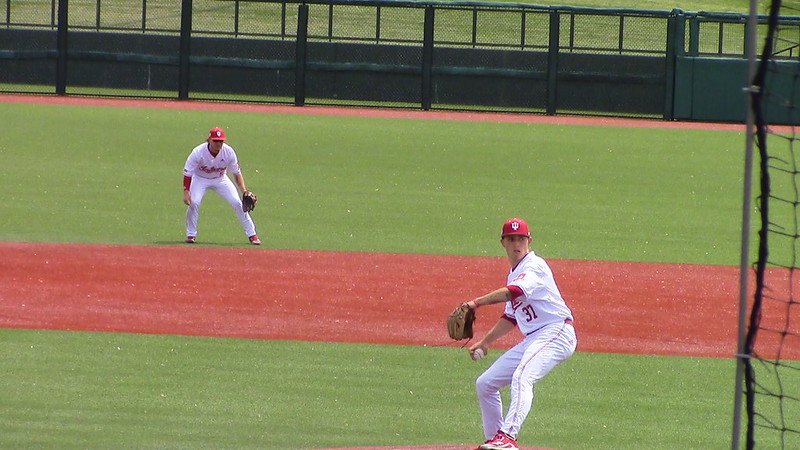 Bierman was deliberately trying to work in the zone today. After the game he said, “I’ve been throwing my off-speed for strikes lately.” The ability to work his change-up in the zone allowed him to go 6.0 innings allow 5 hits and 4 runs (3 earned) while only walking 2 and striking out 9. Iowa worked Bierman to 110 pitches. the worst damage happend on Bierman’s 100th pitch in the sixth inning when Trenton Wallace hit a 1-2 pitch over the the right field wall for a two-run home run. Bierman stayed in and got the next two Hawkeyes out to end the day with a 4-run Hoosier lead. 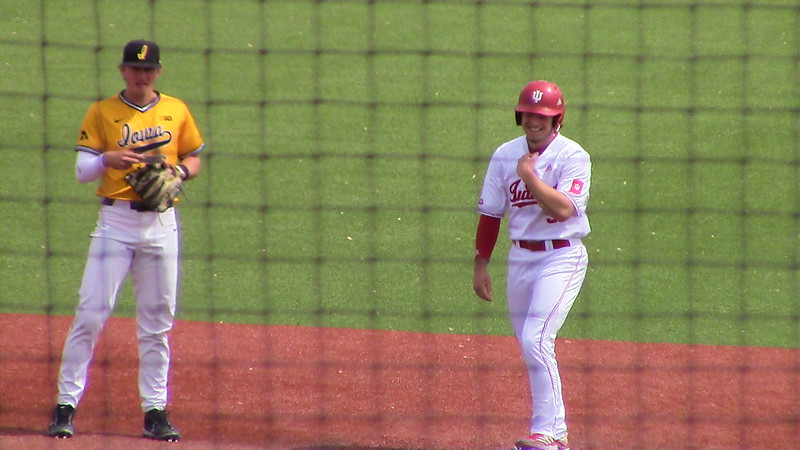 The bulk of the Hoosier’s scoring up to that point was a wild bottom of the fourth inning. Indiana and Iowa were tied a two going in. Hawkeye left handed started Cam Baumann allowed a double to Collin Hopkins sandwiched between a pair a of strikeouts. Drew Ashley singled and Paul Toetz drove them both in with a single bring up Grant Richardson. 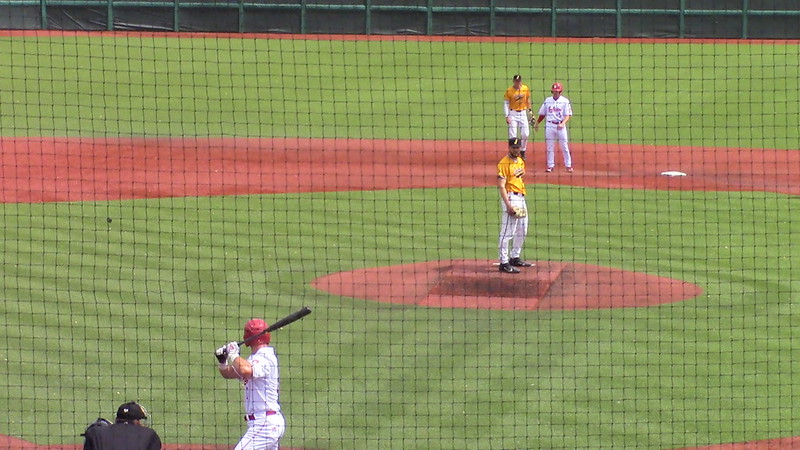 After the game, Coach Jeff Mercer reflected on the next two at-bats. “The triple to right-center on a 2-0 left handed slider, and that is something he has really worked on is being more balanced and handling off speed pitches better to the middle of the field.” The triple drove in Toetz and brought up Cole Barr. Richardson was getting several huge leads and educing a pick off throw. “It was something we intentionally practiced this week and we practiced stealing home against those guys.” Baumann might have been thinking too much about Richardson there because Barr tatooed a 2-2 pitch to left center and gave the Hoosiers a 5-run lead. 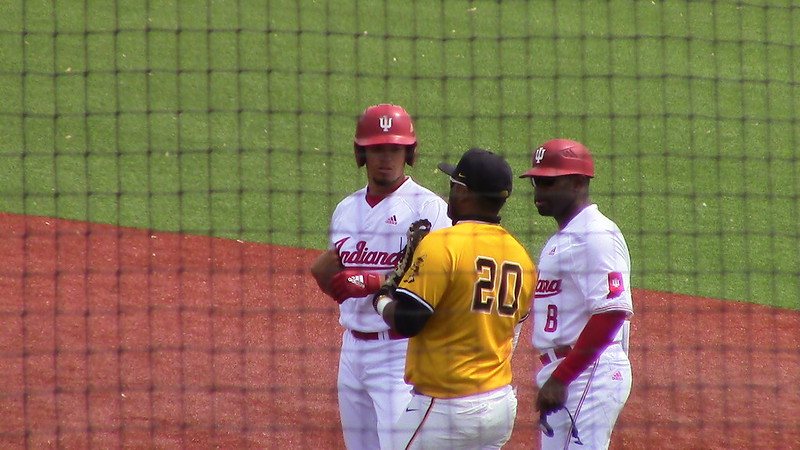 The Hoosiers added one in the bottom of the fifth when Hopkins doubled, was moved over by a Tank Espalin groundout and scored on a throwing error on a dropped third strike to Drew Ashley.

The first out of the bullpen for the Hooisers was Nathan Stahl. With one out he gave up a solo home run to Izaya Fullard. After a wlak and a hit Pitching coach Justin Parker turned to senior Braden Scott  who enduced two quick outs.

In the bottom of the seventh Ethan Vecrumba was brought in as a pinch hitter for the designated hitter. “Just how sudden and how physical he is. And I thought he was a good match-up [for Duncan Davitt].” Mercer thought that Davitt’s breaking ball was getting “soft” with the extended work and with the wind blowing out he though Vecrumba “could change the game with one swing.” It didn’t work out this time as Vecrumba grounded out.

With two outs Hopkins doubled for the third time in the game (the ninth of the season) and scored on an Espalin single to get the Hoosier lead back to four runs. 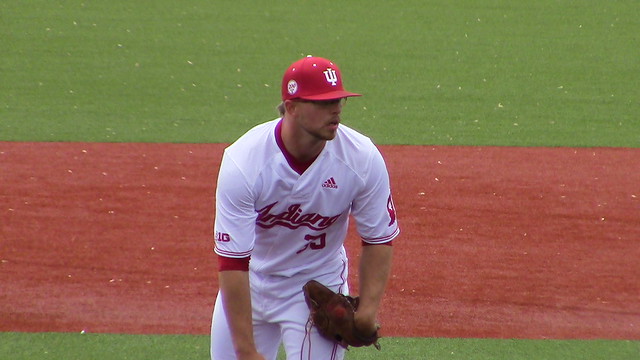 Indiana closer Matt Litwicki came in to pitch the eighth. Mercer explained the decision, “the reality was we wanted to put our best guy in the most high leverage inning… which was going to be the eighth at the moment.” With one out, Brayden Frazier bunted his way on and advanced to second on a throwing error. After a groundout, Ben Norman homered off of Litwicki who then struck out Fullard. 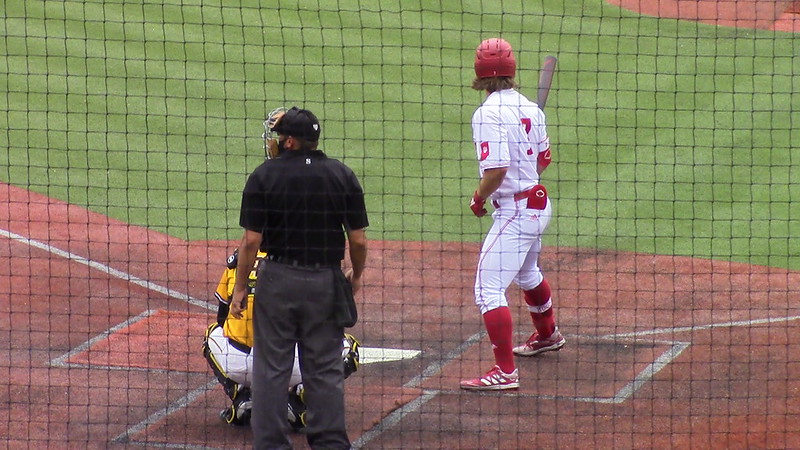 With only a two run lead, Barr and Morgan Colopy walked with two outs in the bottom of the eighth to bring Vecrumba back up. Iowa was playing him deep in the infield, and given Vecrumba’s speed a bunt might have been considered. “You never think hit a three run homer, but that was an option with him.” Vecrumba swung and extended the Hoosier lead to five.

“We were going to go to Reese Sharp in the ninth,” but Litwicki indicated he could go one more. “Hopkins comes in and says stuff is good velo’s good” so Merecer and Parker sent Litwicki back out. A pair of two-out doubles cut the lead to four, but a groundout sealed the victory.

Around the country, Rutgers concluded a stunning three game sweep of #22 Nebraska and Illinois took the front end of a doubleheader against Michigan. That allowed Indiana’s win to vault then into first place in the Big Ten standings. The Hoosiers next travel to Piscataway, New Jersey, on Friday to play in a three-team pod with Nebraska and Rutgers. Indiana will be facing Rutgers for the first two games and for the third and fourth games will be against Nebraska who will be playing their first and second of the weekend. This means Indiana will face the top two starting pitchers for each team while protecting a slim 0.5 game lead in the conference.