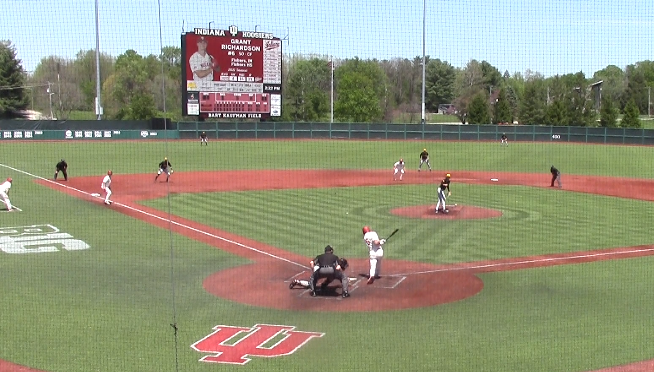 Indiana starter McCade Brown got into a jam early. A single and walk had two on with no outs. Cole Barr made a spectacular play at third base, fielding the ball and tagging third for the force out. With his momentum heading toward foul territory, Barr made a spectacular throw to first to get the double play. Brown induced a fly ball to end the inning. 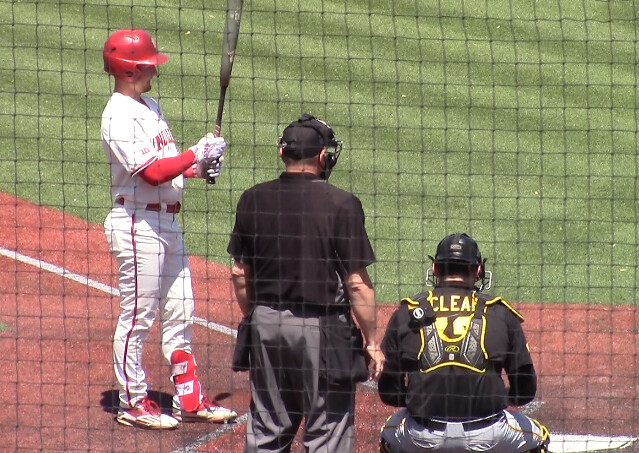 The bottom of the first was wild. Right handed starter Drew Irvine was run from the game without recording a single out. Drew Ashley and Paul Toetz doubled. Grant Richardson got a single. Barr walked and Morgan Colopy singled. A bases loaded hit-by-pitch of Tyler Van Pelt brought in the third Hoosier run and forced a very upset Rick Heller to go to his bulllpen. The Hoosiers plated 5 in the first.

After the game, Barr told the media, “It gave us a lot of confidence going forward. It’s like that ball started rolling.” He added, “We scored multiple runs in several innings. I think we were ready to go from the beginning.” Coach Jeff Mercer said, “I’ve thought for the last several weeks that we’ve shown some signs of growth throughout.” 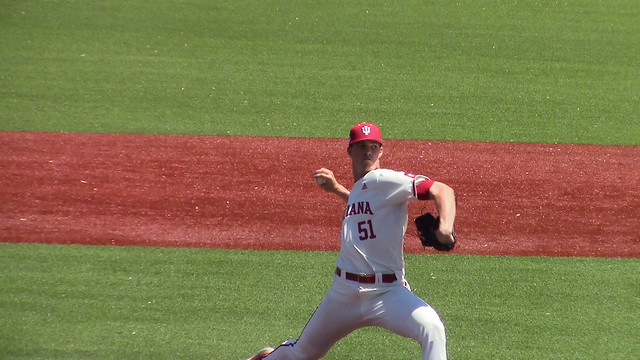 Iowa struck right back in the bottom of the second inning. Brown managed to get two outs, but then lost the strike zone walking in two runs and giving up a third. Pitching coach Justin Parker went back to Brown in the third inning. Brown was throwing more center strikes and got two outs. Eventually Iowa started squaring fastballs up scoring two on an RBI single. Parker had finally seen enough and turned to John Modugno in long relief.

Mercer said after the game, “the reality is that our pitching is tremendous. those guys have been outstanding. We have one of the best pitching coaches in the country and those guys are prepared to go out every weekend and perform at a high level.” Mercer is confident that the struggles of Tommy Sommer and Brown this weekend do not “make a season”. 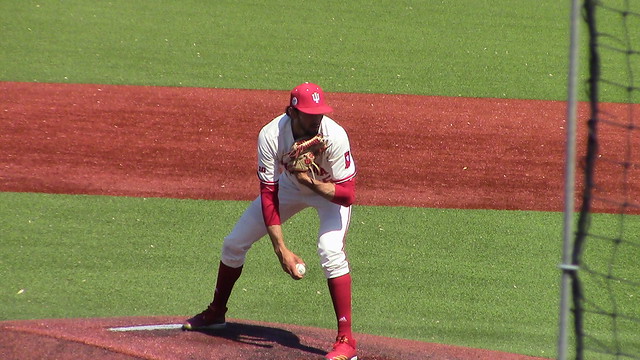 Modugno got the last out of the third and came back out for the fourth. He gave up a pair of singles to put runners on the corners with one out. A sacrifice fly cut the lead to two. Despite the run, Modugno got out of the inning with having only thrown 14 pitches. Modugno gave up a single and two walks in the fifth, but left the bases loaded.

Tank Espalin and Toetz drove in a couple of runs with hits in the bottom of the fifth to extend the IU lead to four. The Hoosiers would add a couple more in the sixth with a Cole Barr home run off of the side of the scoreboard and Kip Fougerousse added another with an RBI double to take the score to 12-6 where it would remain. 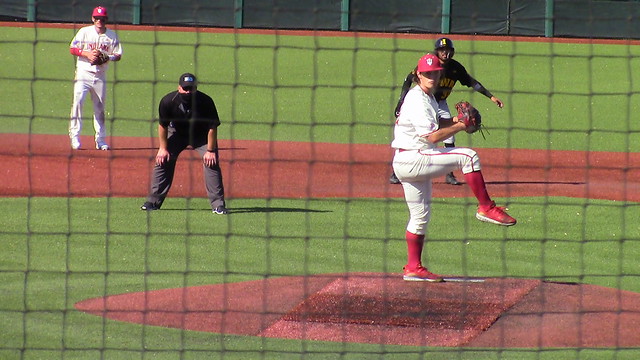 Ty Bothwell pitched a scoreless last four innings to earn his first save of the year. Mercer said that, “Ty being able to finish that game was huge.” That allowed several bullpen arms to be fresh for Sunday including Matt Litwicki, Nathan Stahl, and Grant Macciocchi.

The win combined with a Nebraska loss to Rutgers and Michigan splitting a double header with Illinois, brought the Hoosiers back into second place in the Big Ten standings and only 0.5 games back of first. Indiana and Iowa have a rubber match Sunday at 12 noon.