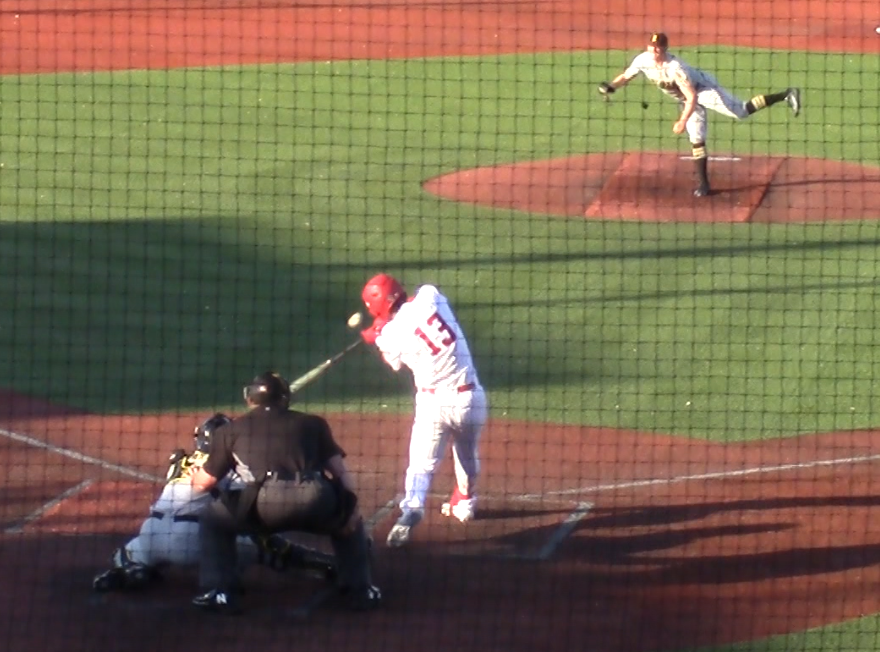 Indiana baseball has still won two-thirds of their games, but now sit 0-5 against the top 6 teams in the league after dropping a close contest against Iowa. It has to be especially frustrating for the Hoosiers given that they managed to score three runs off of Iowa lefty ace Trenton Wallace. After the game Coach Jeff Mercer said, “I thought we were competitive against him.” Mercer added that, “the splits were actually a little more positive for left handed hitters.”

Indiana starter Tommy Sommer had traffic off of hits in each of his first two innings of work. A 4-6-3 double play erased the base runner in the first inning. Sommer was not missing bats or enticing Hawkeye hitters to swing out of the strike zone. An error by Kip Fougerousse on a pick off play put Zeb Adreon into scoring position. Sommer then got his first strikeout on a check swing by Brayden Frazier. A great play to stop a middle grounder from getting to the outfield by Tank Espalin kept Adreon at third base. It didn’t matter though as Brett McCleary bunted for an RBI single to put the Hawkeyes on the scoreboard first. A fielder’s choice ended the inning with Tommy Sommer having thrown 39 pitches.

The first two Hoosier batters went down on strikes in the bottom of the first to Wallace. Iowa employed an extreme shift against Cole Barr, placing three infielders on the left side of second base. Barr hit a liner right at where a second baseman would normally being playing and it rolled to the right centerfield wall for a triple. On the next pitch Colopy drove in Barr with a bloop single. An opposite field single by Fougerousse got Tyler Van Pelt to third base. Collin Hopkins drove him in with a sacrifice fly to give Indiana a 2-1 lead going into the third inning. Wallace was at 33 pitches. 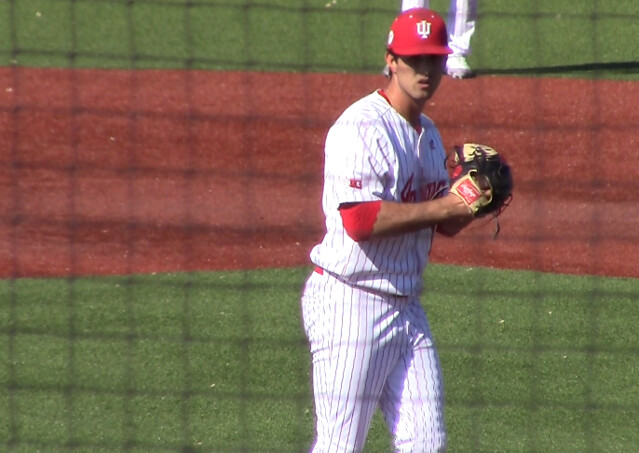 Sommer started off the third inning walking Ben Norman on four pitches. Norman stole second on a 2-2 ball to Izaya Fuller who grounded out. Norman then stole third without a throw to put the tying run 90 feet away with less than two outs. Austin Martin then took a 3-2 pitch off of the scoreboard to give the Hawkeyes the lead right back. Sommer then got Adreon to pop up to Fougerousse and then struck out Dylan Nedved. Sommer was already up to 68 pitches.

The top of fourth Sommer should’ve had a one-pitch out, but Tank Espalin misplayed a hard grounder by Frazier. Sommer loaded the bases and walked Norman to score Frazier. Then Sommer got the next two to end the threat. Sommer handed the ball over to Braydon Tucker with Iowa holding a 4-2 lead. It took Tucker 16 pitches to face the minimum in the top of the fifth thanks in part to a ground ball double play.

Hoosiers added a run in the bottom of the fifth with an RBI groundout by Grant Richardson. Iowa immediately struck back when a lead off walk and a hit was compounded by a fielding error. Another hit drove in run. Iowa had a three run lead having scored three unearned runs.

Braden Scott came out for the top of the seventh and struck out the first batter he faced. Paul Toetz made a major league level play on a hard ground ball up the middle.

Wallace came out for the bottom of the seventh with 104 pitches already thrown. Hopkins got a lead off single but the Hoosiers managed to only see 11 pitches before ending the inning down three with six outs left.

Scott walked the first batter faced in the eighth before striking out the next two. An infield groundout ending the inning. Mercer was very happy to have Scott, his expected key bullpen piece preseason, back to form. “Each week it seems we’ve added a new arm. Braden Scott was really good today. It’s good to have him really back in the fold.”

Iowa’s Nedved moved from second base to the mound in the bottom of the eighth. “We got locked back in against [Nedved].” Mercer said.  Richardson lead the inning off with a double down the right field line. Barr drew a walk and Colopy moved them both into scoring position with a groundout. Ethan Vecrumba pinch hit and drove in Richardson with a ground out. Fougerousse then drove in Barr with a double to cut the lead to one.

Freshman reliever Reese Sharp was tasked with keeping the game within one. “Reese Sharp was outstanding. Really, really overpowering stuff,” Mercer explained. It was a rare 1-2-3 inning for Iowa with a fly out, ground out, and strikeout.

Unfortunately for the Hoosiers, Nedved was more effective in his second inning of work to close the game. Espalin struck out and Ashley grounded out. Paul Toetz got down 0-2 but made it interesting when he made solid contact, but it wasn’t deep enough and the Iowa victory was official 6-5.

Indiana dropped to third place in the Big Ten as Michigan was idle due to COVID-19 issues in the Northwestern program. Michigan will now play two double headers against Illinois on the weekend instead of the scheduled pod. Indiana maintained only 1.5 games back of #22 Nebraska, who also dropped their series opener to Rutgers.

Iowa is now only 0.5 games back of Indiana. The Hawkeyes would need to sweep the series to leave Bloomington in front of the Hoosiers in the Big Ten standings. The series resumes Saturday at 2pm EDT at Bart Kaufman Field.