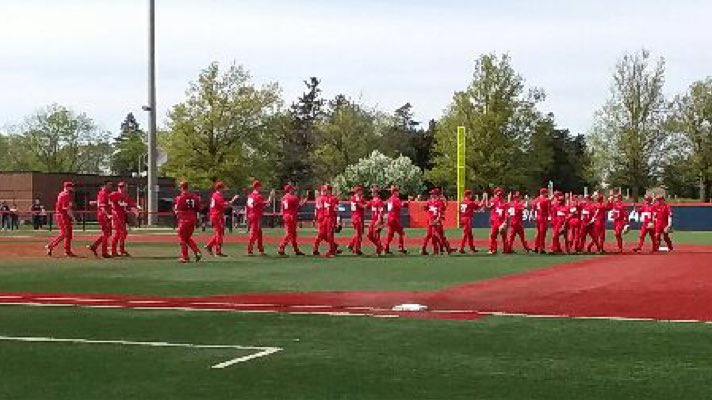 After the Indiana offense was virtually nonexistent on Friday and Saturday, the bats exploded for three home runs in a 9-2 victory on Sunday.

As has often been the case on Sundays, the depth of the Hoosier starting rotation led to a big series-ending win for Indiana. Andrew Saalfrank threw seven shut-out innings while the offense took the lead in the 3rd inning and never looked back, scoring three runs in the 5th and five runs in the final three innings. A two-run Illini shot in the 9th inning barely put a dent into the lead.

Saalfrank breezed through a 1-2-3 1st inning before laboring through the next two innings where he stranded five runners. He only gave up one more hit and a walk over the next four innings; Saalfrank would face the minimum in three of those innings. On the game, Saalfrank struck out eight batters while walking three. Braden Scott took over in the 8th, where he faced the minimum thanks to a 4-3 double play. Scott gave up the only runs of the game in the 9th, with a double and home run. Connor Manous finished off the 9th inning with a groundout and strikeout.

The offense improved immensely on Sunday, as the Hoosiers put up 10 hits to go along with 10 walks and plunks. Drew Ashley recorded a three-hit day, with singles in the 3rd, 4th, and 6th innings. Matt Lloyd picked up a pair of hits with a single and double, as well as a pair of walks. Cole Barr, Eli Dunham, and Ryan Fineman all went yard during the game. The final pair of hits came from Grant Richardson and Justin Walker. While Matt Gorski did break his hit streak on Sunday, he did reach with a walk and pair of fielder’s choices, and stole second base all three times he reached base.

The Hoosiers will travel to Lexington on Tuesday to take on the Kentucky Wildcats, who are currently in the top 50 in the RPI. With Dillon Marsh, the mid-week starter for the month of April, pitching five innings on Sunday against Arkansas, it’s probably more likely that the Hoosiers will face LHP Mason Hazelwood. He is currently 2-3 with a 1.21 ERA. Opponents are hitting just .190 off of him, and he strikes out more than a batter an inning. The Hoosiers have several different options to start the game on Tuesday, as only five pitchers came out of the bullpen at Illinois, and none of them threw more than two innings.