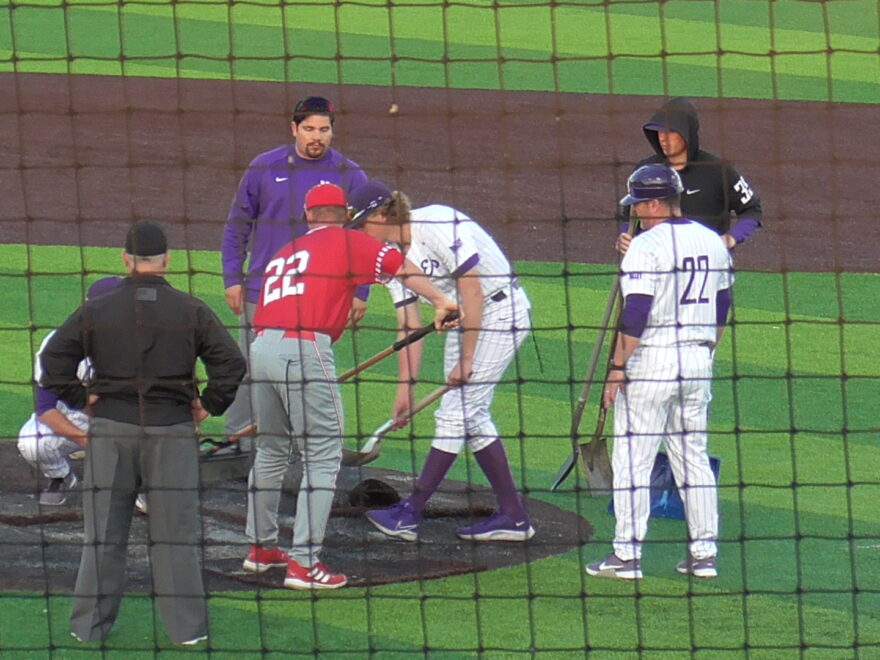 Evansville plates Five on two home runs, cashing in on walks and errors

EVANSVILLE, IN – In a game that will be best remembered for a 29 minute mound repair delay which saw both head coaches physically repairing the mound turf, Indiana failed to capitalize on 10 hits and lost to the Purple Aces in Evansville 8-4.

The story of the game was much like the season as whole. Indiana ran out multiple pitchers who were able to get 14 of their 24 outs via the strikeout, but also walked nine and hit four batters. For the season Indiana is ranked 27th in the nation in strikeouts per nine innings. At the same time, no other Power-5 school has plunked as many batters as the Indiana Hoosiers.

Nathan Stahl plunks the lead-off man to start the bottom of the first. pic.twitter.com/7SH7IKlOYH

Offensively the Hoosiers got production from a few guys. Bobby Whalen hit his second homer of the season, almost clearing the netting over left field designed to protect the cars on the highway. Evan Goforth walked and scored in his first time starting at second base. Ethan Vecrumba walked and scored in his first time in the batters box since returning from injury (he pinch ran on Sunday). They were both driven in in the ninth inning by Phillip Glasser double. Matthew Ellis’ third single of the game then drove in Glasser. It just wasn’t enough to overcome the efficent Aces’ offense.

The Hoosiers drop to 11-16 on the season (1-2 in the B1G). Indiana is back in action Friday 4pm at Alexander Field in West Layette against rival Purdue (1-3 in B1G action so far).