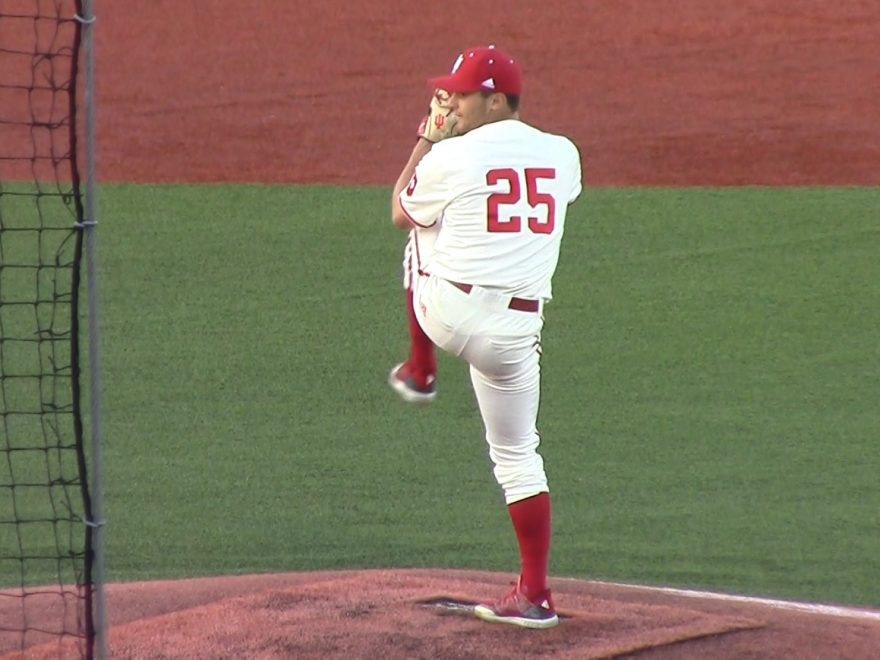 In a must win game Indiana turned to its top prospect in pitcher McCade Brown. In the first inning Brown walked in two runs. Brown’s Maryland counterpart, Sean Burke took advantage of Indiana’s poor hitting stretch and had a no-hitter going through 6.2 innings until Kip Fougerousse got a single with two out in the seventh.

Brown only lasted 3 innings, but managed to give up only the two runs. Braydon Tucker gave up only one run in three innings of relief. The Hoosiers threatened with bases loaded in the top of the seventh. Ethan Vecrumba made good contact in a pinch hitting attempt but the ball died on the warning track for a fly out.

Reese Sharp struggled in the bottom of the seventh giving up two more runs. Sharp stranded the base loaded and had a warning track scare of his own that Grant Richardson collected in center field.

Drew Ashley hit a solo shot in the top of the eighth. The Hoosiers turned to senior Connor Manous on the mound in the bottom of the eighth. Manous managed to keep the Terps off of the scoreboard.

An infield single by Hunter Jessee drove in a run in the ninth and Morgan Colopy came to the plate as a pinch hitter representing the tying run. Colopy became the Hoosier’s 16th strikeout victim of the game.

The loss dropped Indiana to 25-18 only half a game ahead of fifth place Iowa. The third straight series loss paired with at least three “stolen” bids in small conferences has likely ended the Hoosier’s hopes of playing in an NCAA Regional in 2021.

Indiana will have an opportunity to finish the season on a bright note Sunday in the season’s final game. The Hoosiers will play Maryland one more time with likely pitcher being John Modugno. Ty Bothwell should also be available for long relief.