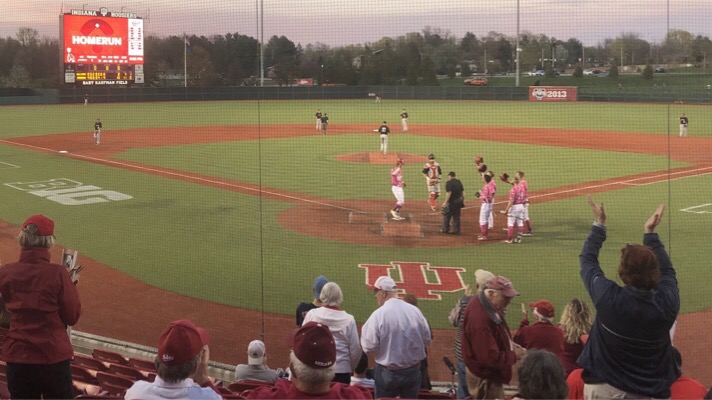 Indiana plucked the Cardinals out of the sky by the tune of five homeruns and 14 strikeouts in route to a 14-3 midweek victory.

Tommy Sommer made his first start since March 3rd and he did it in spectacular fashion. He ran into some trouble in the third with Ball State scratching across with a couple of singles and a double. Other than that, he was lights out surrendering just four hits, two earned runs while fanning a career-high 10.

Sommer’s big night on the mound was backed by some major run support. The Hoosiers tacked on four runs in the first thanks to a two-RBI triple by Scotty Bradley and a homer from none other than Cole Barr. Barr took sole possession of the Big Ten’s home run lead over teammate Matt Lloyd, but that didn’t last long.

Lloyd tied it right back up with a homer of his own in the fifth for his thirteenth of the season tying Barr. Quickly following that, Justin Walker and Drew Ashley contributed two RBI-singles that gave Indiana a comfortable 8-2 lead after five.

Scotty Bradley added to the homer run parade with a shot of his own in the sixth and Matt Gorski connected with a moonshot in the seventh. He cleared the bases with a grand slam that cleared the video board to put it out of reach at 13-2.

Matt Litwicki was Sommer’s relief in the seventh and contributing a solid two innings. Ball State would tack on one more after Grant Richardson was shaken up after a diving grab in right field for their third run of the game, but it wouldn’t matter. Indiana’s bats were just too hot.

Sam Crail took full advantage of his substitution in the eighth, taking Ball State deep with a shot to center that banked out the scissor lift behind center field.                     Austin Long shut things down in the ninth and Indiana improved to 25-12 on the year after their eighth straight win.

It was an all-around effort in the Hoosiers’ victory. A pair of big-league diving plays from Cole Barr at third and towering home runs allowed Indiana to coast to an impressive win. They now look ahead to the weekend series against Michigan State.