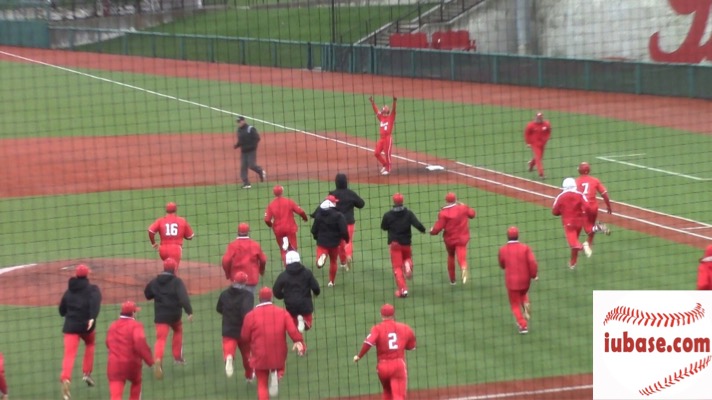 Indiana didn’t have the help from the long ball in this one, but still managed to squeak out the 6-5 victory in extra innings.

Cam Beauchamp started it off for the Hoosiers on the mound and ran into some trouble early. Beauchamp retired the first hitter, walked the second and gave a single to the third. A costly drop by Grant Richardson in foul territory came back to bite Indiana. Evansville’s Craig Shepherd went from an out to driving in an RBI double to give Evansville the 1-0 lead. A ground ball ensued and scored the second run for the Aces before Beauchamp got out of it.

Indiana went down quietly in the bottom half and Evansville wisely stayed on the attack. Another RBI double, this time by Sam Troyer gave the Purple Aces hope in avoiding the sweep by making it 3-0.

It didn’t take Indiana long to reply. Three straight doubles by Scotty Bradley, Cole Barr, and Grant Richardson quickly made it a 3-2 game in the bottom of the second. Elijah Dunham walked, and Drew Ashley got pegged to load the bases with two outs for Matt Gorski who hopped aboard the doubles train and added two more runs to take the 4-3 lead.

That’s when the pitching stepped up for both teams. Conner Manous relieved Beauchamp for two scoreless innings and Braden Scott followed suit contributing two scoreless frames of his own. Gabe Bierman was next out of the pen for a scoreless seventh and it looked like Indiana was just going to ride out the lead, but Grant Richardson had other ideas.

He started the eighth inning off with a double and Coach Mercer broke out the textbook to get him in. Justin Walker sacrificed bunted Richardson to third and Richardson was able to score on a wild pitch giving the Hoosiers a nice two run cushion with Matt Lloyd on the mound.

Lloyd got the final out in the eighth, but he was needed to lock it down in the ninth. It wasn’t Lloyd’s day though as Evansville rattled off four straight hits and came within one before Lloyd would walk in the tying run. However, Indiana’s defense came up huge with a run saving play at the plate from Ashley and a beautiful double play turned by Justin Walker and Scotty Bradley to keep it tied at 5-5.

Indiana went down 1-2-3 in the ninth and to extra innings they went. Austin Long came out of nowhere to strike out the first two hitters in the tenth and after an Evansville double, he would set down a third Ace on strikes. Long’s performance was pivotal given how much momentum Evansville had after their two-run ninth.

That set up Justin Walker’s big time one out double in the bottom half of the tenth and after two walks, Drew Ashley came to the plate with the bases loaded.

Ashley sent his hometown team packing after drilling a ball to the warning track for a base knock and Indiana would clinch its seventh straight victory to improve to 24-12 on the year.