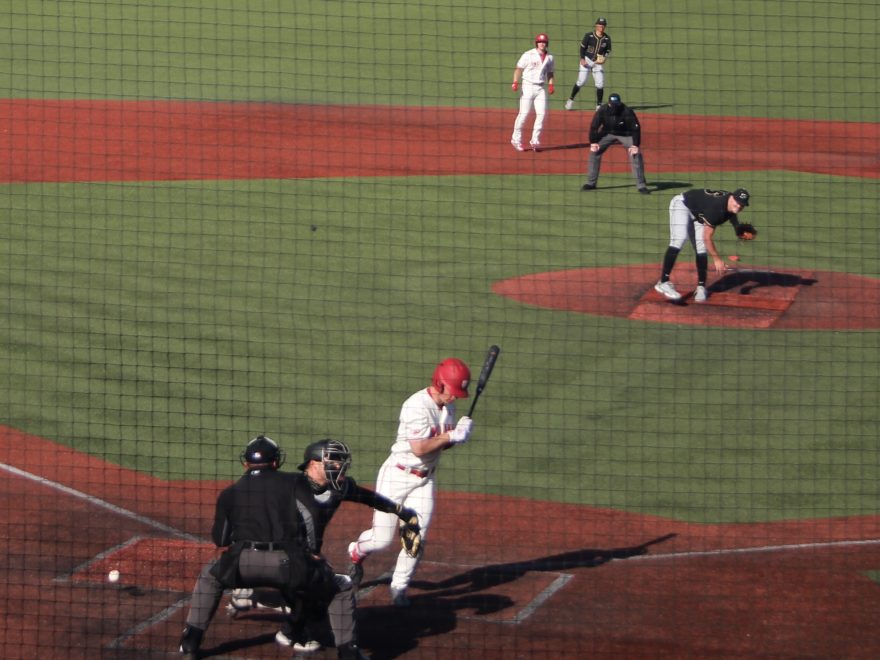 The Hoosiers had managed to work out of several tough spots so far this season. Digging out of two holes in a row against the Big Ten’s bottom dweller was just too much on a day when everything seemed to be going right for Purdue. Acting Head Coach Dan Held said after the game, “Tip your cap to Purdue, those guys did a really good job. They laid off some tough pitches.”

Drew Ashley was quick to extend his on base streak to 35 games, drawing a walk from Purdue starter Calvin Schapira to lead off the game. Paul Toetz later drove him in with a double down the left field line. 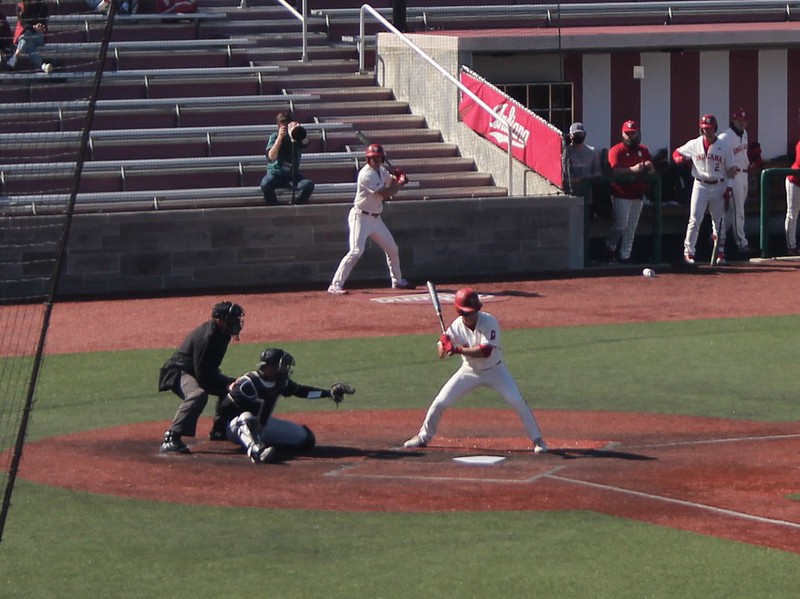 McCade Brown coming off a national pitcher of the week performance gave up a lead off double in the second inning and a couple of grounders, the later being a single allowed Purdue to tie up the game. Brown was sitting 91-92 touching 93 with a fastball heavy mix in the inning. Purdue had no trouble with fastball in the third inning as Brown was struggling to throw his 80 MPH curveball for a strike. Held said of Brown’s curveball, “I didn’t think he had a good feel for it.” 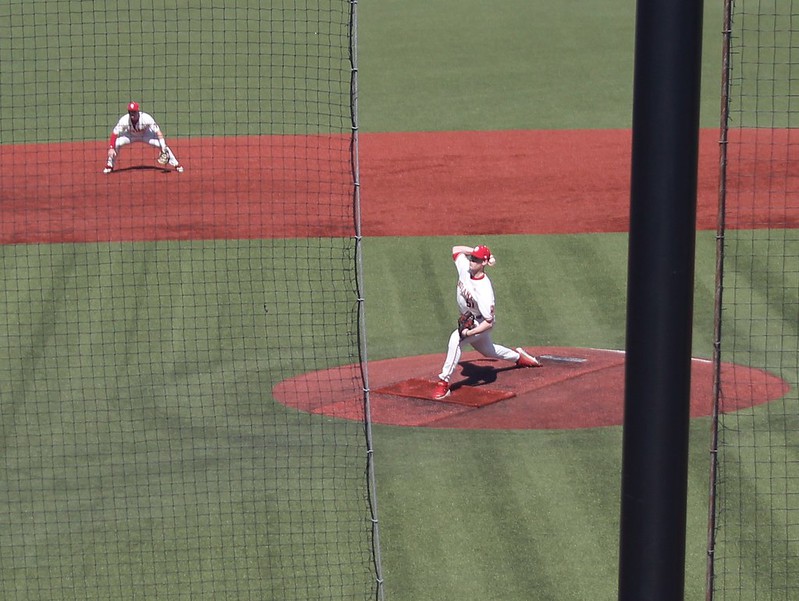 He was seemingly out of the inning with limited damage when Cole Barr threw a clear double play ball into centerfield. Instead of ending the inning, things got worse for Indiana as the Boilermakers tallied up 4 runs in the frame.

Richardson was hit by a pitch to start the bottom of the third inning. Barr moved him to second with a chopper back to the pitcher. Toetz struck out on six pitches and Fucci struck out on three.

Modungo had been warming up, but acting head coach Dan Held elected to run Brown out. Brown seemed unfazed by the rough third inning. He immediately struck out Skyler Hunter on three pitches, all fastballs. He only need five more pitches, all strikes, to get two more outs by contact. The bounce back inning was a very positive sign for Brown.

Morgan Colopy hit a two out double in the fourth and Grant Macciocchi drove him in with a single to cut the Purdue lead to three runs. Macciocchi then stole second before Ashley flew out driving Schapira’s pitch count to 73.

Brown walked one but stranded him in the fifth. Barr hit a double with one out in the bottom of the fifth and advanced to third on a wild pitch. Toetz then drives him in with a single cutting the Purdue lead to two. Then Kip Fougerousse pinch hits a double to drive in Toetz from first and cut the lead to one. This would end Schapira’s day at 88 pitches.

Held turned to John Modugno to start the sixth with IU now down by only one run. Modugno ran into some trouble giving up three hits and a run. Braden Scott was called in for the seventh and only gave up one hit and no runs. 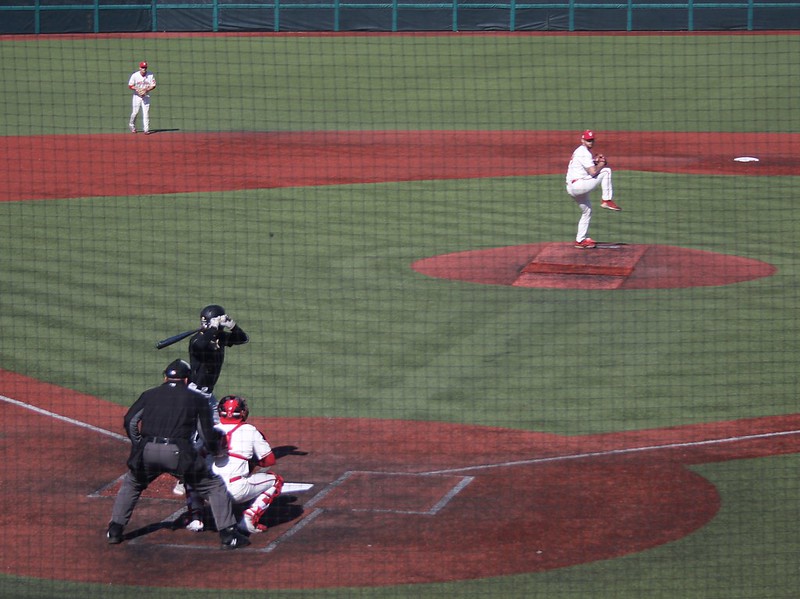 Landon Weins came in to pitch for the Boilers in the seventh with an off-speed heavy mix from the right side and retired the Hoosiers 1-2-3 putting Indiana in a tough spot with only two innings to make up a two run deficit. Braden Scott and Connor Manous each gave up a run to push the Purdue lead to 4 before the bottom of the ninth. 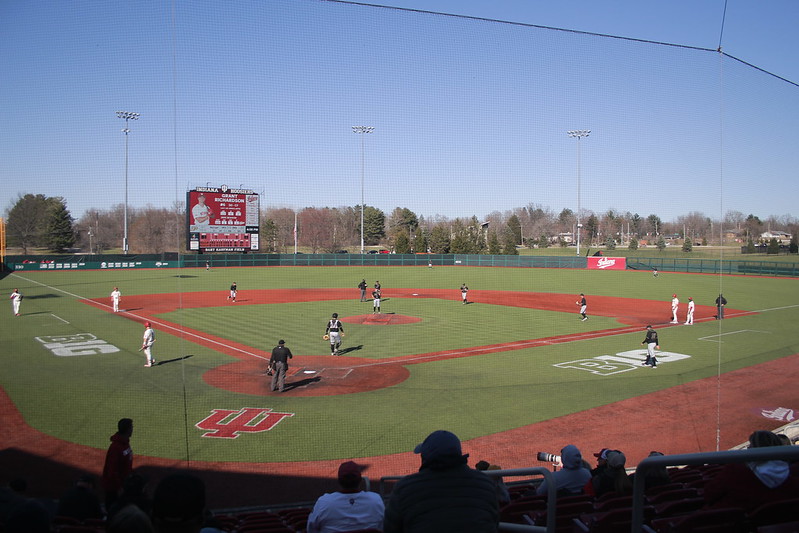 An Ashley double and a Richardson walk forced Purdue to go to Nolan Daniel in the ninth to match-up a right handed pitcher against the right handed hitting Cole Barr. Barr worked a full count and then an RBI single to bring up the tying run in Paul Toetz. Indiana would get one more base runner when pinch hitter Hunter Jessee was plunked, but Daniel ended up with three strikeouts in the inning, earning the save for the Boilermakers.

Michigan defeated Illinois 8-1 on Saturday gaining back the game they lost on Friday. Michigan managed to go 4-0 against Purdue last week. It’s important to point out that while Purdue is 2-7, every team they have faced has a winning record up to this point and over half of their games have been played against the league’s top two teams.

The Hoosiers and Boilers meet up one more time for a rubber match today (Sunday) at 1:00 pm EDT. Gabe Bierman will get the ball for Indiana.