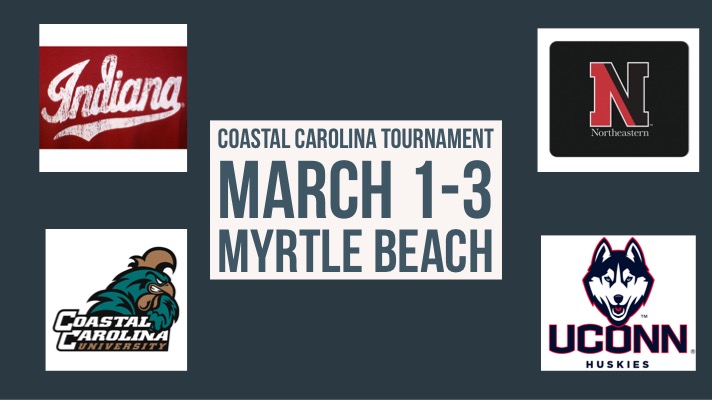 Indiana University Baseball has updated the posted 2019 schedule. The biggest news is the addition of a strong slate of opponents in the Coastal Carolina Tournament held March 1st through 3rd. As predicted, one of those games will be against host Coastal Carolina. The Chanticleers were a regional host in the 2018 NCAA Tournament and the 2016 National Champion. The other opponents will also be NCAA Regional teams as UCONN and Northeastern were both at-large entries into 2018 postseason field.

The Coastal Tournament will start on Friday March 1st against Northeastern (36-21 in 2018) of the Colonial Athletic Conference. The UCONN match-up will be a Saturday double-header. UCONN (37-22-1 in 2018) was impressive in the American Athletic Conference last year and was in consideration for a regional host site. The Sunday game will be a rematch against the host Chanticleers (43-19 in 2018) who dropped last years’ game to the Hoosiers 6-5.

There are also one, maybe two, location changes in the updated schedule. The three-game series originally listed as at Evansville on April 12-14, now has the Friday game still in Evansville, but the weekend games are now at Bart Kaufman Field in Bloomington. Also the boldly scheduled, long underwear required, midweek matchup against Butler on February 27th is now to-be-determined as far as location goes.

I have plugged all of these changes into my model (I marked Butler as a home game to be conservative) and now the 2019 strength-of-schedule (SOS), based on 2018 results, puts this slate as a very slight improvement over the 2018 SOS.

This RPI prediction would likely result in an NCAA regional berth with a #3 seed. If the Hoosiers’ opponents perform the same in the aggregate from 2018 to 2019, the Hoosiers will likely need somewhere in the ballpark of 34-36 wins in order to get an at-large berth to the 2019 NCAA Tournament.