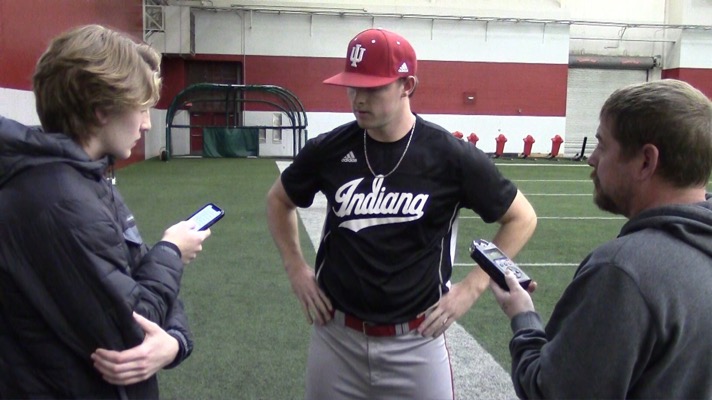 Calm, cool, collected, and focused. From the first words uttered from Coach Mercer’s mouth, to each interview with his players, this team just oozes confidence.

With a team history of winning, Mercer seems to want to use that as a building block for the future. In the first media availability of 2019, Coach Mercer had a chance to talk about his team.

We asked him what his biggest adjustment since coming to Indiana was, and the answer was surprising. Mercer said:

“The off the field stuff, the administrative work and some of the conference and University rules… The good thing about baseball is that it’s relatively the same. We have great kids and they are winners that know how to win.”

Mercer’s simple non-baseball answer exemplifies the confidence he has in his team and shows that he hasn’t had trouble being handed the keys to this former 40-win program. Traditionally you may suspect he would say getting to know the players or figuring out each player’s strengths and weaknesses, but Mercer picked his off the field responsibilities as his biggest adjustment, which was unexpected. He seems to have had no problem meshing with this group of guys in such a short period of time, saying:

With an entire locker room of fresh faces for Mercer, it’s extremely important for the players to buy in early to help with their confidence on the field and worry about their game instead of what the coach is doing. The players provided reassurance in our interviews that they believe Mercer is a guy that will allow that to happen.

We asked senior Ryan Fineman about the new staff and this is what he had to say:

“He brings in a winning attitude. He wants us to get better each and every day.”

“When you have coaches like Mercer, Parker and Dykes, you just want to get better. You listen to what they say and you’re like wow that couldn’t be any more credible and you buy in.”

It sounds like these players are doing just that. They are buying in and trusting these new coaches without hesitation. This testimony is even more important coming from a veteran player in Fineman, but it doesn’t just stop there.

We asked Matt Gorski on what Mercer has brought to the program and his response echoed the tone of Fineman, saying:

“I’d say nutrition is probably one of the biggest things he’s brought in and their stolen base motto is different from last year and I think what they’ve brought in this year is going to be amazing.”

If you’re a first-year coach, statements like these from Fineman and Gorski are music to your ears. These players trust the direction Mercer is taking them in and they seem willing to match his passion and desire to win in the way they train.

Not only is it nice to see the veterans embracing the change, but wildcard new comers like Tanner Gordon also seem to be finding a home in IU baseball.

When asked if he has felt more comfortable coming to Indiana being that it’s also Jeff Mercer’s first year at Indiana, Gordon replied:

“Oh for sure. All of the coaches have helped me out a bunch. Coach Parker has been working with me ever since I got on campus. Physically, mentally and pretty much every aspect of the game. I can’t thank them enough for what they have done for me so far”

There doesn’t seem to be a lick of doubt in the trust amongst this team and if they can continue to develop their relationship and build on the oodles of talent on the roster, this baseball team is going to be a problem for others. There are nothing but winning attitudes in that locker room and it’ll be interesting what this team will be able to do.