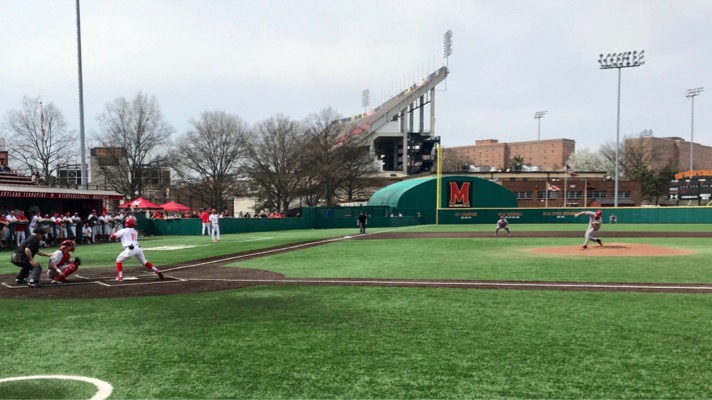 After being shut-out last night and only managing 2 hits all game, the Hoosiers’ bats were ready to go today with a season high 18 hits, 20 runs, and 9 Homers!

What a difference a day makes!

The first 3 Hoosiers to come to the plate today all had hits, starting with a double by Matt Gorski, followed by a RBI single by Drew Ashley, and then a Matt Lloyd HR to instantly make it 3-0. After a pair of strikeouts, Cole Barr scored on a balk to give IU a 4-0 lead, and IU batted around before the reigning B1G Pitcher of the Week Tanner Gordon even took the mound.

The lead-off hitter for Maryland immediately answered back with solo-shot, and with the wind blowing out it really had the feel of the Indiana State game from last week. Little did we know what was about to transpire.

In Lloyd’s second AB, he hit his second HR in as many innings to give him his second multi-HR game of the season. In the third, Grant Richardson (who was robbed of a HR the night before) hit a solo shot to make it 6-1.

In the fourth, the Hoosiers took control of the game. A Cade Bunnell single, Lloyd BB, and Dunham 2 run single made it 8-1, leading to Cole Barr hitting his team-leading 10th HR of the season, a two run shot. Richardson then had a single and was driven in by a Jeremy Houston double. Gorski then hit a 3 run HR, the fifth of the game to cap off the 7 run inning.  The score was 13-1 after 4.

In the fifth, IU kept their foot on the gas, by putting up another 5 runs. A Lloyd double, Dunham walk, and Barr walk set up B1G Player and Freshman of the Week Grant Richardson with a bases loaded situation, and The Kid once again delivered by hitting a Grand Slam, his second homer of the game. Scotty Bradley, making his second consecutive start also joined in the fun by going back-to-back with Grant, hitting a solo shot before the inning closed. 18-1 Hoosiers.

While the offensive fireworks were happening, Tanner Gordon had settled into a groove. From the 1st through the 7th, he only gave up 2 hits after the lead-off HR, and only needed 84 pitches to finish off his 3rd consecutive strong start. Final line, 3H, 1ER, 1BB, 5K.

In the seventh inning of the game, Scotty Bradley hit his second homerun to become the third Hoosier to have a multi HR game.  He finished with three hits on the day.

In the ninth, Richardson finished his ridiculous day at the plate by hitting his THIRD HR of the game! The first Hoosier with 3 since Logan Sowers did it against Ohio in the Lexington Regional in 2016.

IU was extremely efficient today, scoring 20 runs on 18 hits, with 12 extra base hits, only leaving 6 on base for the game, with 0 errors committed.

Also of note, Ryan Fineman left the game after his at bat in the second inning, and Drew Ashley exited the game after taking a helmet to head shot making a tag at second base. The team is already without Tommy Sommer and Logan Kaletha, hopefully it was precautionary, and not serious. Would be nice to be healthy.

Not sure what Coach Mercer said to them after last night’s game or what the pregame spread was, but I’d recommend they stick to that formula.

The Hoosiers will look for a series win tomorrow afternoon with a 1 PM EST first pitch scheduled.