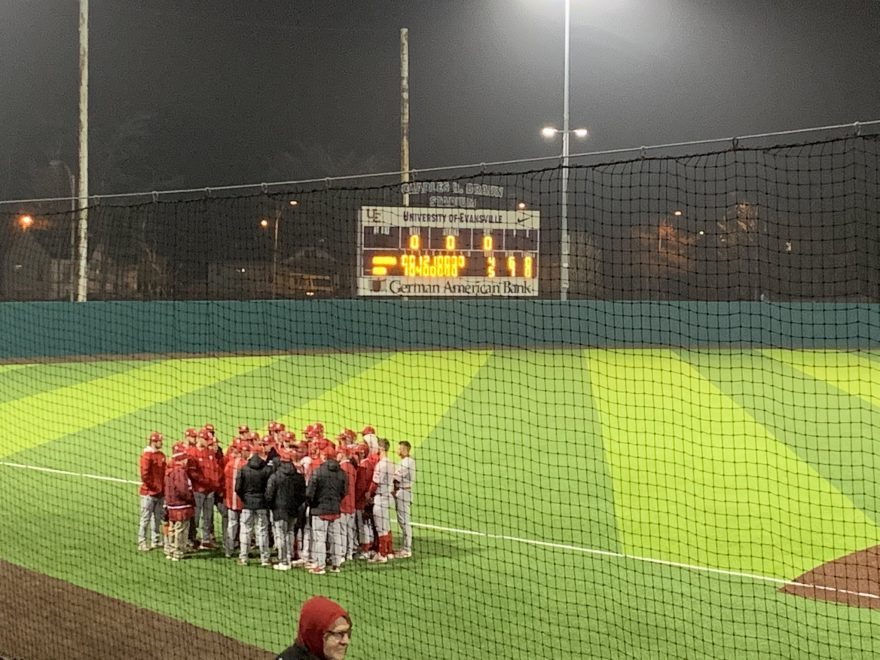 It wasn’t even a month ago when I was watching Drew Ashley come to bat in the first inning of the season at Alex Box Stadium. It is now March 12th and the college baseball season is over. Just done all of a sudden. This piece is more of a stream of consciousness than an article or opinion piece.

Indiana University announced on Tuesday that students would be taking classes remotely for the two weeks following Spring Break. I soon heard that the Ivy League had canceled all spring sports. Then just wave after wave of announcements hit. Each one more drastic than the next. The Big Ten would play games without the presence of “non-essential” personnel. By the time that hit, it felt inevitable where this would lead as one conference went farther than the other.

Today, Thursday March 12th, the season was over.

Now I’m not going to get into the details of Pandemic response and the argument of whether this was justified. I just want to talk about this moment. As a fan, I feel a little guilty for having such a loss reaction to this. All year round I look forward to an Indiana Hoosier baseball season. I prepare for the ebb and flow of a 13-week season and a potential month of post-season. Of course I am not a player, coach, or family who have such a greater personal connection. To know the kind of work that goes into a team like this to play 5 games in the past 5 days and then with almost no warning just have the season come to an end.

My first thought was of Jeremy Houston. I’ve watched Jeremy play for almost four years. He’s worked so hard, had great moments, and also endured some difficult slumps. This year was his time. He was the shortstop, a critical piece to the team, playing every inning. Now it is just over. And then the rest: Cal Krueger who battled his way back to a key role in the bullpen. Braden Scott who was having a relief pitching season on par with some of the Hoosier greats. Grant Sloan who threw some key innings in the Hoosier’s 2019 Big Ten tile run. And then the seniors we barely got to know: Jordan Fucci, whose bat was coming alive. Grant Macciocchi, who had just one at-bat before injury. Collin Hopkins who was a big surprise as a solid rock behind the plate.

And now so much is in the air with eligibility and the MLB draft. Those discussions will come in time. Tonight I just think about the fact that these guys gave so much to us as fans. The nutrition, work outs, weeks of individual practice, the full life of a student athlete, and we got to watch them compete. Most of them we got to watch earn and celebrate a league championship. I feel empty tonight because I don’t get to watch them play many more times over the next three months. The College baseball season seems short as it is, but now the thought of getting to June without baseball looks to be a long slog.

Personally, this was the first season that I got to go to opening day in person. That trip down to Baton Rogue was a memory of a lifetime. And this team showed so much growth and promise on such a huge stage to start the season. It was the most hopeful I had been after the opening weekend, even with the series loss. I’m still hopeful for the future of the program, and I know I will be happy again in a year’s time. I also know, not all of these guys will be there. They only get to experience it for a short time. You see the passion they put into it, and I can only imagine what that must be like.

I appreciate every one of these players. I know you don’t do it for the fans. There is a love of the game all to itself. But I want to say, “Thank You” because you do bring joy to those of us who follow this team and watch you play. I realize this is so much more personal for so many, but at least take some pride in how much you have touched the lives of the fans.