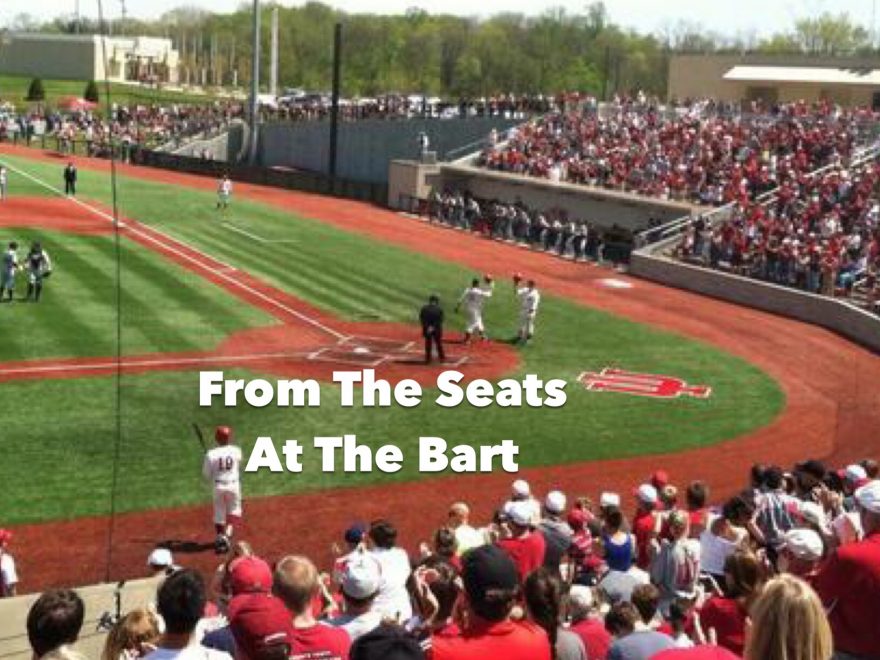 Our third entry for From The Seats At The Bart comes from T.C.

You can find him right in the front row near that Hoosier dugout with his wife and son pretty much from Batting Practice on.

I never considered myself a baseball fan. I had watched some games, of course. I’m
married to a diehard Cubs fan, so that was unavoidable. But didn’t pay that much
attention to the game. I didn’t follow particular players, though I recognized names,
and I didn’t keep track of any teams’ progress through a season. I considered familiarity
with sports a social skill, something I could use in social settings as needed. In
Indiana, if you couldn’t converse at least at a primitive level about basketball, then
you were pretty well ostracized as a heathen (at best).

But my son was getting to age of having greater interest in sports, and he started with
T-ball and the usual track. Bart Kaufman Field had opened and, as an employee of IU, I
could get complimentary tickets to baseball games; so we decided to check out the IU
baseball team that year. We attended lots of home games, and our son was really enjoying
meeting the players after the games. My son’s favorite was Kyle Schwarber, of course, as
he was trying his hand at the catcher position in rec league. Sam Travis, Joey DeNato,
Casey Smith, Dustin Demuth, Aaron Slegers, it was quite the list of players that year.
But one player stuck out for me. A role player, off the bench, short of stature (he was
only 5’7″) compared to the giants around him. Never stood out particularly, except that
you could tell by watching him that was giving everything he had, every time he was in
the game. The sports euphemism would be that he “had a lot of heart.” He became my
favorite player, as I have often rooted for the underdog. Number 29, Chad Clark.

IU advances to the NCAA tournament that year as a No. 1 seed, hosting a regional
tournament. The first game was against Valparaiso, the No. 4 seed. It wasn’t expected
to be a huge challenge for the Hoosiers, but Indiana trails for the first 7 innings. Then,
our favorite steps up to the plate and gets an RBI single to put IU on the board. The
game is still in reach, down only 2 to 1. But the 8th inning, the Hoosiers come up
empty, and the games goes to the top of the 9th, hope still intact. But tragedy strikes
for Chad. He is late to the bag at second and the bases are loaded for Valpo. The next
hitter slams a ball right at Clark at second, but he misplays it. Two runs score; IU is
down 4 to 1.

Now this is all happening in front of a standing-room only crowd at the Bart, over 3000
people. This is an incredible crowd for baseball in the basketball state of Indiana. The
energy in the crowd is high throughout the game, even with IU trailing the whole way.
Until the Clark errors. There is a palpable exhale from stadium. The energy in the
crowd just blows away with the cheering of the Valpo fans. My heart hurts for Chad. The
player that gave everything, every day, every play. I felt defeated for him.

But, as Yogi said, it ain’t over till it’s over. Valparaiso brought in their dominant
closer, who had barely given up a hit all season. It starts off poorly for the Hoosiers
as Scott Donley grounds out. But then Mike Basil singles and Demuth doubles to bring a
run in. The crowd begins to stir. Casey Smith steps up and doubles, sending Demuth home.
The crowd roars back to life, as IU is only down 4 to 3. The anticipation in the stands
is electric; the place practically vibrates as no one is sitting down anymore. Coach
Smith sends in Chris Sujka to pinch run for his son, Casey.

Chad Clark, the goat of the top of the inning, comes to the plate. Everyone saw what
happened. Everyone knows that Chad is not in the game for his bat. But everyone also
knows that this is the moment of redemption. All he really has to do is move the runner
over to third; nothing else is really being asked of him, though the opportunity to score
Sujka is there for the taking to tie the game.

Chad takes a strike on the first pitch. No one is breathing in the stands. At this point,
I notice that I’m holding my breath with each pitch. The baseball non-fan. I am totally
consumed by the game, the emotion, the moment. Then, the Valpo closer hangs a slider over
the plate, and Chad Clark, who had not hit a home run the entire season, rips the ball
over the left field fence. The crowd watches the ball and erupts into a thunderous roar,
as Clark rounds the bases and acknowledges the fans when he heads to home plate. In the
briefest of moments, the goat becomes the hero, and I experience Chad’s elation at the
instant of his redemption.