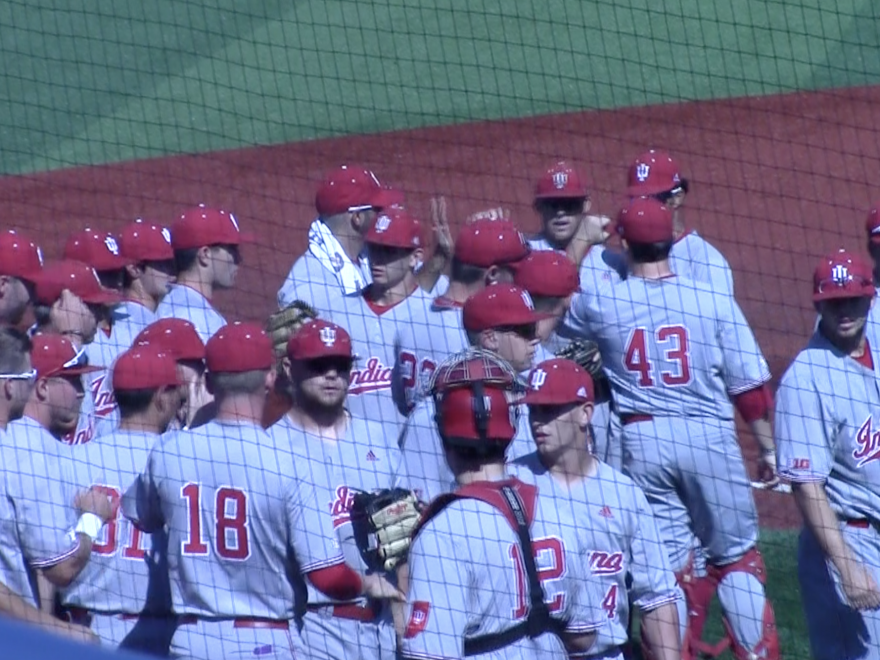 In game one, the Hoosiers made a sixth-inning comeback with Matt Gorski scoring the go ahead run on a wild pitch before Cal Krueger closed the door to get the save. Andrew Saalfrank gave up both Louisville runs in the fifth inning but did manage to get the elusive third out and earned the victory.

The second game, a somewhat bizarre affair, saw the Hoosiers fall to the Cardinals 5-2. Louisville pitchers managed to fill the bases with Hoosiers via 3 walks in each of the first 3 innings. Despite this, the Hoosiers did not get a hit until a Logan Kaletha double in the fourth, and did not score a run until Carter Bridge drove in Cade Bunnell with an RBI triple in the 6th. Tanner Gordon was impressive in his first inning of work striking out the first three Cardinals he faced. He did give up a a trio of hits and one run in the second inning taking the loss.

The highlight of game one for the Hoosiers was Matt Lloyd’s at bat in the third inning of the first game. Facing a Louisville pitcher throwing in the mid 90’s and a 1-2 count, Lloyd fouled off multiple offerings before driving the ball for an RPI triple.

On offense the Hoosiers were extremely patient at the plate, seeing a lot of pitches. The Hoosiers drew 17 walks and struck out 16 times in the combined 12 innings.

Conversely, the Hoosier pitching staff only gave up three walks in both games. All of those came in the two scoreless innings pitched by Cam Beauchamp in game one. In total 9 Hoosier pitchers saw action. Mercer allowed every pitcher to complete their own frames making all pitching changes between innings.

Defensively, the Hoosiers put on a nice show. Left-fielder Drew Ashley got an outfield assist in game one throwing out a Louisville base runner attempting to stretch a single into a double. In the last three innings of game two the left-side infield duo of shortstop Justin Walker and third baseman Matt Lloyd (his first time at the hot corner in a Hoosier uniform) combined for a trio of highlight worthy plays. Catcher Wyatt Cross also threw out a Cardinal base-stealer.

Hoosier hitters only managed 8 hits on the day. The good news for the Hoosiers was that all but the last of those was for extra bases. The bad news was that none of those hits came when the bases were loaded in each of the first three innings of game two.

Overall the disciplined play was very impressive. The coaching staff has been focusing on individual work for the first five weeks per Greg Murray’s interview with Mercer earlier this week. In that interview, Mercer expressed concern with defensive performance, but none of those fears seemed to materialize on the field Saturday.

The Hoosiers have one more fall opponent. They will face off against Southern Indiana at Bosse Field in Evansville, Indiana, on October 20th.