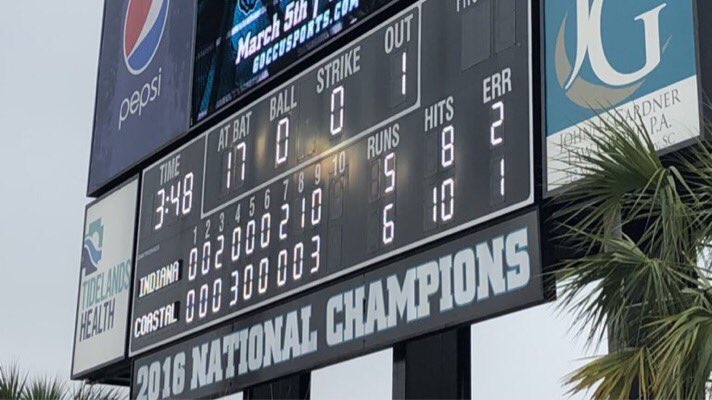 Sloppy play and free passes prevent Indiana from getting the weekend sweep.

Indiana was in control of the game, leading 5-3 going to the bottom of the 9th inning. But then the Hoosiers give up three free passes, including a bases-loaded walk, and a pair of hits on the way to a 5-6 defeat.

The other three Chanticleer runs came in similar fashion in the 4th, as Coastal sent nine batters to the plate while recording just one hit. In that inning, Indiana gave up three free passes and committed a pair of errors before Cal Krueger cleaned up the mess with a bases-loaded strikeout.

On the mound, both Krueger and Andrew Saalfrank looked strong, combining for four innings of shutout baseball with five strikeouts. Saalfrank also had a big moment, as he stranded a one-out triple with a strikeout and groundout.

The offensive side of the ball was equally streaky, with Indiana getting the leadoff man on in six of the nine innings but failing to bring him home in three of them. The Hoosiers managed to work some free pass small ball of their own in the 3rd inning, where a pair of walks, a single, a sac fly, and an error were enough to score a pair of runs.

Indiana then regained the lead in the 7th with four singles, but a double play limited the damage to another pair of runs. Cole Barr then provided what at the time was an insurance run by smashing the first pitch of the 8th inning beyond the left field wall. The Hoosiers had a runner on with just one out later in the 8th, but again hit into a double play to end the inning.

Several Indiana batters had solid games. Matt Gorski managed to walk in his first three plate appearances before hitting a single; he would go on to score to give the Hoosiers the lead. Drew Ashley was responsible for a pair of RBI on a single and sac fly, while Matt Lloyd rounds out the RBI club with an RBI on two singles. Jeremy Houston also had a multi-hit game, and would go on to score both times. While he didn’t have a hit, Justin Walker also racked up a trio of walks.

Theoretically, the Hoosiers will host Indiana State at 4pm ET on Tuesday, but the forecast is currently calling for a high of 24 degrees that day, and IU softball has already cancelled their game scheduled for that day. The weather on Wednesday looks no better to try to bump the game one day. In reality, the Hoosiers will next travel to Seattle to face Washington on Friday with the dreaded West coast first pitch time of 10pm ET.