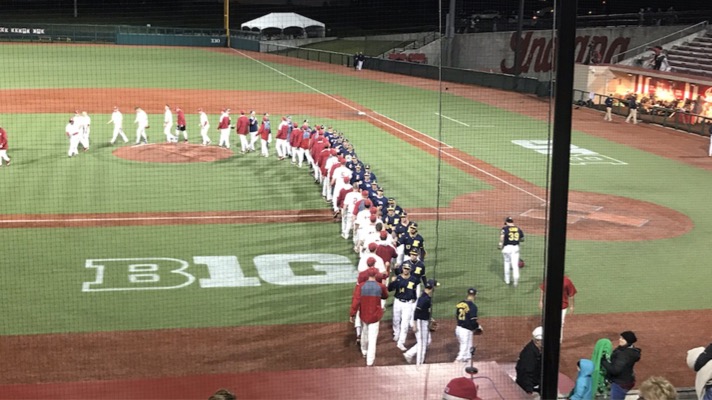 Indiana dropped its first home game under Jeff Mercer in dramatic fashion with a 9-8 loss to Kent State in 12 innings. Indiana had some big hits, but the mistakes were too costly, and the Hoosiers weren’t able to pull it out.

Cam Beauchamp started what would be an all hands-on deck game for Indiana’s pitching staff. He posted a scoreless first, but a mistake riddled second inning started the Hoosiers off on a sour note. Three errors, two hits and poor bunt coverage allowed Kent State to jump out to a 4-0 start with all four of those runs coming unearned.

Cole Barr quickly put the Hoosiers back in contention with a leadoff solo homerun that sparked a bit of a rally only to be ended by Wyatt Cross. Cross hit into a double play while also plating a run to bring the score to 4-2.

It wasn’t until the bottom of the fourth that the Hoosiers would find anymore production. A leadoff walk by Elijah Dunham and a Tyler Van Pelt single put Indiana into a good spot to score. Jeremy Houston then sent a ball to third where a throwing error brought both runners in and tied the game at 4-4.

Fast forward to the seventh with Conner Manous pitching for the Hoosiers which resulted in a lead change. A leadoff double, a walk and an error brought another Golden Flash into score to make it 5-4.

Cal Krueger came into pitch in the eighth and it was a lot of the same. A walk and a stolen base brought in another run for Kent State to extend their lead to 6-4. Kent State wasn’t earning their runs, but rather Indiana was just giving them away.

That’s when Indiana started to find some luck with their bats. Elijah Dunham and Matt Lloyd went back-to-back in the eighth with two solo shots to tie the game.

The score would remain until the eleventh inning where Indiana’s pitcher Braden Scott had a bit of a meltdown. Scott walked the first two and a balk put those runners in scoring position. An intentional walk followed by a single made it a 7-6 ballgame and then a hit batter extended it to 8-6.

Indiana’s luck wasn’t done just yet. A two-strike double to center field from Scotty Bradley gave Indiana some hope. Wyatt Cross took that hope and ran with it by driving a game-tying home run to center field to make it 8-8.

Austin Long would then take over on the mound for Indiana. Long walked two and a passed ball moved the runners to second and third. Alex Franklin would then come in to replace Long. A wild pitch from Franklin scored the Golden Flashes final run and the clock struck midnight on Indiana’s magic leaving them with a 9-8 loss.

Indiana had no business being in this game giving up 12 walks, hitting four batters, and throwing two wild pitches between nine pitchers. That’s not to say there wasn’t any pitchers who threw well. Gabe Bierman threw three innings of no-hit baseball and Matt Lloyd threw a solid two innings allowing just one hit. The doozy was the six fielding errors and countless mistakes for Indiana.

The Hoosiers figured out that they can’t expect to win with dominant performances, but rather doing the fundamentals right and they’ll be a better team for it later.