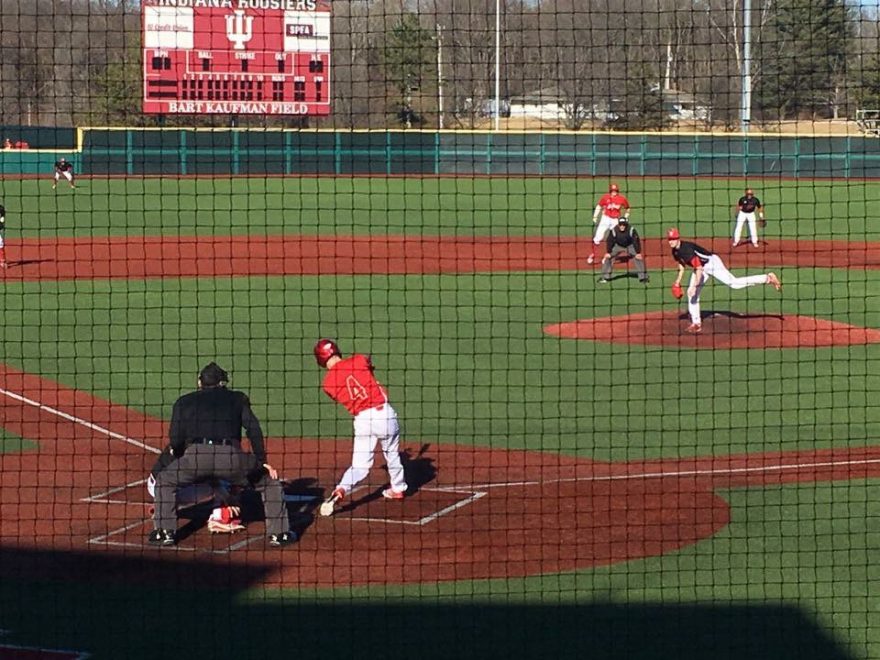 Today was the first day of official practice for Division 1 College Baseball. Luckily, The Team of the North enjoyed 58 degrees and sunny weather in Bloomington. That kind of weather meant Hoosier Baseball was able to scrimmage outside at The Bart.

As expected on the first day, there was some good, some bad, and a look at some new faces to the team.

As far as the new comers go, RHP Connor Manous (#27) showed a nasty curve and got out of jam leaving runners on, 1B Elijah Dunham (#21) got a big RBI hit for the Red Team and OF Logan Kaletha (#11) had a few big hits and showed off his wheels.

Second base has been a question because of Tony Butler’s departure. Today Cade Bunnell (#4) was playing 2B for one team and Matt Lloyd manned 2B for the other.

First base has also been a question. Today Scotty Bradley played for one team and Elijah Dunham for the other.

Ryan Fineman did Ryan Fineman things. A big homerun off Saalfrank that bounced off of the scoreboard and he backpicked a runner of off first base that had to big of a lead.

On the other side, there was some questionable base running, some errors and some strikeouts with RISP.

Just getting a chance to practice outside  at The Bart on January 26th has to be considered a victory for The Team of the North today.