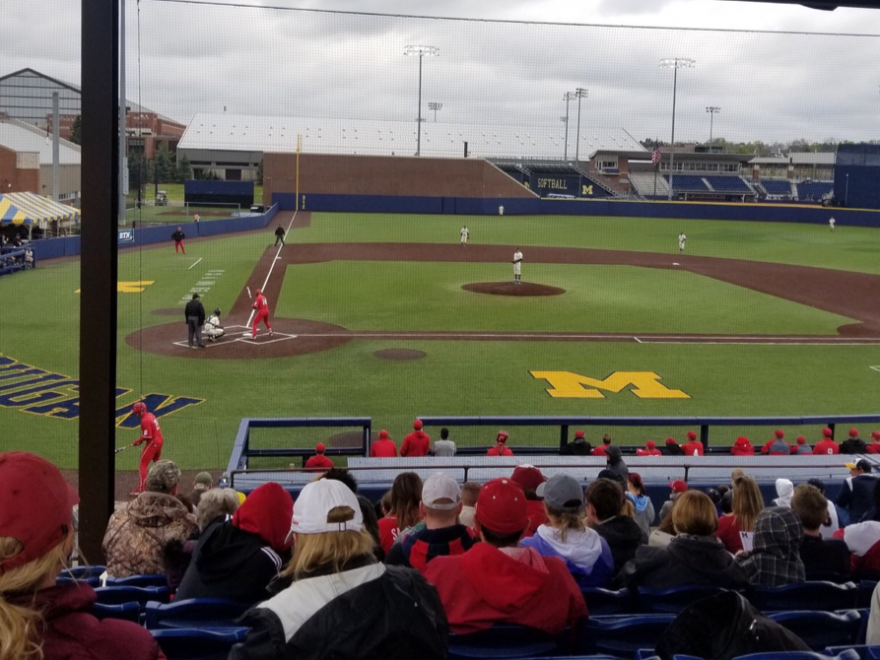 Control of the B1G Title was on the line today. It was the Heavy Weight Fight we deserved.

The Hoosiers came into the game controlling their own destiny. Win the next 4 conference games and they are outright champs, regardless of what else happens.

Coming into the game, everyone knew that these two teams had the best Sunday starters in the league. Andrew Saalfrank and Michigan’s Jeff Criswell were as advertised through the first three innings before IU drew first blood in the top of the 4th inning. Matt Gorski was given a second life after the catcher dropped a pop-up in foul territory. He took the next pitch for ball four. Criswell then threw a ball away trying to pick-off Matt, allowing him to take second. An error from the SS followed. Matt Lloyd then walked, and Gorski then scored via a second errant throw to first by the pitcher, their 4th error in the inning.  Unfortunately, the Hoosiers were only able to score 1 run in the inning as Cole Barr followed with a strike-out and Sam Crail hit into a DP.

IU tacked on another in the top of the 5th with Ryan Fineman scoring on a passed ball, making it 2-0.

Michigan did what the Hoosiers did yesterday and immediately answered with 2 runs in both the bottom of the 5th to tie it up, and then with 2 more in the 6th to take a 4-2 lead.

The Hoosiers punched right back in the top half of the 7th by retaking the lead with a 3 spot, via a Gorski 2 run single (with Walker making a tremendous read from second), and a bases loaded walk by Cole Barr to make it 5-4

Michigan answered immediately with the tying run in the bottom half on a two out double.

This ended up being an 11 inning game. Gorski’s hit would be the last the Hoosiers could muster, with the only other base runners being a pair of walks in the 9th.

Michigan walked it off on a bases loaded fielder’s choice that was misplayed on both ends to win 6-5. The Hoosiers drop to 33-18 on the season, and 14-7 in the B1G, 1.5 games back of Michigan.

It was a disappointing ending to a winning weekend, but it was a title worthy battle!

The Hoosiers will need some help this weekend to win the B1G regular season title, but you’ve got to love how they bounced back consistently this weekend!

Up next is Louisville at The Bart on Tuesday night at 7 PM.